Allow me to start by making a statement of opinion: I am not a fan of The New 52 Harley Quinn writing team or the work they have done on the series. The review you are reading is a reflection of that opinion, and I understand that there are readers who appreciate this series. I do not wish to put off that audience. While sales suggest this audience is turning away from the series, the readership was strong and committed to the point that, unlike almost every other DC title, the creative leads on the series were not changed over or stories reset by the Rebirth event. This was a disappointment to me, but there have been suggestions of a shift in story that might occur.

Please be aware that from this point on there will be spoilers for some of the Harley Quinn series, specifically the more recent issues with the return of the Joker. You have been warned. 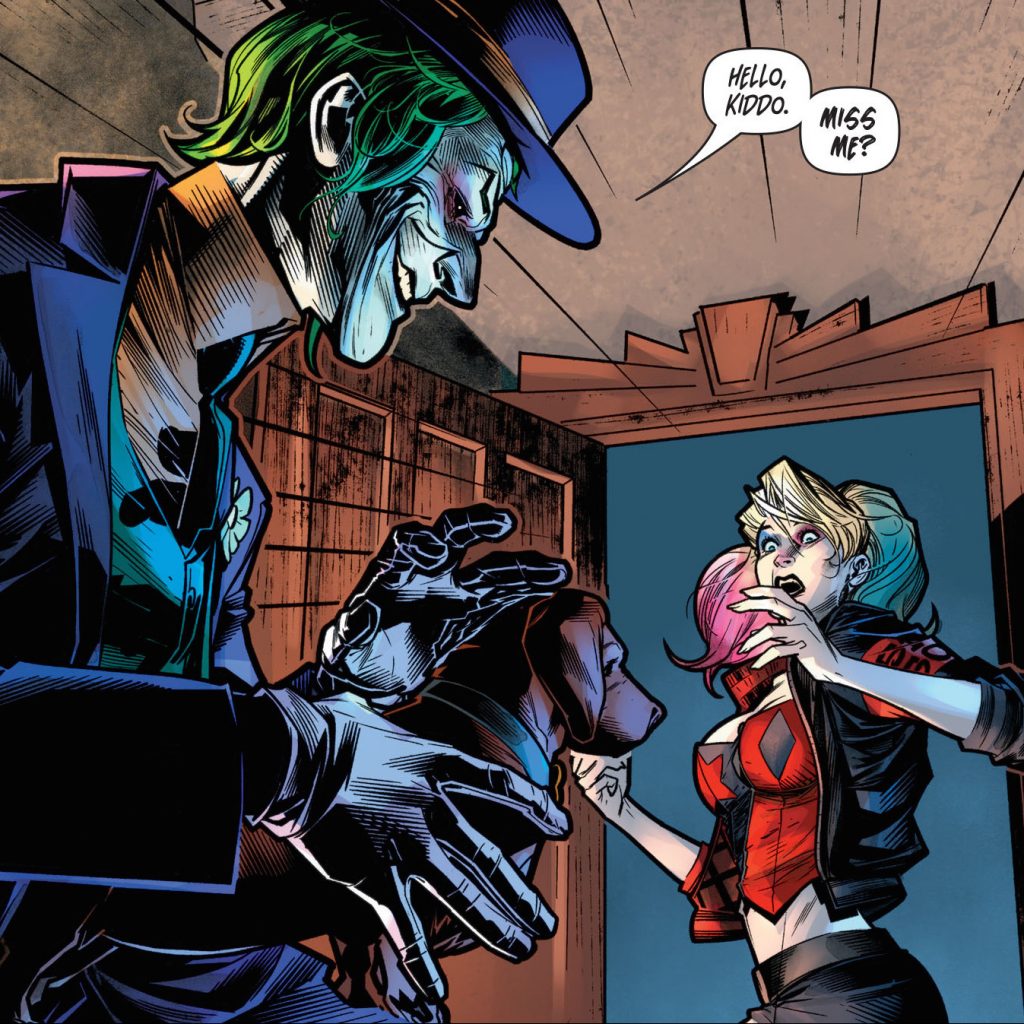 I have not read the complete series of The New 52, now Rebirth, the Amanda Connor and Jimmy Palmiotti Harley Quinn, but not for lack of trying. I find their stories inconsequential and shallow, and feel that the character they are working with now, that their continued storytelling has created, has little similarity to the 25-year-old character that shares it’s name. However, this is not to say that Harley Quinn cannot survive on her own without The Joker, a choice that much of these stories works with, or that she cannot hold her own in a title of her own. Her early 2000s series and Gotham City Sirens both demonstrate otherwise. Any reader, fan base included, who claims that stories involving this character needn’t or shouldn’t have depth are simply incorrect. Characters change and evolve, but this character isn’t only dissimilar to what she had been but has been stripped of what one would consider character. Removing her of larger, more worthwhile conflict has created mostly a vehicle for jokes and innuendo that is great for selling products and looking good on covers. Outside of character issues, I find the writing in itself difficult to follow. I won’t make sweeping statements; most of these critiques are reflected in the recent issues that I want to comment on. All of this said, let’s focus on the most recent issues of the series that offer a carrot to fans of the origins of the character and a possible relationship with Joker. I tuned-in and read the series when there is a story being told that interests me. Recently, the series has courted fans who want to see Harley in a more consistent relationship that reflects her history, grounding her in her roots between Joker and Poison Ivy that were cemented in Batman: The Animated Series. A few panels went viral and created discussion and debate when Harley seemed to finally answer the will they/won’t they with Joker.

He attacks her, forcing himself on her, and she bites his lip, leaving him bleeding on the floor and stating she will never follow his demands again. Many fans liked this, as it demonstrated her ability to overcome abuse and gave her growth beyond being a subsidiary character to Joker. Issues followed in which Harley and Ivy are shown solidifying their relationship, with Harley asking to become something consistent. This story was done over several issues, and the answer from Ivy delayed by a story of their vacation adventures. Finally, she states that she can’t commit, because of her responsibility to plants. Really. 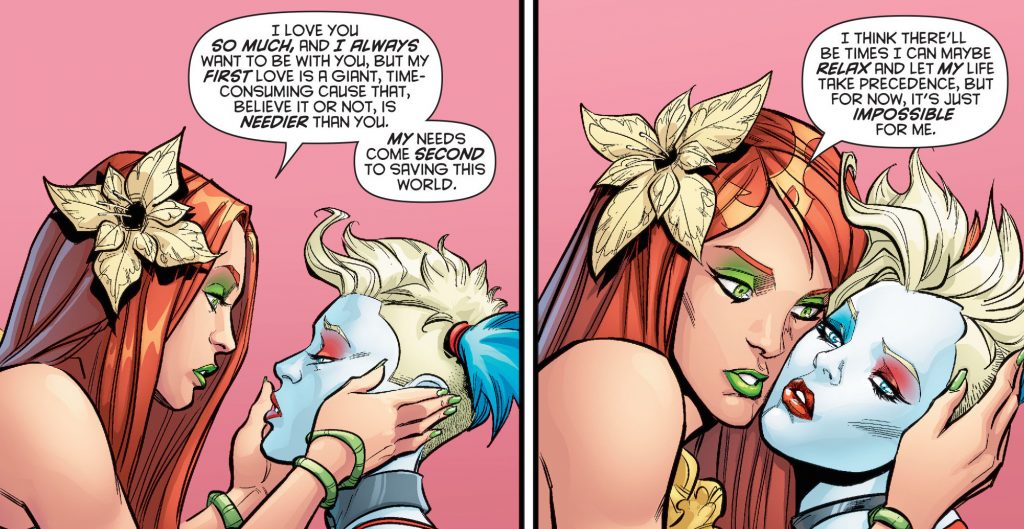 While I understand the concept that Ivy’s mission is more important than her relationship with Harley, there are no stakes that dictate the need for a choice. There is nothing pressing that keeps Ivy from spending her time with Harley and nothing that kept her from taking a vacation and participating in adventures with Harley any more than she would be creating adventures individually.

At that juncture, I tuned out again. However, it didn’t take the creative team long to create a new relationship option, one that interested me within the confines of this canon: Joker wants her back.

Issue #9 shows Harley returning to the roller derby and once more fighting someone who beat her in an early comic, Bertha. Someone in the audience kills Bertha when she is close to murdering Harley, saving her. The rest of the comic is essentially padding with multiple dream sequences that are cute but have little importance. Yes, we know Harley is weighed by her past with Joker. Yes, we know Harley likely remembers her affection for Ivy sweetly. Outside of reminding us of that, these sequences do little. There is also a small subplot in which Harley buys some pizza, stops a robber, and gets free pizza for life, giving some to a homeless man. These sorts of stories are common in this series, attempts to show Harley as compassionate and human in extremely hammy ways that otherwise aren’t important to the plot. The disjointed subplots and dream segments make for stories that are difficult to follow. These minor plots, attempted to actually convey some form of character, are often more limited in page count than fluff, making them difficult to take with weight. The comic ends with Joker being in Harley’s apartment when she gets home. 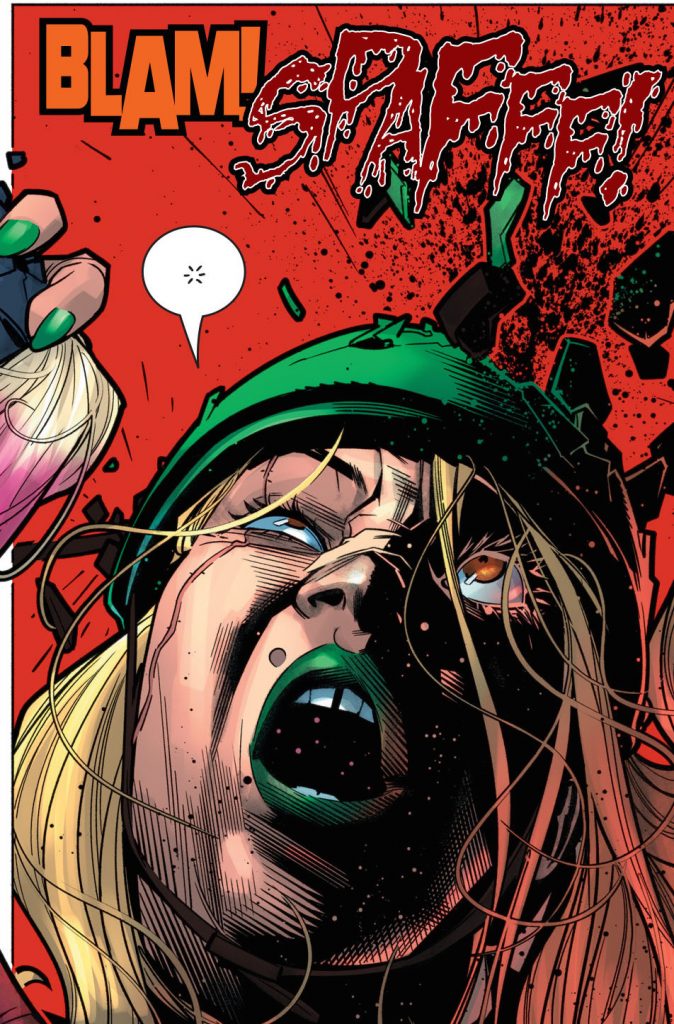 Issue #10 is a holiday comic. Issue #11 starts with a terse discussion between Harley and Joker where he asks her to meet him the next day in public to show he is a changed man. It then reacquaints readers with Red Tool, a parody character intended as a stand-in to answer the fan question, “what would a relationship between Harley and Deadpool be like?” The answer is “uninteresting.” Deadpool may be intentionally grating and verbose, but this character shares none of that wisecracking brevity or fun. Red Tool is essentially a guy in a suit similar to Deadpool who seeks to protect Harley because of an attraction to her. His dialogue is wordy, yes, but it isn’t written to be fun or clever. It’s lengthy because they haven’t resolved how to show story instead of tell story, an issue I have always had with these comics. That isn’t to say the dialogue reads like exposition drop. Between the accents they awkwardly write into each character and the choices made in speech layout, it can be difficult to follow what is being said between forced catchphrases and supposed colloquial language. Red Tool makes Joker leave and Harley intends to meet him later. The pair return to an earlier unfinished plot of a door on the carnival lot that is locked. They break the door with grenades and find a monster inside. Similarly, this story is short, depicting it as insignificant, despite there being lots of questions about a huge goo monster. Escaping it, Harley returns home exhausted and sets her clock to meet Joker. Instead, Red Tool meets him.

Issue #12 has Harley sleeping through the meeting because Red Tool changed her alarm, and the two men exchange words. Joker tells him he will not fight. Red Tool then beats him. Harley is woken by the noon bells and realizes her alarm was changed. She hurries to find Red Tool beating Joker, telling him to stop and that, because of the altercation and change of her clock, she will not speak to him for a month. She takes Joker home and ties him to a chair, blindfolding him and taking him into the city. Joker demonstrates he does not intend to harm her. His dialogue is somewhat unusual, little of it seeming like it is coming from the character. He rarely smiles or makes a joke. This can be attributed to his hope to show himself as a “changed person,” but to me, personally, it simply feels out of place. Harley leaves him in the middle of the road with a sign that says “Brooklyn Sucks.” He is beaten and run over by several drivers. While the comic is billed as a conflict between Red Tool and Joker, it really isn’t. Joker takes the beating and Red Tool is shown as a bully. While Joker isn’t depicted as a victim, really, he is more of a mannequin; the reader doesn’t feel bad for him or validated for Harley’s choice to have him harmed. The actions he takes, or lack of, seem so lifeless that it comes across as totally inconsequential, something that has always been the main issue with the series.

In all, the attempt to draw in fans of Harley and Joker as well as fans of Harley who don’t want her to return to Joker is unsatisfying for either. Joker does little, Harley doesn’t make a choice, and the most significant encounter is Red Tool’s leaving the story for what will likely be the duration of this arc, something fans of Red Tool will be frustrated by. The choice to show Joker as less aggressive towards Harley is presumably a response to the reception of Joker as a more compassionate character in Suicide Squad. With the abuse removed from the final film, fans can subscribe to their relationship with limited backlash and DC can sell more merchandise that references their partnership. That said, one of the biggest criticisms of the merchandise is also one of the strangest parts of this story up to issue 11: Mad Love.

“Mad Love” is the story that summarizes the pair’s union and depicts their backstory that every version since has worked around, up until The New 52. And this issue of Harley Quinn either redraws and re-contextualizes or flat-out blatantly reuses panels or concepts originally presented in Mad Love. These panels are some of the most interesting and engaging pages of these issues, and that’s the problem, because these stories didn’t exist in this canon until now. Harley in her nightie with bleached skin doesn’t seem unusual, but it depicts a version of this character, and her relationship, that carries more depth and subtlety than this series has offered. Not only do these panels serve only as a reminder of what both was and what this series struggles to be, many of them are improbable or impossible in the canon of this series. This is not only a problem in writing, but serves to demonstrate what fans want against what they choose to give us. These panels serve to do little more than to bait readers with a strong reaction to the original stories, with either affection or disdain. If references to other stories, stories that the series has mostly ignored or worked around in unsubtle ways, is the most appealing part of your current series, that series has, no pun intended, issues.

While this arc will likely see Joker warming in Harley’s opinion, the handling of this concept over the current series seems more like a choose your own adventure but not for the reader, rather for the staff. The series will be predicted by responses, each issue ending without resolution and being drawn out similar to the story of Harley and Ivy. At best, they will make a choice that will violate the trust of a group of readers. At worst, there will be little movement in the story, something this series has struggled with for years, and while no one will be entirely put off, no one will be served, either. In other words: please tell us a story.