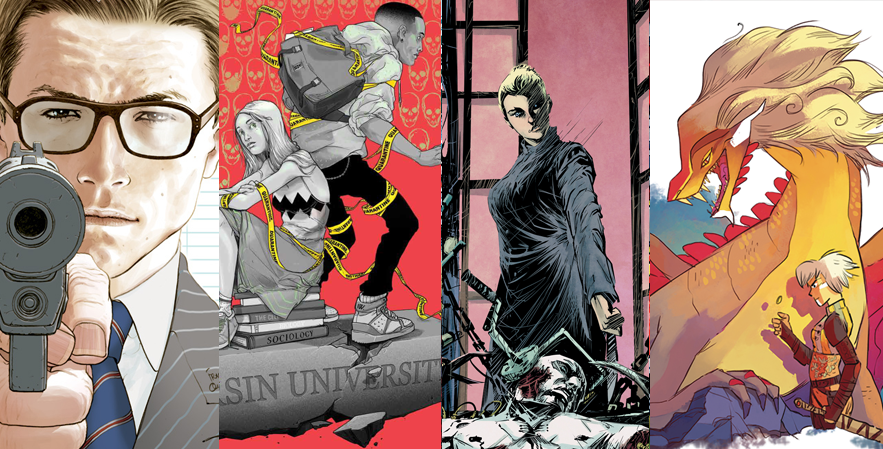 Aaaannnd we're back! I can't believe it's been a month since my last installment here. So much for making it a regular feature...Hopefully I can keep it up though! To be fair, there were a few weeks of weak new comic offerings, that I didn't feel passionately enough about to write, and then I spent a week abroad. But I'm back and ready to talk about new comics with you all, so buckle up! 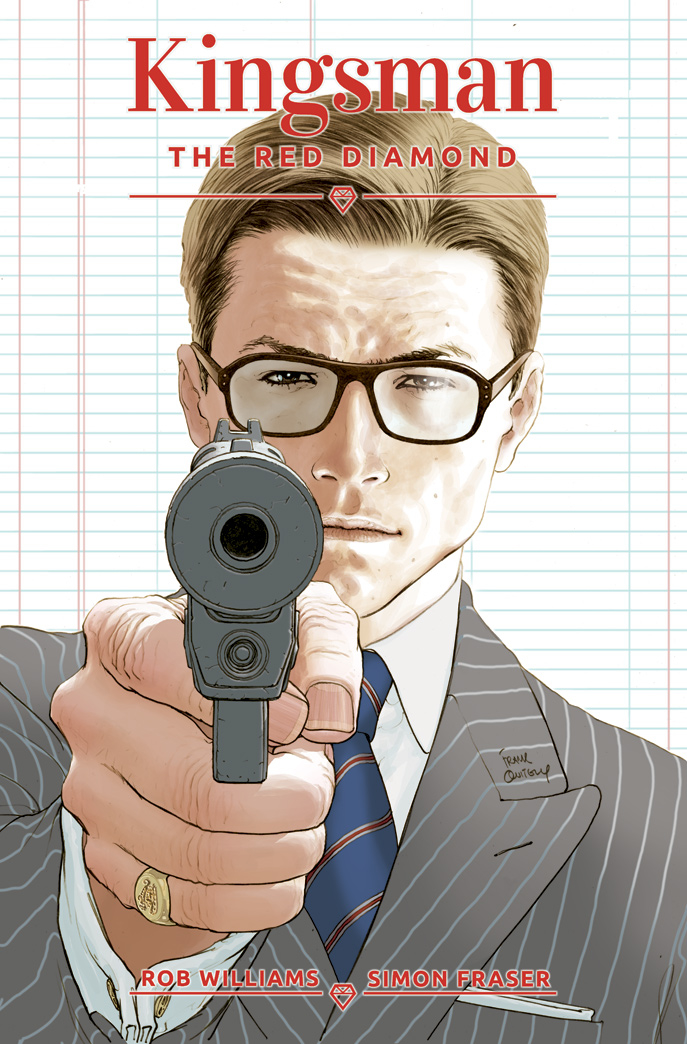 "Kingsman: The Golden Circle (starring Channing Tatum and Colin Firth)is in cinemas in September, and we're launching the sequel to the hit comic book series by MARK MILLAR and DAVE GIBBONS with KINGSMAN: THE RED DIAMOND. Working-class super-spy Eggsy follows in his mentor's footsteps but is still rough around the edges for a Kingsman agent. Rejected by his high school crush and hot on the heels of a rescue mission to save Prince Phillip, he embarks on an international terror plot in a story that starts where James Bond draws the line. ROB WILLIAMS (Suicide Squad, Action Comics) and SIMON FRASER take the helm for this stunning six-issue miniseries."

While it would be tempting to compare this comic to the original Kingsman series, I'm not going to do so for two reasons - A) I haven't read it (I respect what he does but I'm just not a blind slave to everything by Mark Millar) and B) no one on the original creative team from the original run of Kingsman is involved with this book, so why bother? One of my coworkers insists that no one is going to care about this book for that reason, and because movie tie-in comics are always bad. But I was surprised when, upon reading this, it wasn't actually a movie tie-in. Sure the cover art looks like Taron Egerton but the interior art doesn't resemble him at all. I decided to try and come at this like it was its own thing, and tried to let my knowledge of the movie not impede on me too much. As it stands, this is an enjoyable spy read about how people change when they leave their home, but with more assassination attempts. I do feel like it is helpful to have at least seen the movie beforehand, as I got along fine, but it might be missing personality if you can't mentally inject their cheeky british accents, and the movie's sense of humor doesn't necessarily carry if you don't know it's supposed to be there. This was better than I expected and I guess that's all I can ask for. 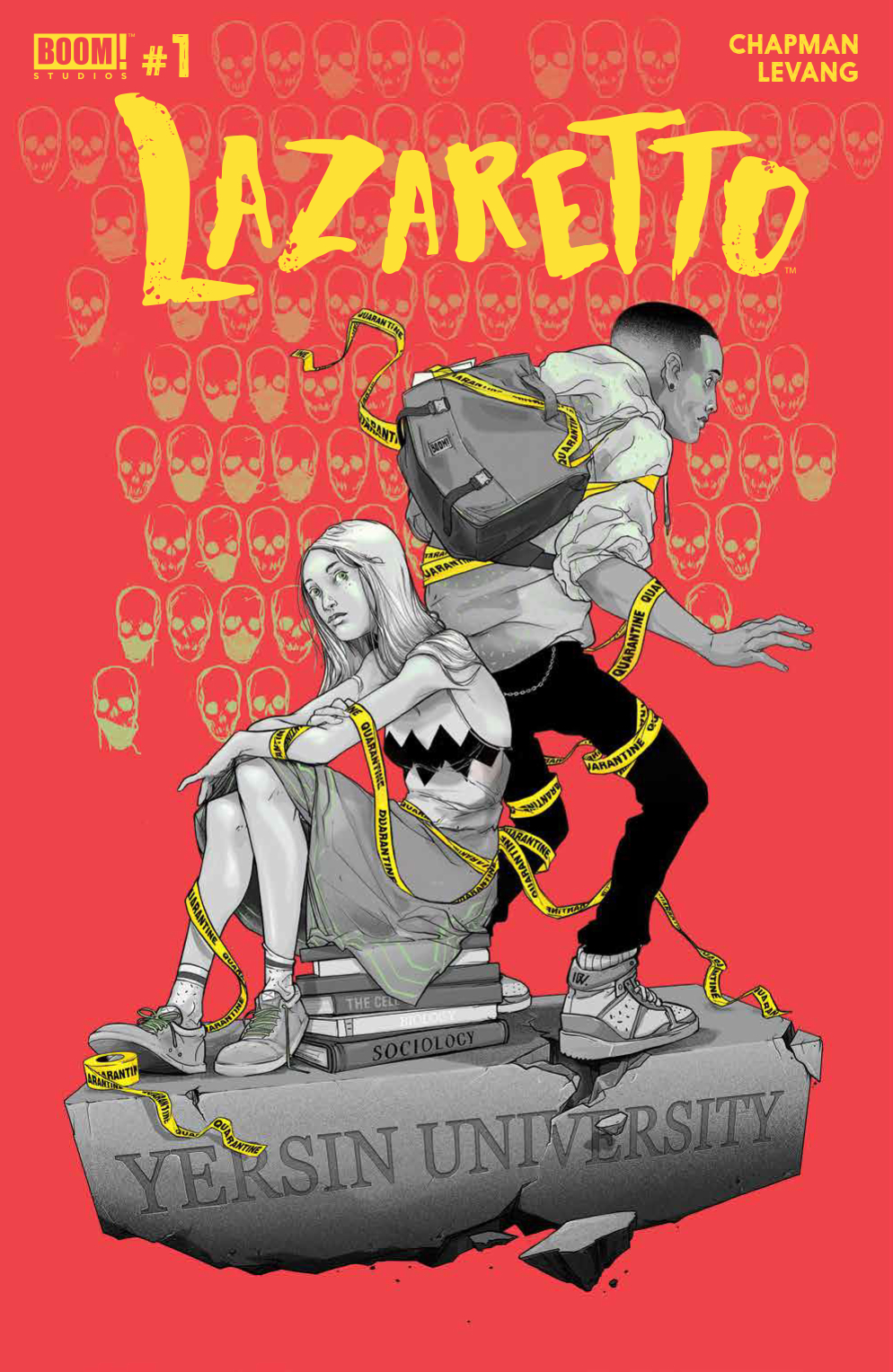 "After a pandemic strikes, a dorm complex at a small American college is quarantined with all of the students trapped within. What first starts out as youthful freedom from authority soon devolves into a violent new society-it's Lord of the Flies on a college campus."

I've said it before and I'll say it again. I'm sick to death, no pun intended, of zombie stories. But if this is a zombie story, I might have to eat my words (Is that a pun too? Some kind of intellectual cannibalization?) Lazaretto is if 28 Days Later occurred in the world of Giant Days, and as a fan of both, maybe that's why this comic appealed to me so much. It's cover art was immediately striking to me, and the watercolor looking interiors perfectly complement the splattery gore of the H3N8 virus, aka Canine Flu. Our two main characters seem to be diametric opposites, but now they're trapped together, trying to survive on a college campus under quarantine. And let me tell you, when I was in college, I didn't think about how germy probably every little thing I did was, but now, looking back on it, it's a miracle a plague really didn't break out on campus, and probably every college campus out there. I really liked this book, and I'm looking forward to the next issue. 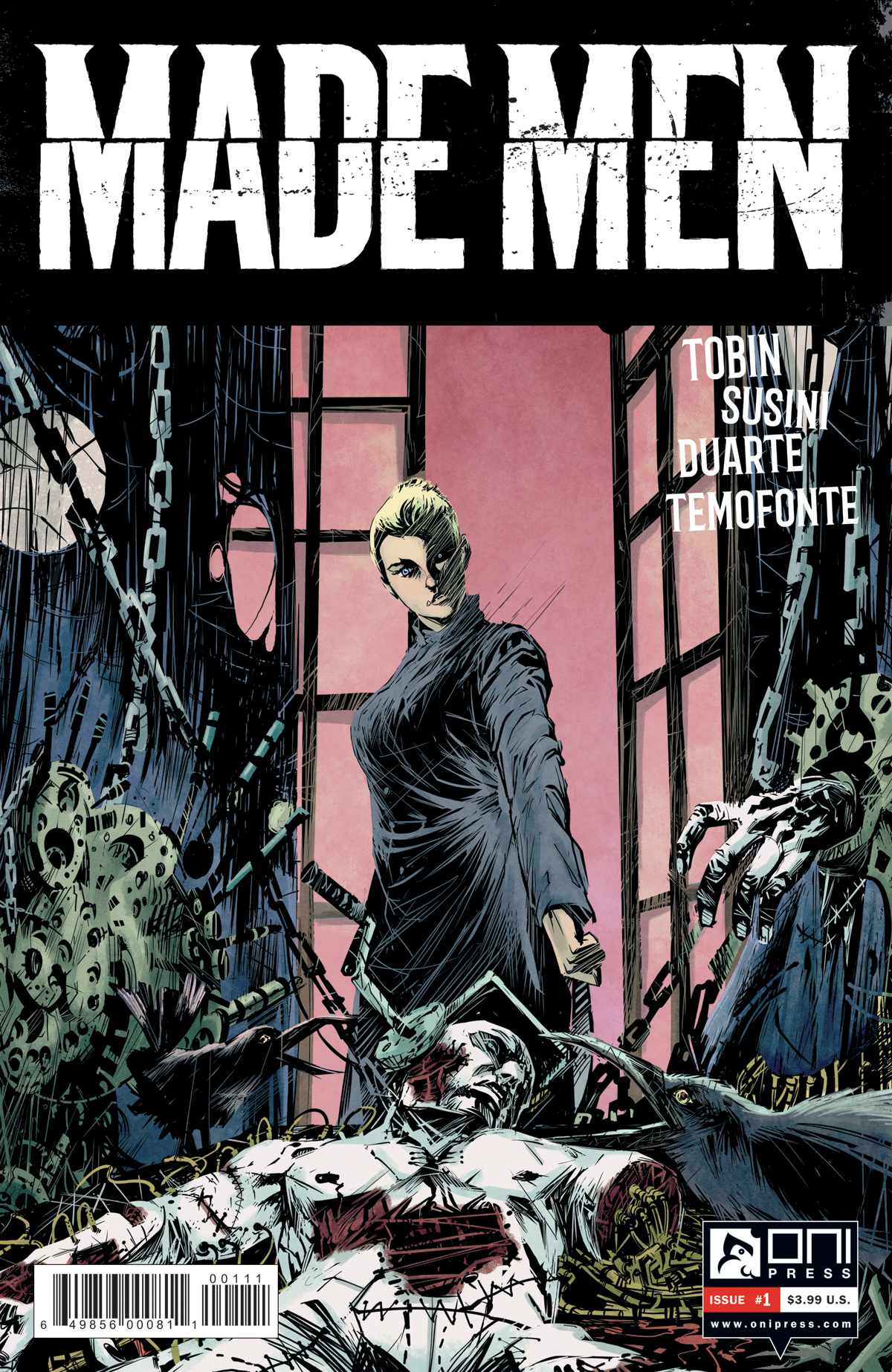 "You don't know Jutte Shelley, but you might know her family. Before she was a Shelley, she was a Frankenstein. These days, she's a Detroit Special Ops officer. At least she was, until she and her entire team were ambushed during what should have been a routine call. Jutte watched as, one by one, her friends were gunned down. And then, in a flurry of bullets, Jutte fell too. But Jutte isn't like other people. She's a Frankenstein. And she knows all her family's secrets. Guess who's getting the gang back together?"

This is the second new comic series this year that takes the Frankenstein tale and twists it around to the modern day. The other one being Victor Lavalle's Destroyer, in which the final descendant of Victor Frankenstein sees her son gunned down in a police shooting, and goes on a quest with her family's original monster to bring him back. This story is very good, and takes a thoughtful modern stance on already tense modern issues. However Made Men, while still entertaining, is missing that social commentary. That doesn't do it a disservice, necessarily, but I did happen to think about it after the issue had completed. I think it's interesting in both comics that the final Frankensteins are both women, although in this comic, they suggest that it was never Victor Frankenstein but his sister who was truly the one with a gift for science and medicine (and perhaps the occult), and our main character (whose name I cannot for the life of me figure out how to pronounce) has spent her life trying to remove herself from that name. When she decides, after seeing her whole squad die, that she is going to accept the mantle, get her friends back, and then get her revenge, I felt a little thrill of excitement -- yes! Lady Frankenstein! Lady experiments! But by the end of the issue, I felt a little let down - she gets her friends and revenge, but I just struggle to see where the story is going to go from there? I'm interested to check out the second issue, because I want this to be a good story, and strong and fun, but I feel like it might fall short. But hey, there's always Destroyer if this lets me down I suppose. 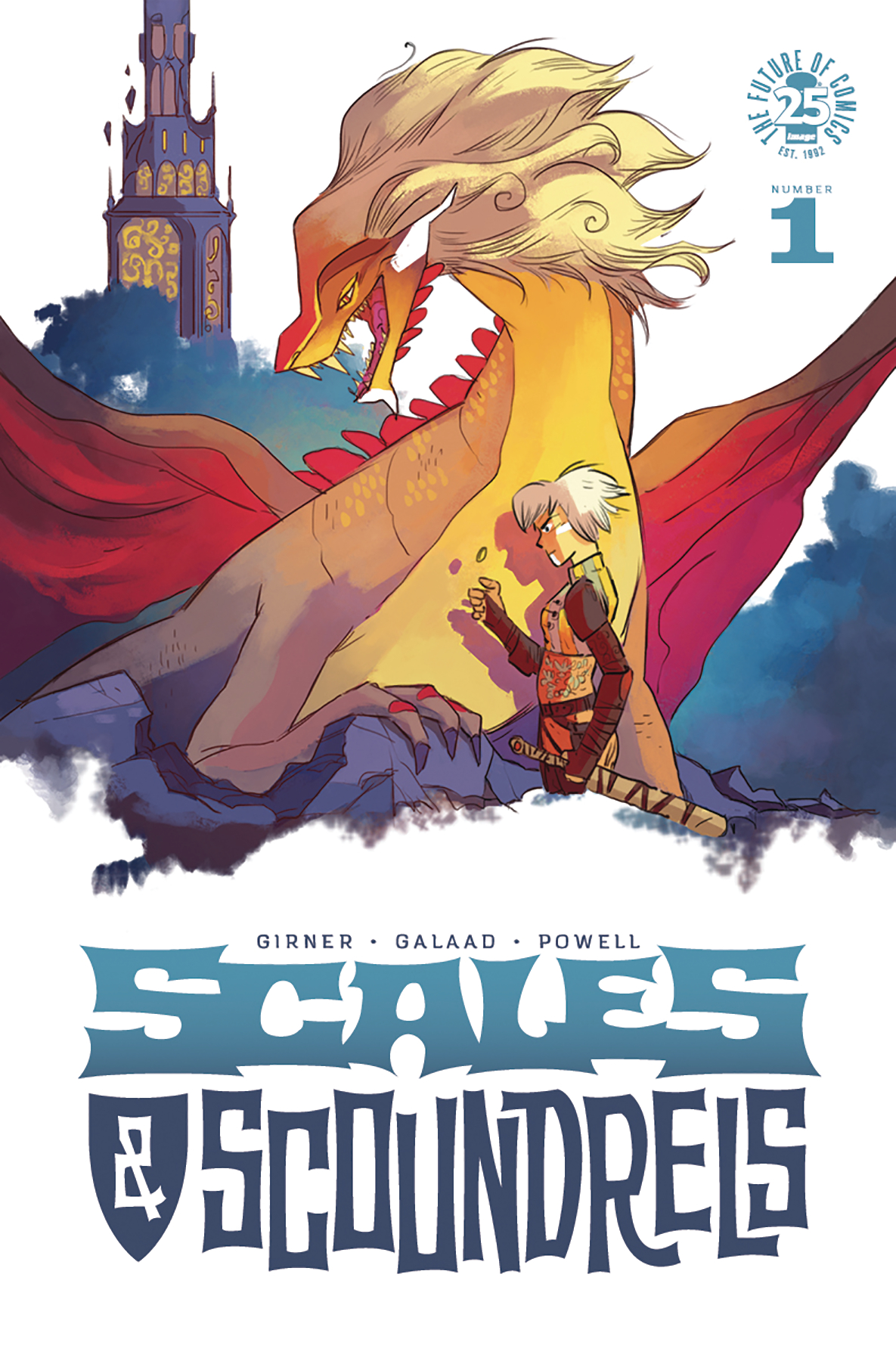 "It's hard to make an honest living in a land brimming with magic and mystery, and treasure hunter Luvander is tired of being a penniless adventurer. Ever in search of gold and glory, she sets off for a fabled dungeon, "the Dragon's Maw," an ancient labyrinth, at the bottom of which slumbers endless wealth... or certain doom! But what starts out as a road to riches becomes the first step on an epic journey to destiny, for Luvander holds a secret in her heart that will shatter the chains of fate and bring light to a world encroached upon by an ancient darkness. Writer SEBASTIAN GIRNER (SHIRTLESS BEAR-FIGHTER!) and artist GALAAD are proud to present SCALES & SCOUNDRELS, a colorful and exciting new monthly fantasy adventure from Image Comics, for scoundrels of all ages!"

This was such a pleasant read. Our hero, Luvandar, is a bit of a rogue, traveling from town to town looking for adventure and treasure, and perhaps not always by the most legal of means; but she has a good heart for those less fortunate. And also, she might be a dragon. Also also, it looks like there's a bounty on her head. But good news for her, she's just run into a traveling prince and his escort, and it seems like they might have something in common! This seems like it could shape up to be a really enjoyable fantasy story. It's light and airy, but that isn't to say that light on plot or story by any means. It feels like they set up plenty in this issue while still giving you enough to want to come back for more. I loved the art and color here, it seemed to suit the characters and settings perfectly. Our main character is likable; clever and fun to watch outsmart and out-fight those who'd cross her. I'm honestly not much of one for fantasy stories as a general rule but I really did enjoy this, and I look forward to learning more about Luvander and catching up on more of her adventures.

That's it for this week! Thanks for coming by, and we'll see you next time!