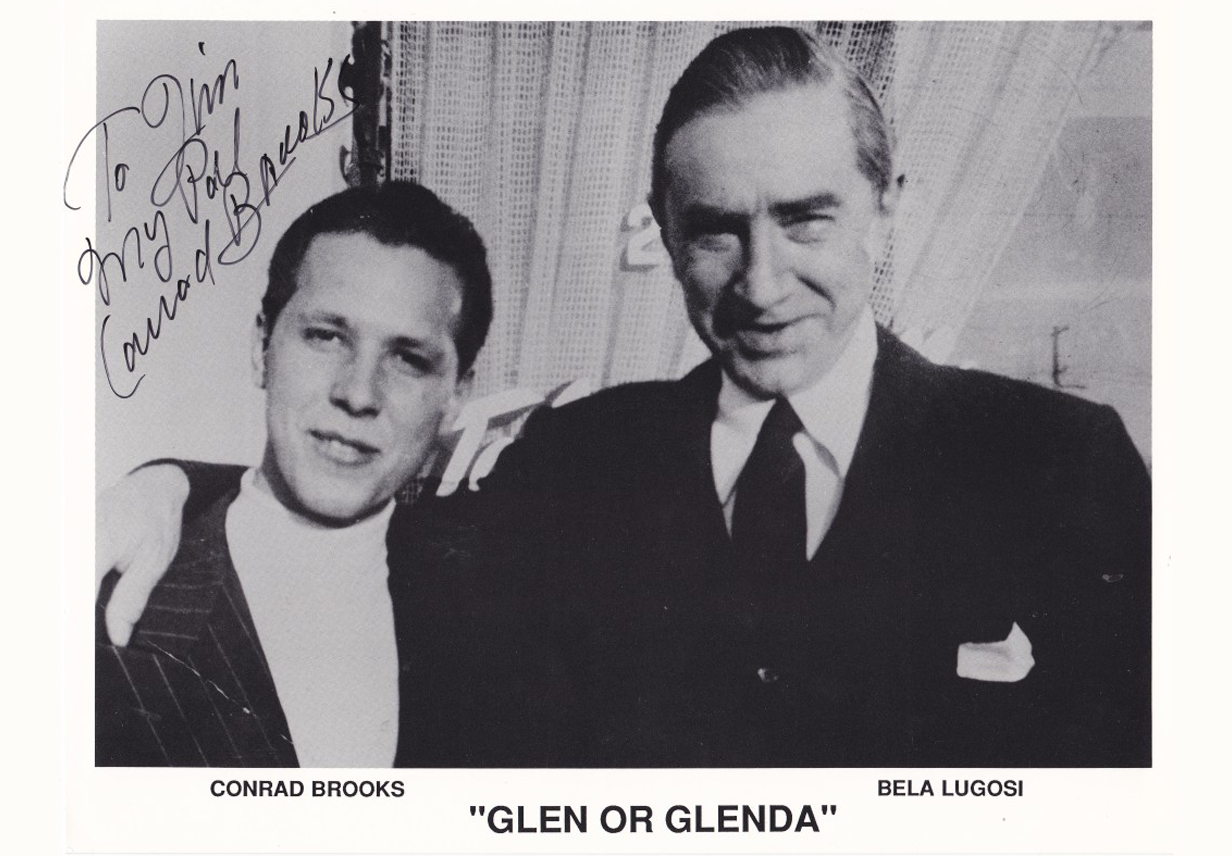 The interest in "so bad they're good" movies has taken off in recent years. Names like Tommy Wiseau are being introduced into the lexicon of Oscar fodder, playing to an audience that would have watched Tim Burton's Ed Wood two decades ago. The phenomenon isn't new, but the idea of watching bad movies for a good time is new to someone every day, and often times the story of those films and their makers are more interesting than the films themselves.

Conrad Brooks may not be a household name, and outside of genre fans and film buffs, even Ed Wood, the name he is most often attached to, is mostly relegated to, at best, passing acknowledgement. As a refresher, Ed Wood is a filmmaker best known for films such as Plan 9 From outer Space and Glen or Glenda, exploitation movies considered for some time to be a few of the worst films ever made. Brooks was a frequent collaborator with Wood, having worked on many of his early and more recognized films as cast and crew. He was the last surviving cast member from the early Wood films. The story of Brooks himself as a filmmaker, however, may both rival that of his better known counterpart and, despite it, never be fully heard.

Brooks was born in Baltimore, Maryland, a city with it's own legacy of weird cinema, and moved to LA as soon as he turned 18 to seek a future in acting. It's the filmography of Wood that gave Brooks many of his credits as a young man, taking odd rolls, and in some cases multiple in a single film, that were often uncredited. It was his role as a Police Officer in Plan 9 From Outer Space that he is best known for, netting him decades later a brief guest appearance in Tim Burton's retelling of Wood's story, Ed Wood, and a younger actor playing him in a supporting role. This was a frequent theme for Brooks in his later years, after the resurgence in popularity of early B movies in the late 80s and into the 90s that brought him into the convention scene. Along with playing along side Wood headliner Bela Lugosi, whom Brooks would defend countless times in personal conversation from the sometimes terse representation in Burton's reimagining, he would play beside actors ranging from Johnny Depp (playing his late friend Wood) to Joe Estevez in the video oddity Little Lost Sea Serpent. He had a knack for finding directors that would bring him back for future work, like Donald G Jackson, again playing odd parts in some of the filmmaker's assorted Scott Shaw vehicles, a shakey post-apocalyptic franchise culminating in the film Toad Warrior. He would also rack up many credits in young and unknown filmmakers' shoots, willing to work for a buck or occasionally simply some kind words and a ride to set (the author of this article can personally attest to this, having once brought him to work on a short film for a six pack of beer and a Subway sandwich), lending a strange credibility that can't be considered on an alphabetical scale. Brooks wasn't B or C, even even Z list. He was something unique.

His filmography is at it's strangest when he gets behind the camera. None of the films that Brooks starred in can be considered "good," with the exception of Burton's biopic of his colleague, but none reach the outright impressive degree of schlock filmmaking that Brooks was capable of on his own. Using the skills he learned from Wood, scraping together every resource while still saving a buck and somehow putting none of it on the screen, Brooks is credited with directing and producing ten films, almost all between 1996 and 2010 after the resurgence of interest in his work. Of these, there are two sets of trilogies, Jan-Gel and Gypsy Vampires, utilizing the hills of his family home in West Virginia and the stereotypes that came with them. Having watched several of these films, I can only describe them as trascendently bad, hacky in a way that is difficult to describe. I have a strong memory of a scene in which the filmmaker, playing a lead role, is running away from a monster that was clearly shot from resources borrowed from a haunted house, leaving the character to pause and shout, "start the truck, and put on that song I like," obviously his only option to insert a song he was given permission to use into the movie. And none of that is said as a negative: in a world where we have spent more than a decade trying to understand Tommy Wiseau and his film The Room, similar examination could be given to Brooks and his creations, and they're wholly enjoyable and, unlike Wiseau's history in film, honest. Brooks was happy to take a dollar in exchange for his work, but he was certainly honest about both that intention and the work itself.

Sadly, we will never get to examine those creations with the filmmaker's thoughts. Mr. Brooks passed away at the age of 86, leaving an official IMDB filmography of nearly 100 films. However, having worked with him in various capacities on several productions, I would be comfortable saying that the man has likely worked on almost twice that, films that were too small to be recognized, too obscure to reach the internet, or never made it from an editing console. A few years ago, I hoped to help him put his story out there, but his dementia created issues of confusion and professional paranoia. I don't fault him. He worked hard to create a strange legacy, and the only shame involved with not putting his own story to video was that he didn't get to tell us why and we didn't get to spend as much time with him.

In remembering my past experiences with him, friends have been recalling their stories and sharing links to projects that he was involved in. Personally, I have one film that was never finished, only existing as a rough cut and some various scenes. Conrad's outtakes perfectly exemplify his acting style in his late years. His dialogue is loose, only operating on a few key words he was given when he couldn't remember his script, something no one could fault him for at his age. He ad libs and, because of it, a scene was written for him to play a man with a failing memory. He didn't know this about his character. It's as hilarious and charming, and peculiar as working with the man as a whole.