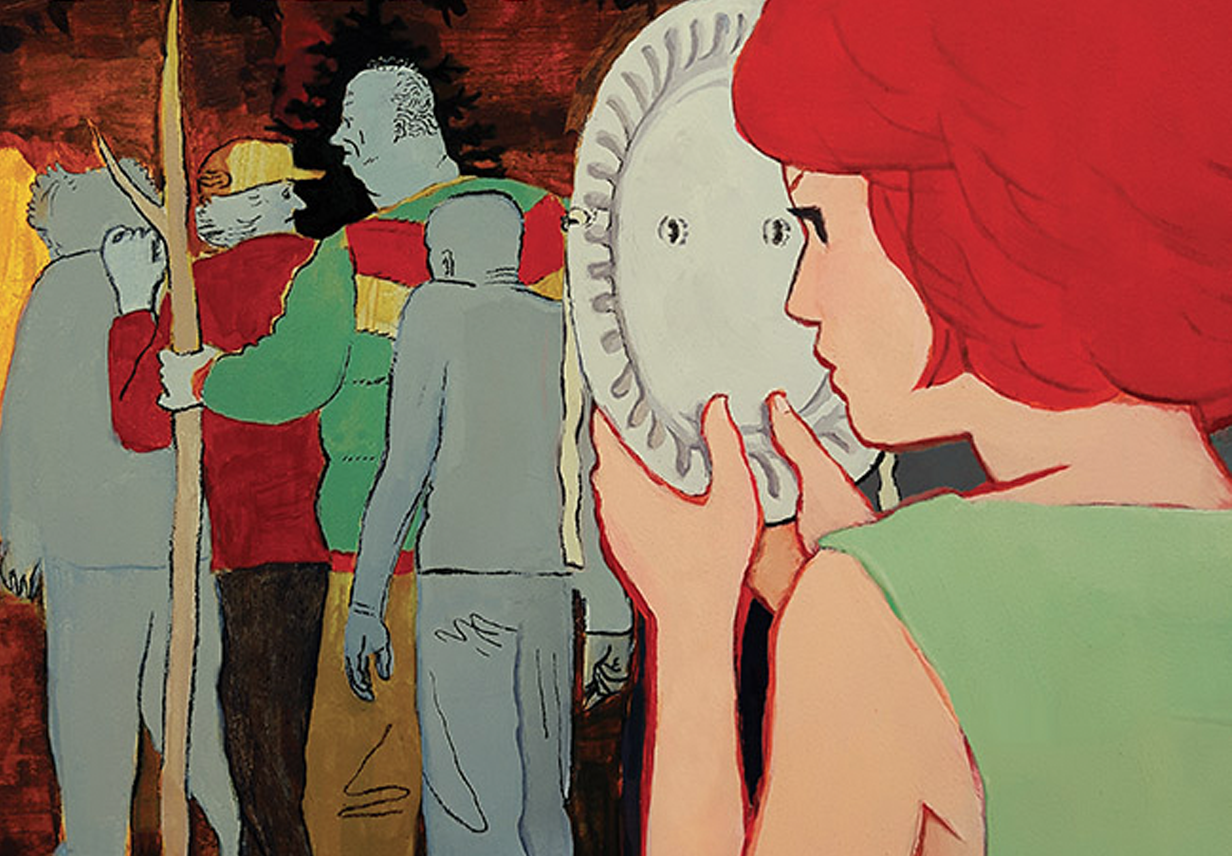 Despite its outward appearance, The Case of the Missing Men, the first book in the Hobtown Mystery Stories series, for kids it is not. The design of the cover is an homage to the vintage Nancy Drew and Hardy Boys books I checked out in the library over and over as a kid, and however much the story is written to evoke those kinds of pulp childrens' novels, The Case of the Missing Men is a much more disturbing and feverish kind of graphic novel. 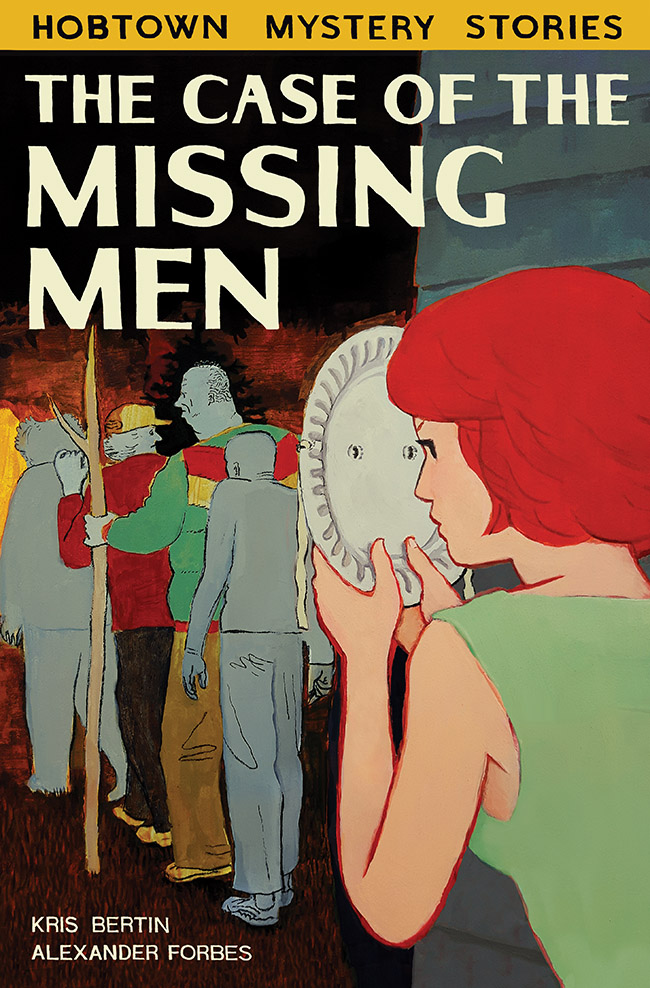 I tried looking up reviews in other places and found that most just regurgitated the information on the back of the novel, or a slight variation thereof. Mostly described as Nancy Drew meets David Lynch or Scooby Doo meets Twin Peaks, I certainly don't find that to be an inaccurate description, however I feel like there's more nuance and detail going into it than that. However, for starters, I'll include the back-cover summary as a jumping-off point.

Nancy Drew meets David Lynch in this mystery thriller set in a remote and eerie east-coast village. The story follows a gang of teens who have made it their business to investigate every one of their town's bizarre occurrences as The Teen Detective Club (a registered afterschool program). Their small world of missing pets and shed fires is turned upside down when a real-life kid adventurer and globetrotter Sam Finch comes to town and enlists them in their first real case - the search for his missing father. In doing so, they stumble upon a terrifying world of rural secret societies, weird-but-true folk mythology, subterranean lairs, and an occultist who can turn men into dogs. The Case of The Missing Men is at turns funny, intriguing, eerie and endearing, a dystopian homage to children's pulp classics.

Each of the main characters -- Dana, Pauline, Denny, Brennan and Sam, the members of the Teen Detective Club -- is in some form or another a reference to a character from a well known children's book. For example, Dana Nance is clearly an homage to Nancy Drew, from her name to her attorney father. Brothers Denny and Brennan seem to be a nod to Frank and Joe Hardy, although the subtlties of their characters were perhaps lost on me; I didn't gravitate to Hardy Boys books as much as Nancy Drew when I was a kid. Aforementioned globetrotter Sam Finch undergoes the character evolution from bad-boy type to intelligent kid genius, almost from noir detective Sam Spade to Encyclopedia Brown. Seeing these characters in a setting that's dangerous and downright weird, and watching how they react and develop, is one of the strongest parts of this book. Watching Sam's transformation throughout the book, and the dynamic between Dana and Pauline are particularly compelling. Pauline was my favorite character, actually. While I'm not sure if she's meant to reference a particular character or just an archetype, she is the member most connected to something weird, with her dreams and visions, and precognitions. She's always drawn with big dreamy eyes, that seem to see something beyond the page. 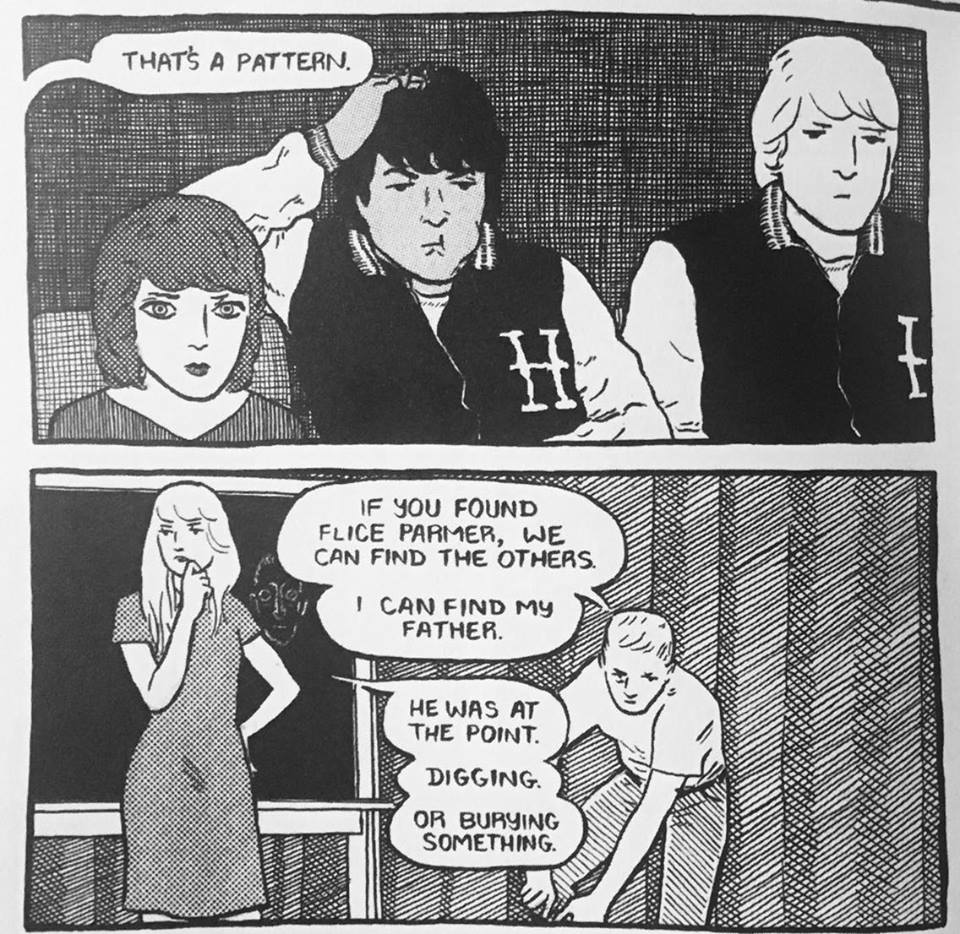 The art is very picturesque, evoking the grey mornings and ocean air of Hobtown. The opening and closing scenes of the book are especially good examples of this, which take on added connotation and meaning after reading the events in the intervening pages. My favorite part, and a really cinematic moment, was a body discovery roughly a third of the way into the book. It's dramatic and creepy, building suspense and then leaving you on a cliffhanger as you turn the page to an single panel, opposite a black chapter title. It's a deliciously unnerving moment, and it's one of many that made me really love this book. 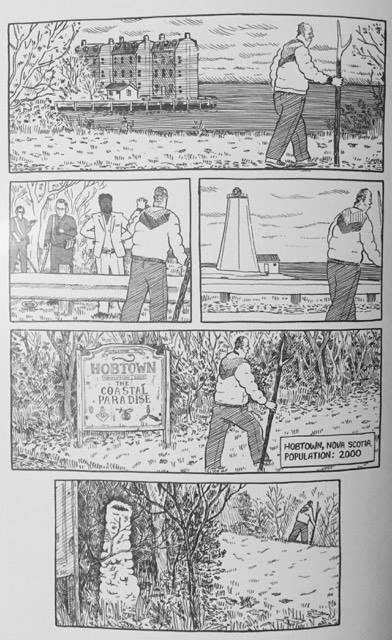 The art is strong, and perfect for this kind of story. Everything is black and white, with different shades and textures provided by crosshatching and other kinds of linear shading. The characters are all easily distinguishable and have their own look that carries their personality well. Where things get interesting is in the way adults, particulary the ordinary citizens of Hobtown, are drawn. They all look a little off, a little grotesque. Heads too big, faces too lined, mouths puckered or wide; suggesting that sort of inbred small-town stereotype, which adds to the strange insulated feel, almost in a Lovecraftian way. Contrast this to the gorgeous settings and landscapes thrown in here and there, and the book runs a real gamut of visual eyecandy.

The storytelling sometimes jumps in time, leaving the reader whirling to put together the clues, but will then fill them back in a way that really feels like puzzle pieces falling into place. The story itself is dreamlike, as it flows from moment to moment. It incorporates so many elements that make for good mysteries: secret societies, serial killers, brainwashing, animal masks, creepy towns that seem to know more than they let on, and something a touch supernatural, in this case, a creature of some sort possibly tied in to Native lore. Several mentions are made to the Micmac tribe, which is a real tribe located in Quebec and Novia Scotia, extending into the Northeast part of Maine. If you're like me, the first time you may have heard of said tribe was in a Stephen King novel, as he has referenced them in books like Pet Sematary. While it's unlikely the creators were specifically alluding to anything Stephen King, the pop culture connotations that carry with the name did ring a bell for this reader, and added a little bit of creepiness. 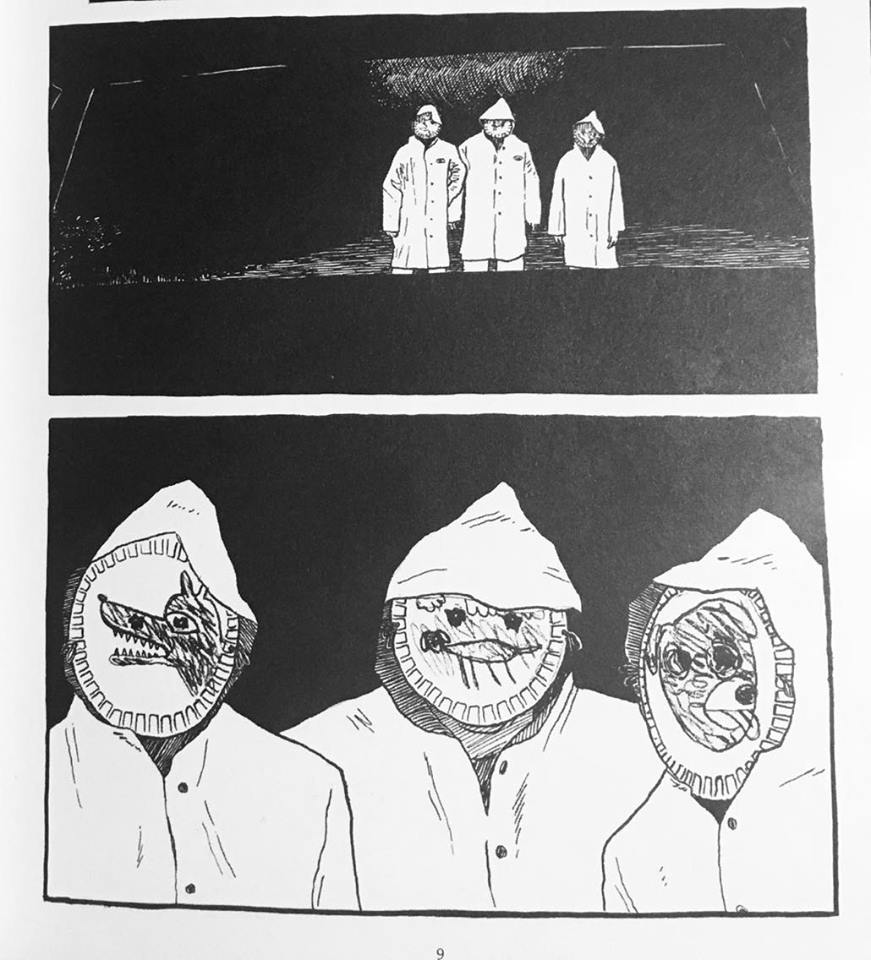 Overall, as someone who grew up collecting every Nancy Drew book they could get their hands on, and grew into a woman with a taste for the very weird, this book was a hit. It checked off all the nostalgia cues, while blending a surreal kind of weirdness into a straightforward Mystery Teens plot. I am looking forward to future books in the series and following up with these characters, seeing where the next adventure takes them, and watching their continued growth. Grab your magnifying glasses and enter Hobtown, population 2000-something. Your provisional membership to The Teen Detective Club is pending.

You can check out the book on the publisher's website, or ask for it at your local comic shop (or local bookstore!)