Everyone in the convention community has heard stories about harassment and assault of cosplayers, often female, at the hands of attendees. While it would be essentially impossible to know where a phrase consisting of four simple words first was used, New York Comic Con addressed the issue in 2013 with a simple standing sign placed throughout the event: "Cosplay Is Not Consent." The idea is simple, reinforcing that someone's attire doesn't dictate how they wish or deserve to be treated. In the context, an outfit, revealing or not, modeled after a fictional character, regardless of the character's percieved or imagined orientation, preferences, or other attributes, does not give permission to others to act in a manner that would otherwise be considered unacceptable. Despite how simple the concept is, it's a discussion that continues to this day, in particular because of the cultural expectations of nerd-oriented events to draw an audience that may have more finite social skills. It has been written about by countless media sites from cosplay-specific bloggers even earlier than NYCC's standing signs and has since been addressed by countless pop culture sites ranging from Gawker, Jezebel, Vice, and endless other outlets. Regardless of your opinion of any of those publications, you can likely find one that you generally agree with that has discussed the issue in simple terms as early as or before 2011. 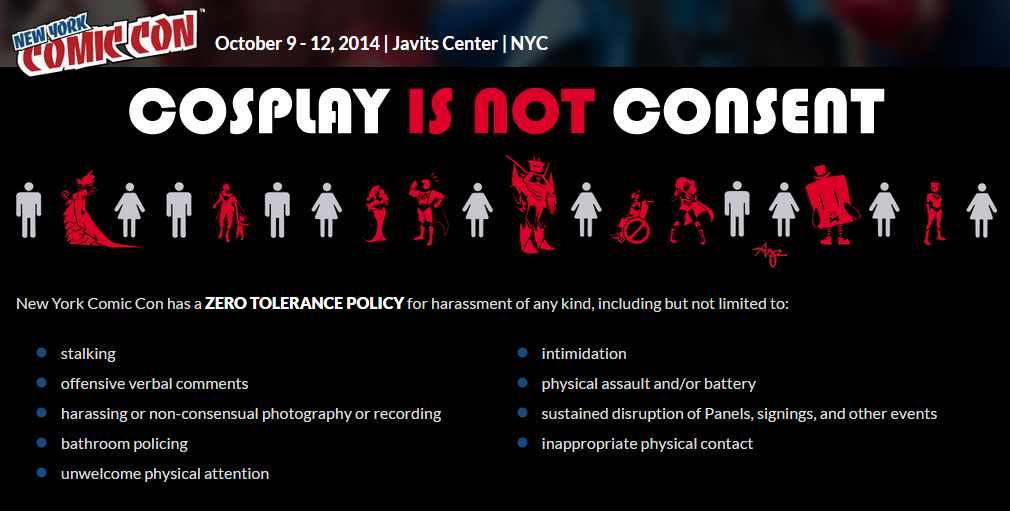 In other words, it's not a new idea, much as it isn't a recent issue. Harassment happens essentially everywhere, and putting socially limited people in a space where they feel comfortable being themselves around other people dressed as characters they had childhood crushes on, or continue to, is only remixing a cultural issue that is well known and well documented.

Cosplay Deviants is a site running on the model created by Suicide Girls: collect young women of a particular appearance and hobby and get them to do your work for you. Use their image for both your product and promotion. It's a reasonable reaction to a consumer demand for adult media using existing properties. In 2014, Vice wrote an article about the phrase "Cosplay Is Not Consent" where they spoke to one of the site's models, mentioning that the site had hosted a panel at a convention using the phrase as a name. That's fine. Chances are, these women who sell their appearance as a product focusing on cosplay audiences have a strong knowledge of the subject of harassment and objectification. 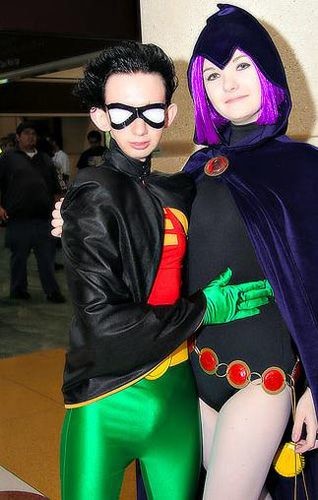 [Out of spite, here is a photo of Troy Doerner, the founder of Cosplay Deviants, we can only assume the moment he realized how profitable selling the images and work of others would be.]

However, in 2016, the site registered for a trademark on the phrase, and later in the year were approved. 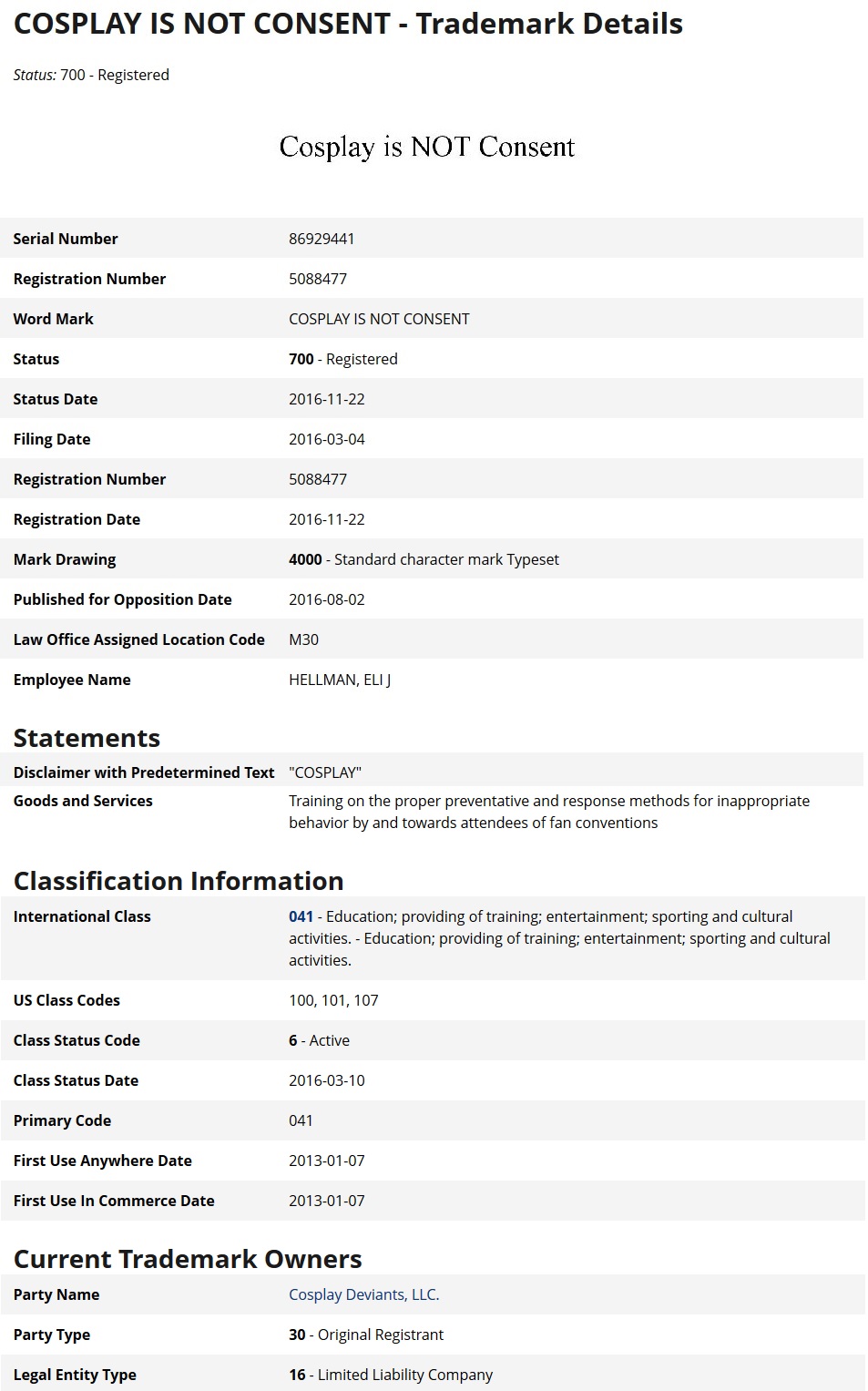 There is no issue with profiting from cosplay, no matter the avenue. That market exists and someone will profit from it. There is no issue with profiting from current events or even activism. Someone will always be making money off of the real world difficulty of others. The issue starts when someone seeks to privatize that activism and control the use of it's application. There is no benefit to trademarking something unless the intent is to keep it's application limited to the profit of those maintaining it.

Cosplay Deviant's legality is questionable at best; their entire product base is built on intellectual property of others that they have no contributed to or had legal use of. This discussion has been driven home dozens of times as Lucasfilm, and now Disney, issue cease and desists to keep costumers from selling products that violate their rights as an intellectual property holder. To then take a phrase that not only existed years before their application, it's existence being the only reason they chose to use it at all, and claim it as their own is without question morally void and flawed on a legal ground. That phrase being the outcry of frustrated, harassed, and often physically assaulted women makes it unacceptable, to keep my verbage above four letter words.

It has been reported that the LLC is requesting that conventions ask for permission to use the phrase on banners and in panels. That would be fine if it weren't for the further report in which they are asking for free advertising in exchange for permission. Exploiting victims for profit isn't ok. I have reached out to a few people who made this claim but as of this article's posting have not got a reply. The company denies these accusations, stating they have not asked for any money in exchange for the use of the phrase at conventions. However, the primary claim is that they are asking for advertising, not cash.

Since the accusations, the company has gone on damage control, releasing a press release that says very little of the issue and essentially states they were offered to buy the domain name in 2016 which seemed predatory to them, the trademark was filed to keep it away from less scrupulous businesses, and that they have spearheaded the movement since 2013. Uh huh. The majority of the brief statement is geared to convince anyone reading that they have any right to control the use of a common phrase in the community that had existed prior to their use and purchase of a domain name. It ends with:

A form message sent to conventions who have previously used the phrase has been sent to organizers. It states:

"To be clear: we have no intention of stopping your usage of the phrase, or your promotion of Cosplay is NOT Consent. We would, however, like to advertise your show’s compliance in helping to provide a safe environment for cosplayers and attendees alike through our combined social media, newsletter and educational panels.

Please contact me via email (troy@cosplaydeviants.com) or via phone (321.385.7465) so that I can send your convention an acceptable trademark use form.

If you plan on continued use of the Cosplay is NOT Consent trademark please sign and return the attached form at your earliest convenience."

The company goes on to claim that their primary goal is to keep other companies from producing merchandise with the phrase on it, and that all products they have produced with the phrase were given for free.

If the accusation of trading use for advertising is valid, the business seeks to force conventions to advertise an adult company that profits from intellectual properties they do not own in a space that is otherwise family friendly and all ages in order to use a common phrase that has existed in the community for years prior to the company's similar usage. It also raises the question of whether the company initially intended to use the domain name they purchased in 2013 for profit prior to this restructure of use.

In other words, it seems questionable.