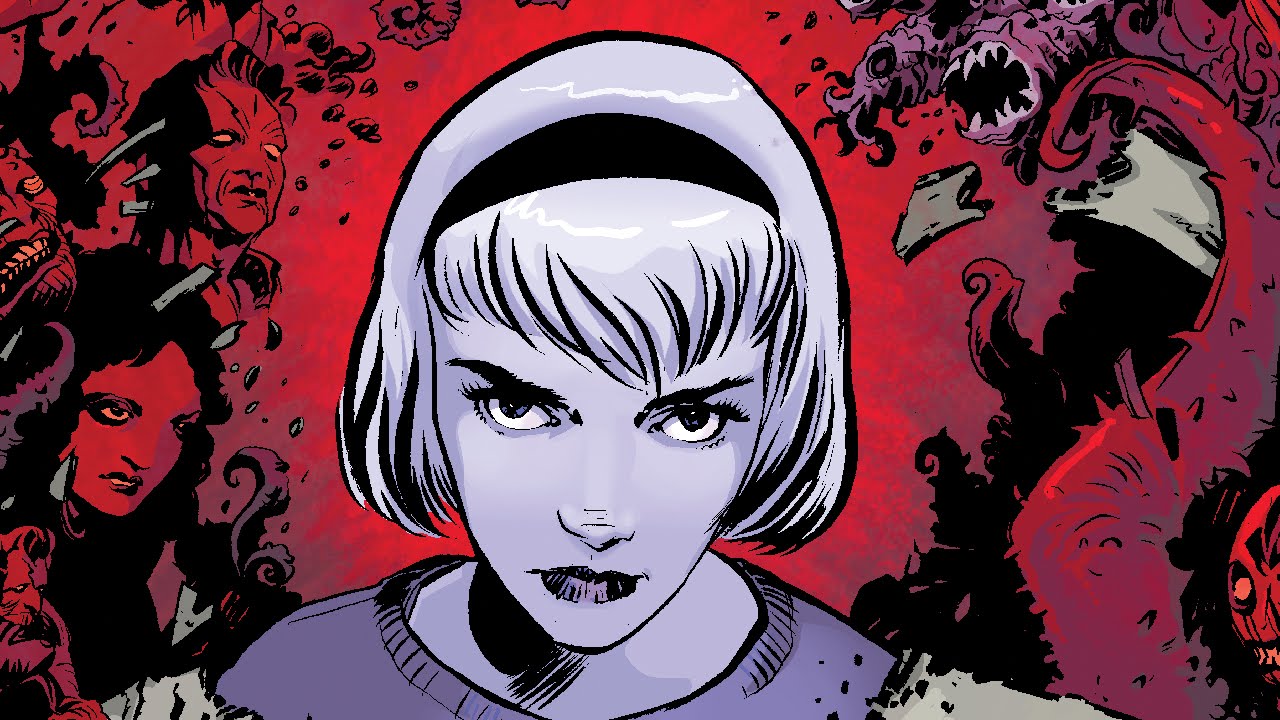 In anticipation of the upcoming return of one of my favorite comics coming out right now, I wanted to revisit my old review of Chilling Adventures of Sabrina! What follows was originally published in August of 2016, and Sabrina returns with issue #7 on July 5, 2017!

I was never much one for Archie comics. Maybe because they were some of the only comics fare my parents, concerned with keeping me "ladylike", allowed me to read (sorry about how that turned out, mom...). I remember my older cousin, Howie, had baskets of old, worn Archie comics from who knows how long ago, stashed away in his closet.  I always leafed through the pulpy pages that I'd read time and again, without much interest. Nothing personal against Archie or Jughead, I just didn't get it at that age, I guess. And besides, I could hear Howie calling from another room that Teenage Mutant Ninja Turtles was about to start, so there were more important things on my mind. I gotta admit though, I never once read a Sabrina comic. Maybe because that was something too girly for my cousin to have in his collection, and therefore I was never able to get my hands on it, or perhaps it was and I just never found it myself. Still, my first experience with Sabrina Spellman was the the TV sitcom Sabrina the Teenage Witch

This was during the heyday of ABC's TGIF block -- I know you remember Full House, Sister Sister, Hangin' With Mr. Cooper and the introduction of my favorite: the 13 Nights of Halloween. One of my favorite shows at the time was, of course, Sabrina the Teenage Witch. Magic! Comedy! Talking Cats! The Sabrina and Harvey will-they-or-won't-they drama! It was right up there with Two of a Kind (I had the same Mary-Kate and Ashley obsession as every other girl in my 3rd/4th grade class).

It was a cute show, and I went through a period recently where I binge-watched a lot of it on Hulu for nostalgia's sake. The first few seasons were full of the warm fuzzies for me, but as it went on, it's like I could practically see the ratings drop and its inevitable cancellation manifesting before my eyes, and I lost interest. Maybe it's better to keep those precious memories safe and just stick with the first couple of seasons...but I digress.

Sabrina the Teenage Witch the tv show was pretty similar in tone to the old Archie comics: light, emphasis on humor and with a moral at the end. Pretty wholesome all around (although, again, due to my parents' mortal terror of witchcraft in their house, [sorry about that too, mom and dad...] they wouldn't let me actually get the Sabrina the Teenage Witch books, especially the "handbook", when it came to my local book fair. I had to make do with what was at the library.) 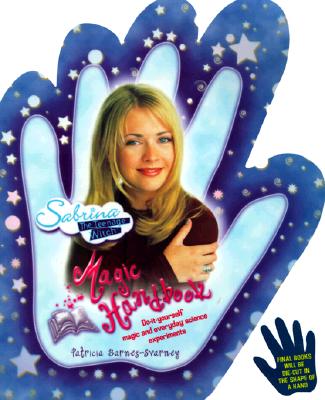 _Seriously, how was I supposed to resist this? IT IS SHAPED LIKE A HAND_

Now, to get to the point of this post. Under the skillful pen of Roberto Aguirre-Sacasa, and with the artistic vision of Robert Hack, Sabrina has gone from being the pop-princess of witchcraft to something much darker, more primal, and even at times cinematic. I'm here today to talk about the first trade paperback of Chilling Adventures of Sabrina, which collects issues #1-5, covering the first story arc of the series, called, appropriately, "The Crucible" (which is also the name of a season 1 episode of the tv show, the more you know! insert rainbow here)

Aguirre-Sacasa wrote Afterlife with Archie back in 2013, with illustrations by Francesco Francavilla. Afterlife with Archie was a zombie tale, more focused on Archie, Jughead, and the rest, with Sabrina playing a minor, albeit vital, role. Then, two years later in 2015, Sabrina's solo series took off. 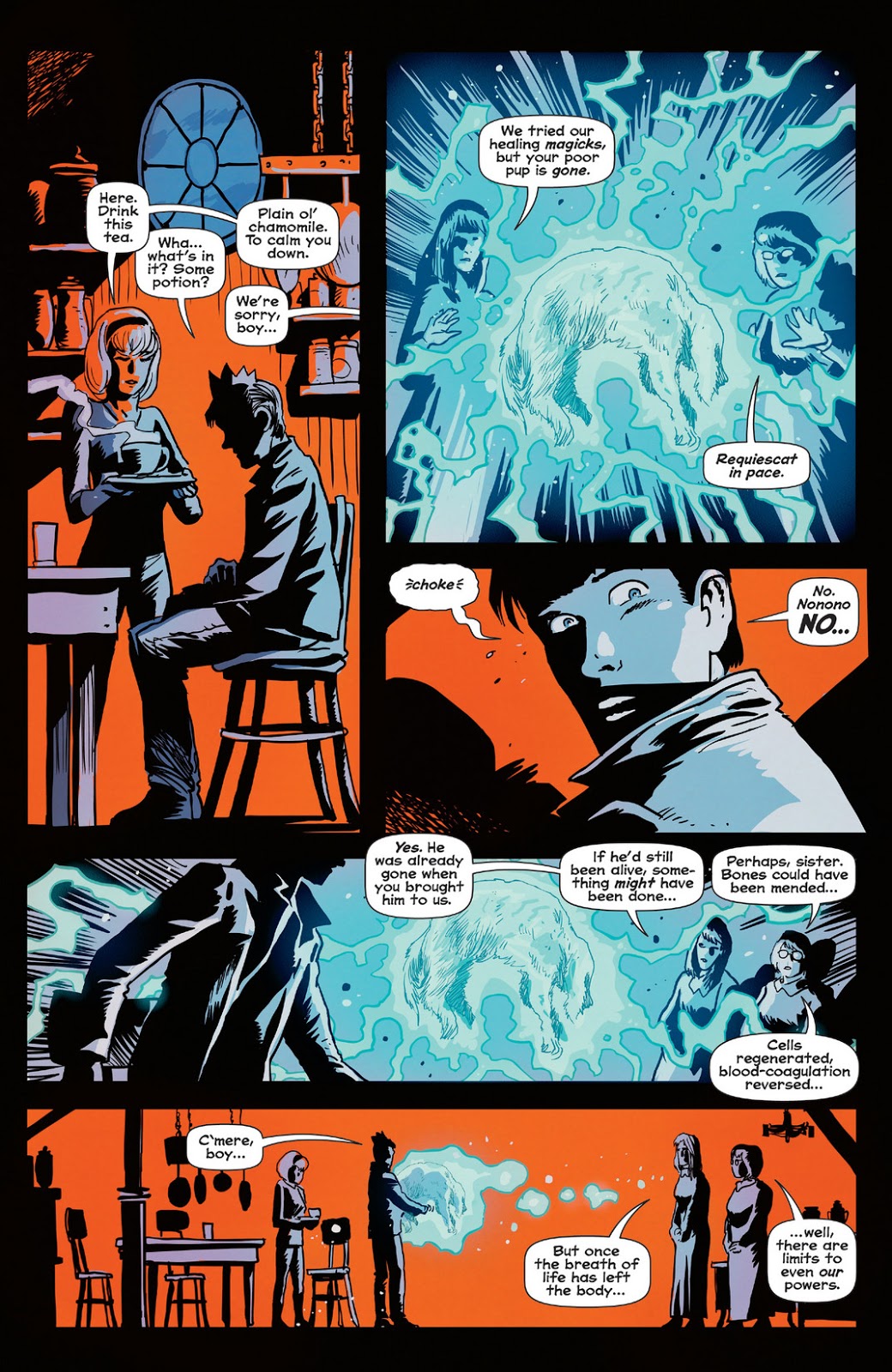 _Sabrina and Jughead in "Afterlife with Archie", 2013_

"Chilling Adventures" is a period piece, taking place mostly in the 1960s, which is perfect, tonally, for the story they are telling. Aguirre-Sacasa has said that the was inspired by films of that time involving Satanism and the occult. Appropriate, too, as the 60s are when the original Sabrina comics started appearing. In the introduction to the trade (short for "trade paperback") he states that this book's vibe is like "Rosemary's Baby, The Exorcist, The Omen and The Crucible",  hence the volume's subtitle. That respect for classic horror films is evident throughout the book, not just in the story, but in the art by Robert Hack. I was shocked to learn that "Sabrina" was his first time doing interiors for comics and on top of that, his first time doing coloring work on anything other than single images. His art is a perfect fit for the vintage horror vibe, with almost every page looking like something from a retro film poster.

Speaking of retro film posters, I love that this series has so many gorgeous covers, both variant and standard, paying homage to horror pulp comics and novels, as well as beloved films in the genre. 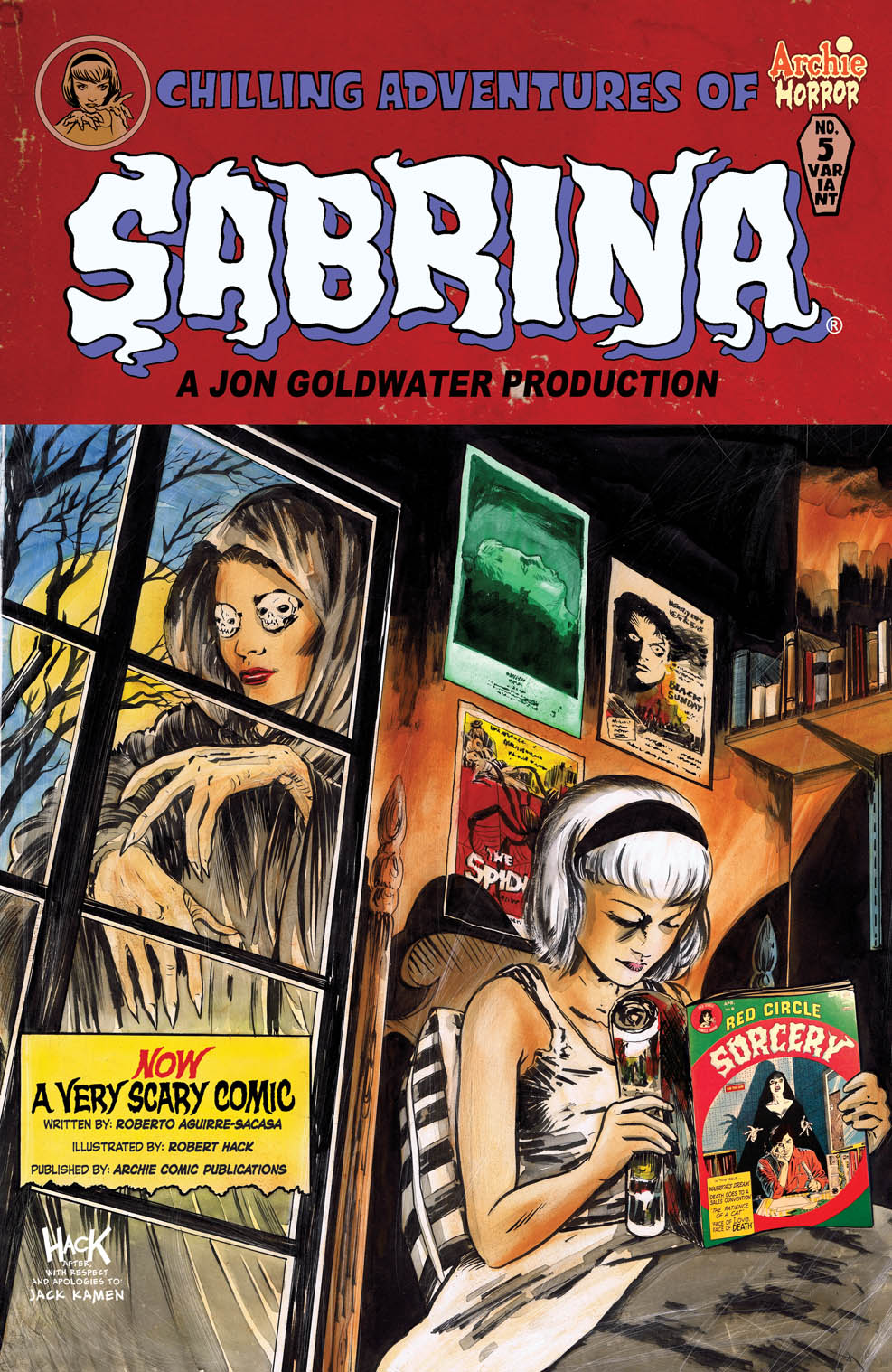 _Sabrina in the style of Creepshow_ 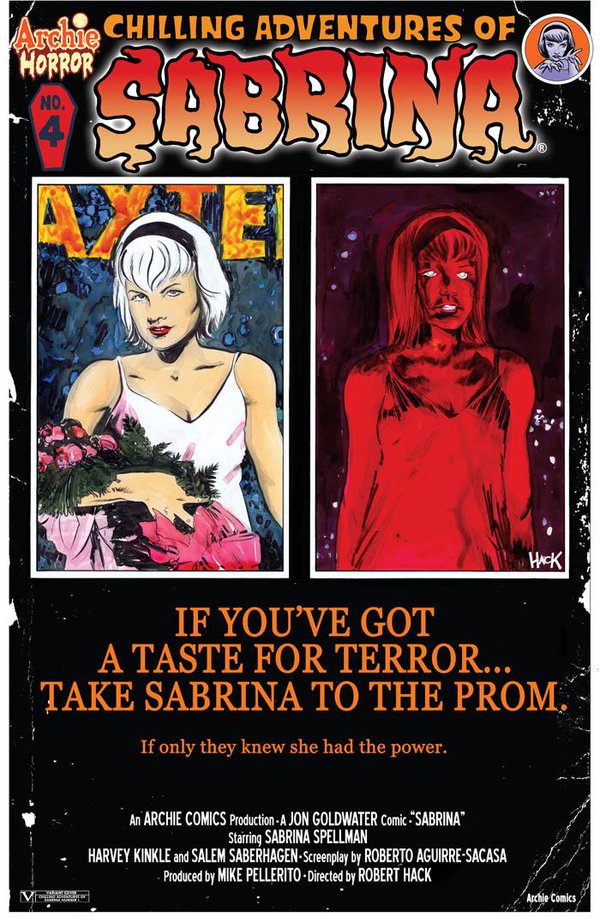 _Sabrina in the style of Carrie_

In terms of content, the story is definitely a coming-of-age tale, but steeped in the macabre. It begins with the familiar main points of Sabrina's origin: Mortal mother, Witch father, neither present; raised by her aunts Hilda and Zelda with talking cat and familiar, Salem, and  pining after mortal Harvey Kinkle. But many of the similarities end there. Here's the first five pages, just to give you a taste: 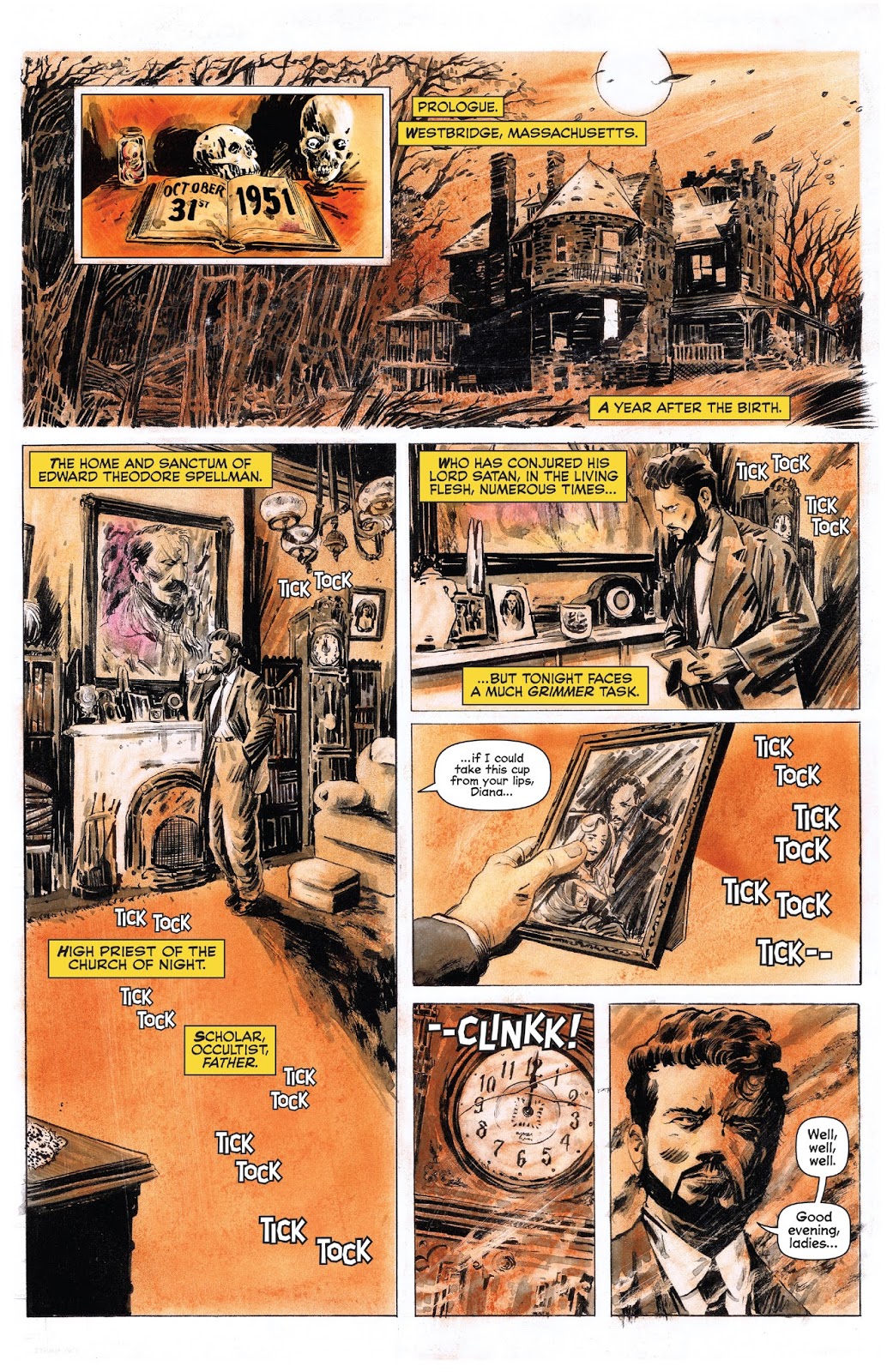 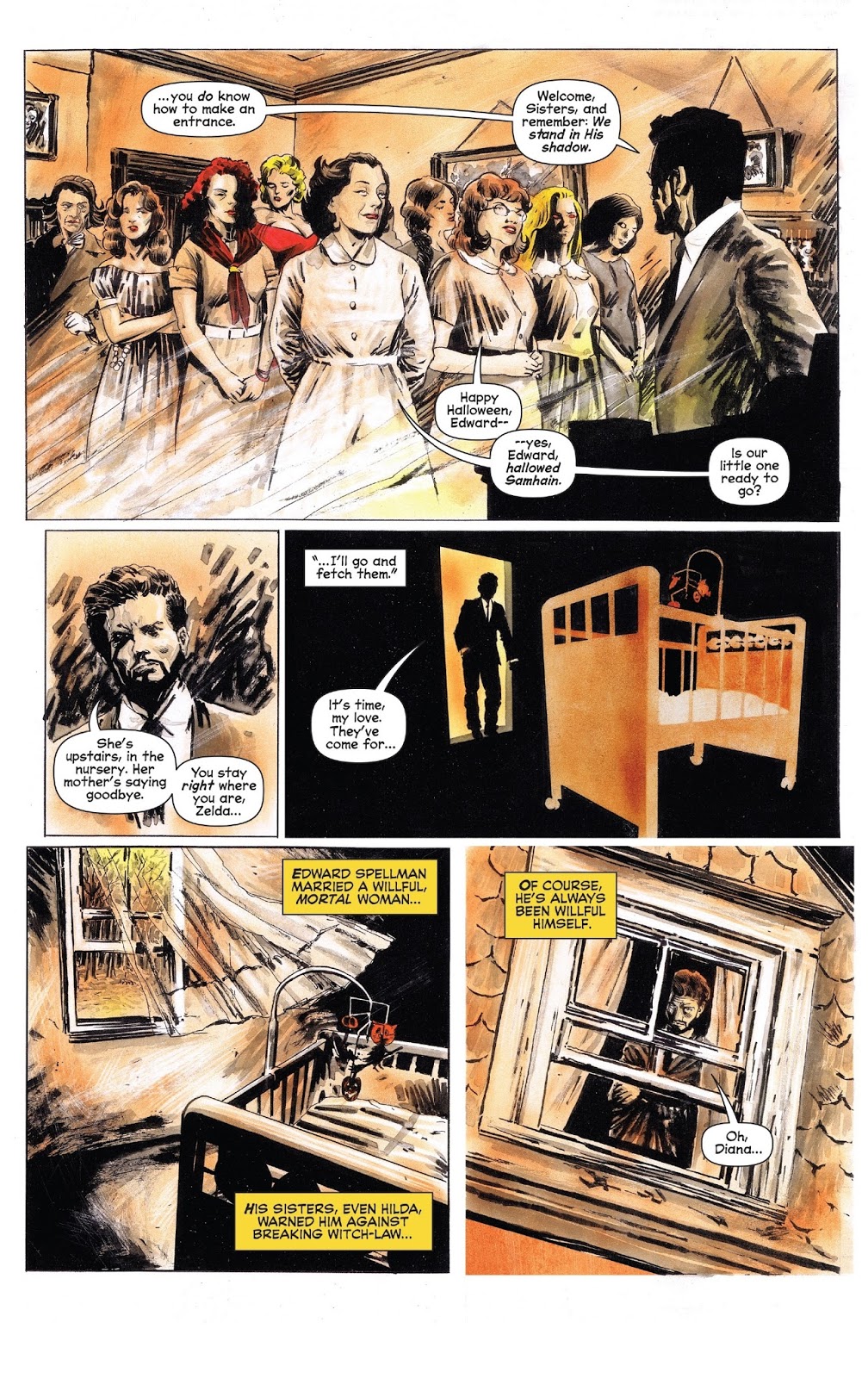 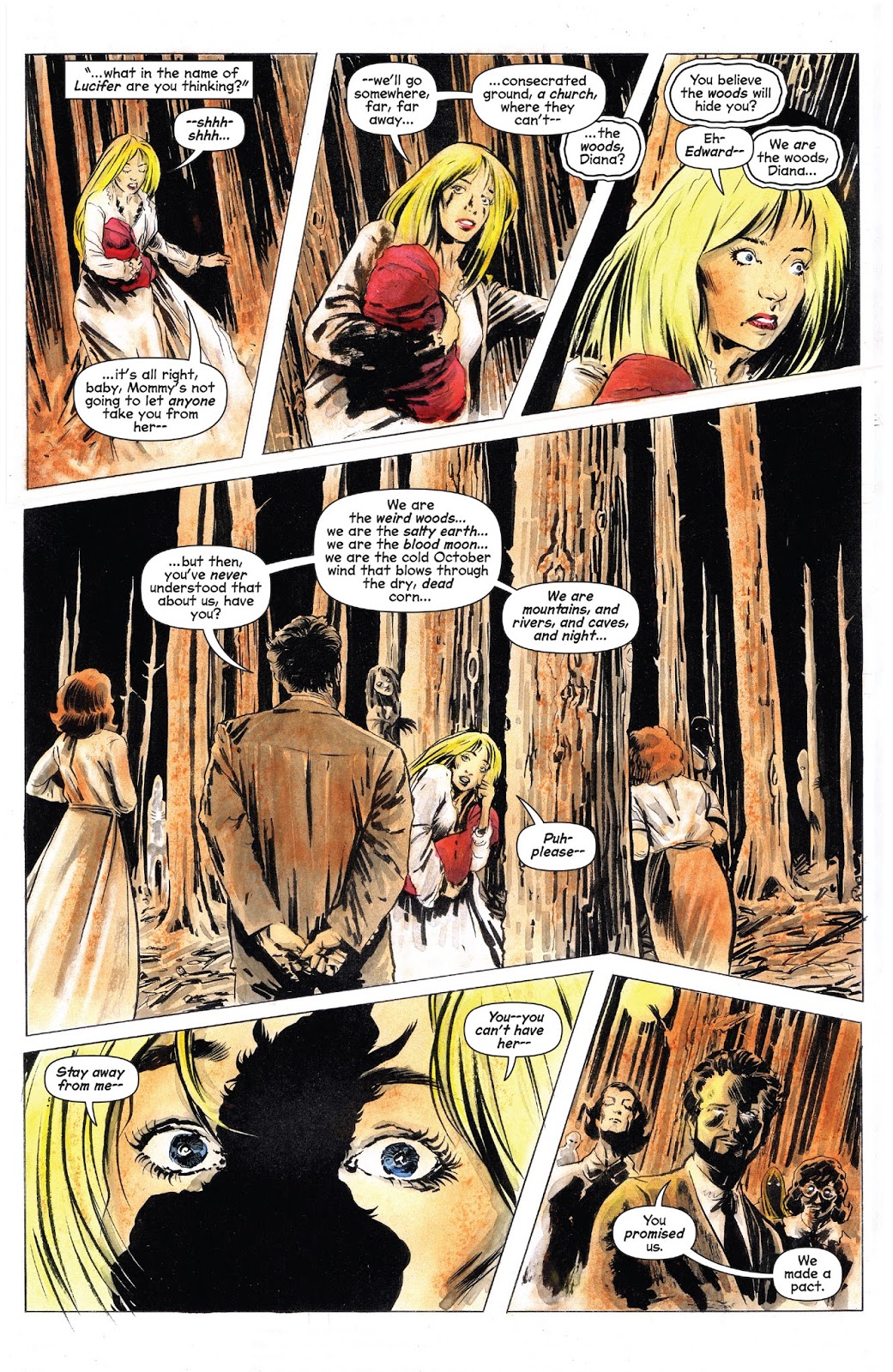 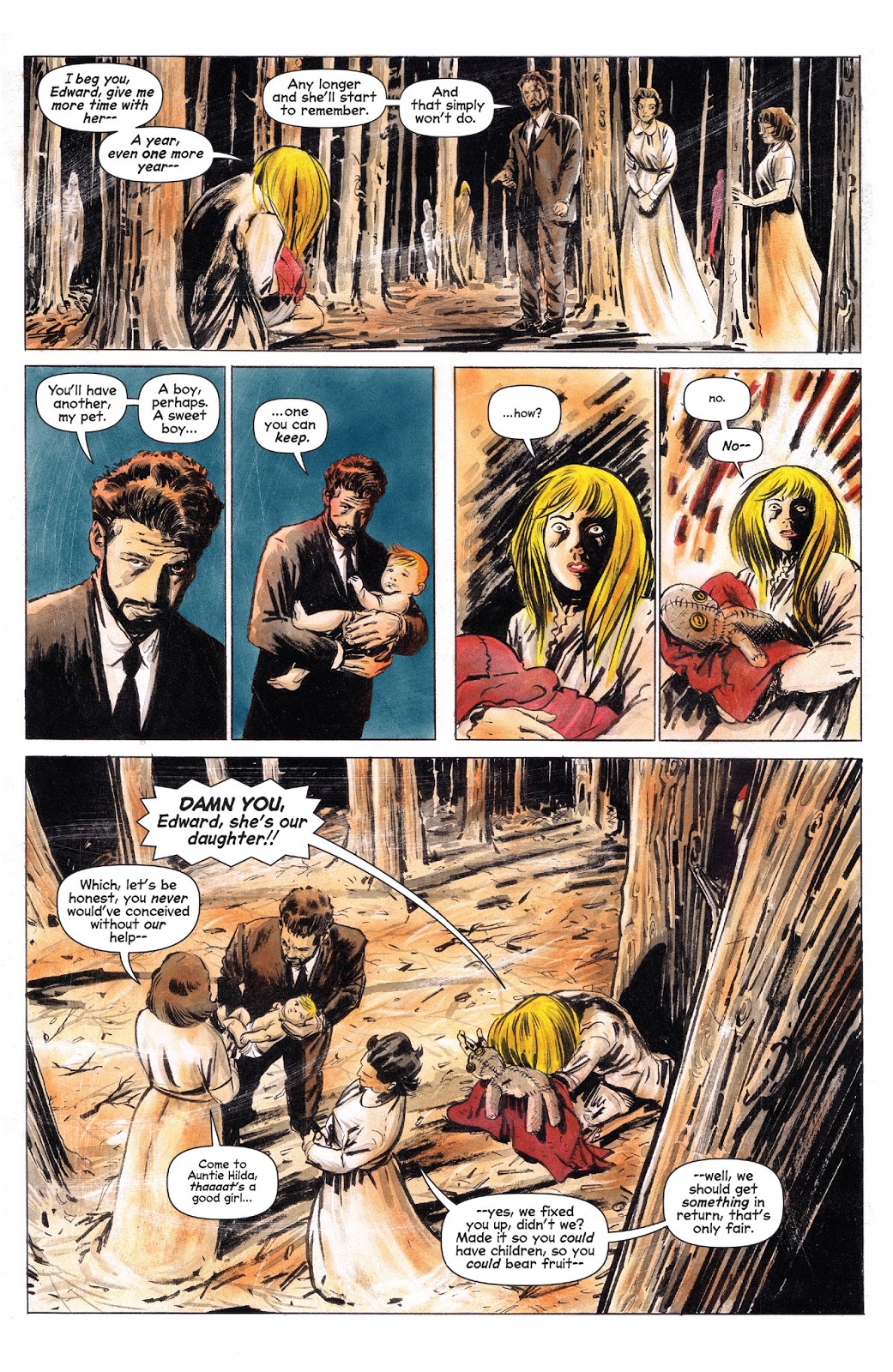 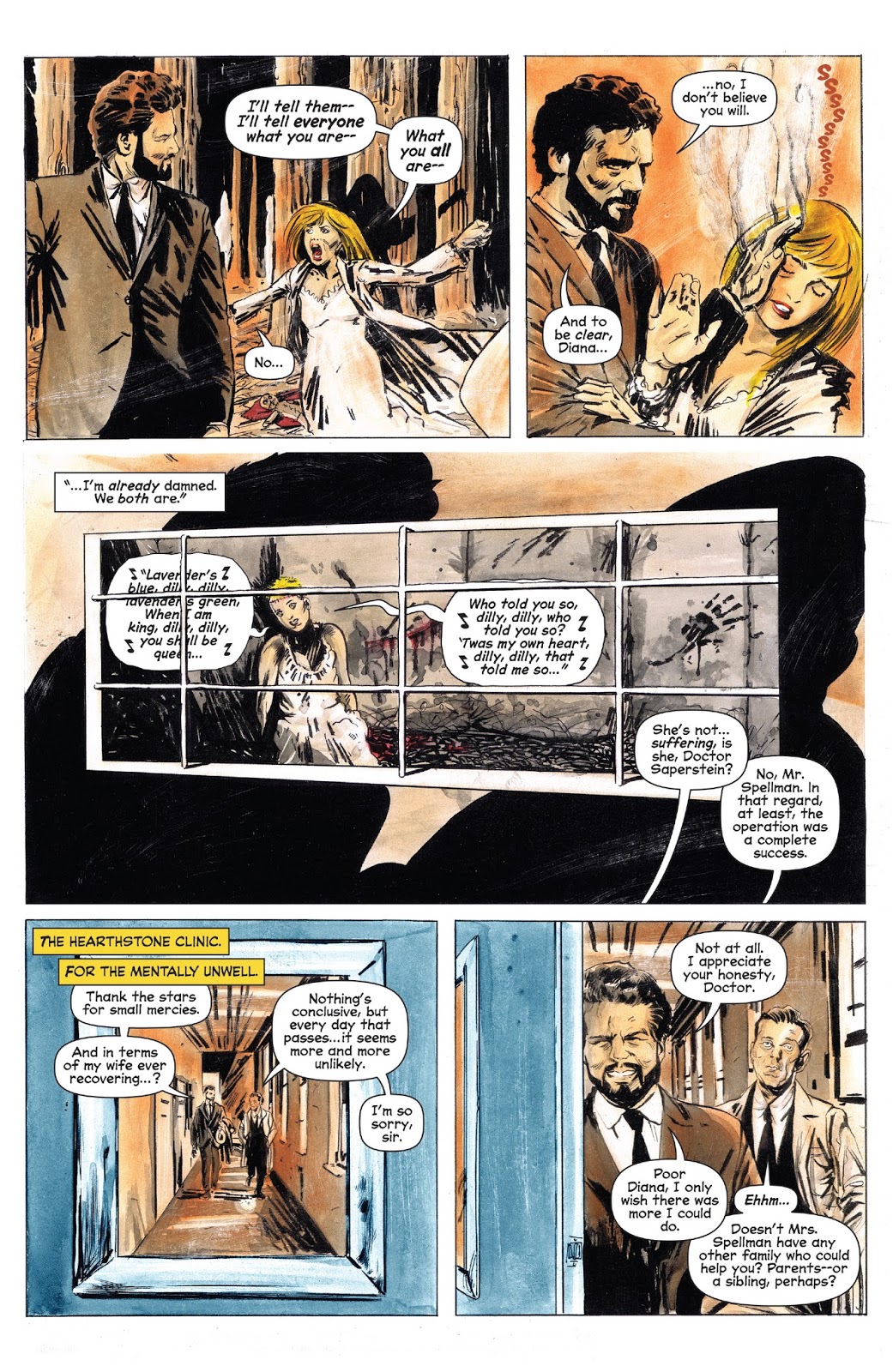 We see Sabrina getting older, we see her being raised by Hilda and Zelda, the first time she meets Salem, the introduction of her cousin Ambrose and his snake familiars from "The Old Country", and of course, the growing of Sabrina's powers. She switches from a private witch academy in Westbridge, to public school in Greendale, where the Spellmans move into a mortuary next to a graveyard, which, according to Hilda and Zelda, means they can have an endless supply of food (apparently they fillet the sweatmeats of corpses -- surprise! Cannibalism!) Sabrina meets Harvey, performs a sweetening spell to attempt to "sweeten" him to her, and we see a wonderful cameo of Betty and Veronica as witches from Riverdale, who accidentally summon something horrific from the woods in a ritual gone wrong....and this is literally all just in the first issue.

I'm not sure any summary I give can do this comic justice, the way it masterfully reworks such a family-friendly franchise into something so dark, sinister, and completely intoxicating through both storytelling and art. Everything is genuinely creepy, and way more gory than I expected going into the series, and I'm ok with that. 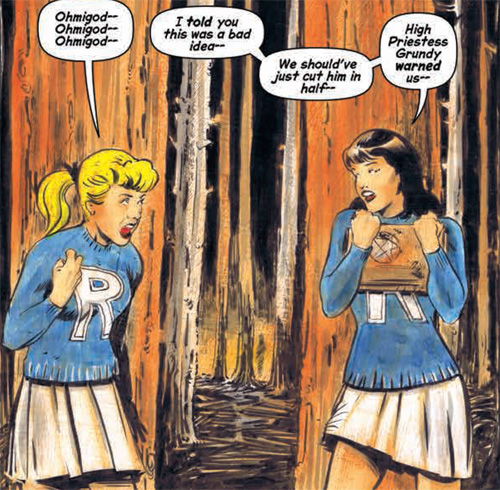 Aguirre-Sacasa also does a great job at expanding the world of Sabrina in subtle ways; the Betty and Veronica cameo mentioned above is one way (they later become recurring characters), as well as the inclusion of Ambrose from Britain; mentions of Aleister Crowley, "Uncle Rudyard" in Bombay, and more. The attention to these small details are always satisfying and never feel forced.

tl:dr; As a both a horror fan and comic reader, I give "Chilling Adventures of Sabrina" a 10/10 for story, art, creativity, and atmosphere. I can't recommend it enough (literally, I can't stop telling my friends and customers at the store I work to read this book) so go down to your local comic book shop and pick up a copy of the first trade paperback! Or if you're inclined to pick up the individual issues, it's currently at issue #6.