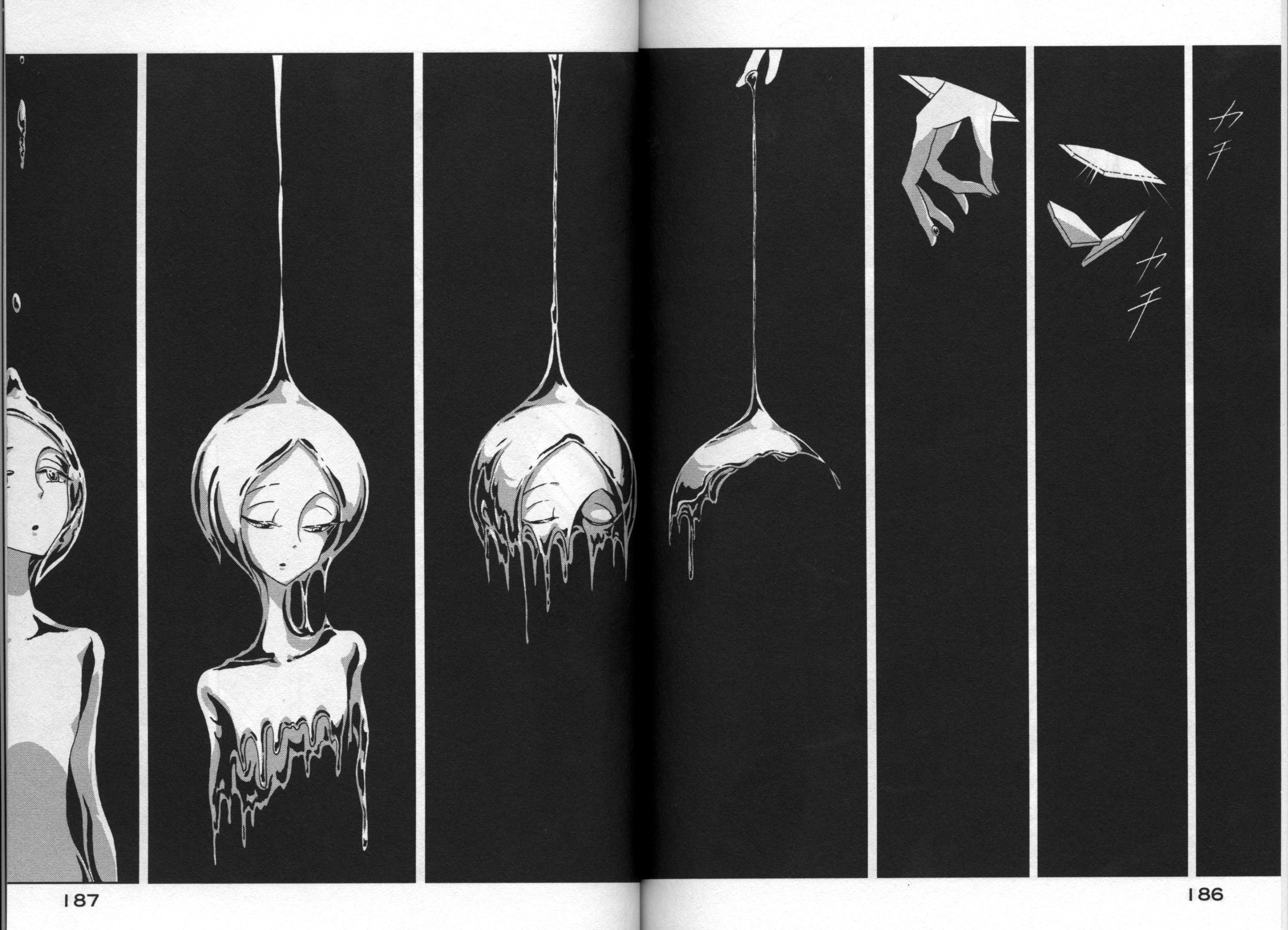 "In a world inhabited by crystalline lifeforms called The Lustrous, every unique gem must fight for their way of life against the threat of Lunarians, who would turn them into decorations. Phosphophyllite, the most fragile and brittle of gems, longs to join the battle. When Phos is instead assigned to complete a natural history of their world, it sounds like a dull and pointless task. But this new job brings Phos into contact with Cinnabar, a gem forced to live in isolation. Can Phos' seemingly mundane assignment lead both Phos and Cinnabar to the fulfillment they desire?" 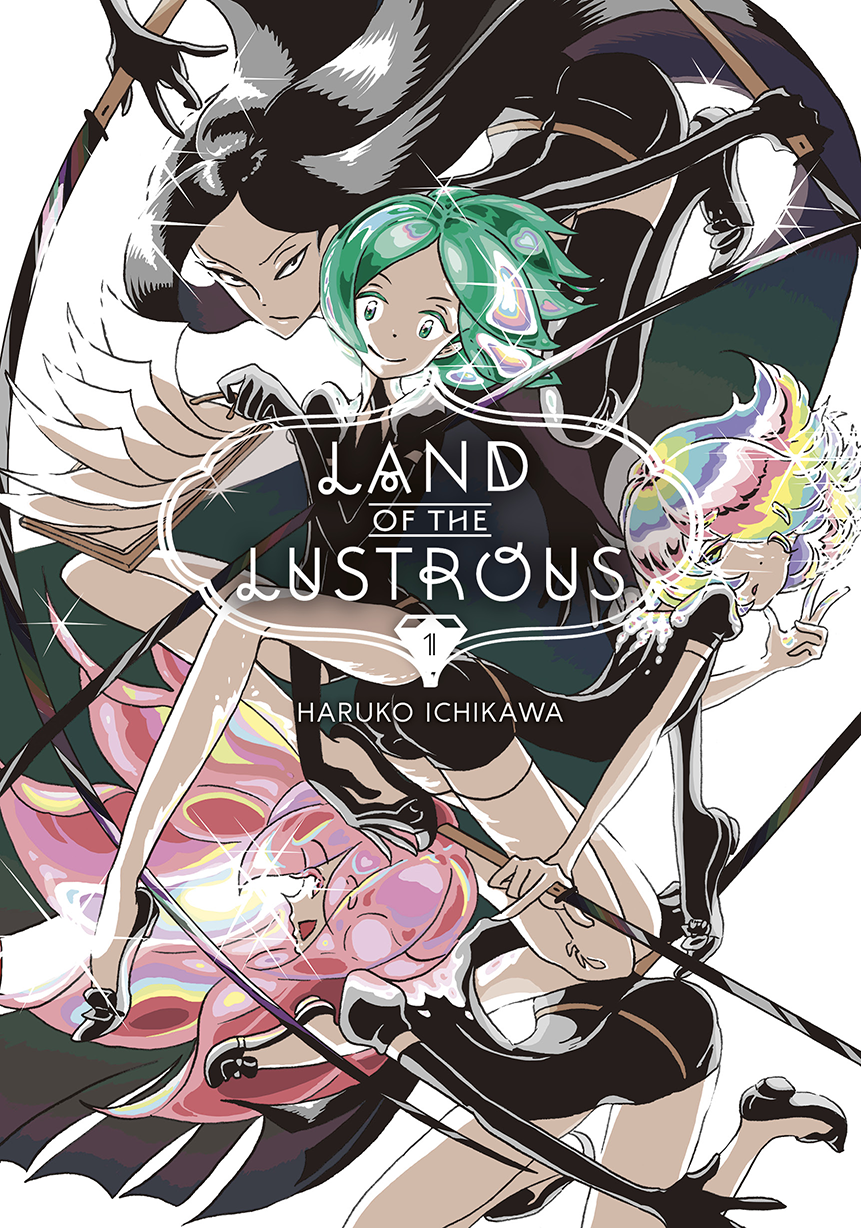 I work in a comic book store. I get to see a lot of things three months in advance, when they're solicited in Previews. Three months ago, I was working on filling out our Previews order when I saw a blurb for Land of the Lustrous. I was immediately intrigued by the cover, and added it to our list.

A short bit of backstory on the series first; this was originally published in Japan as Houseki no Kuni in 2012. It's currently being published by Kodansha Comics here in the US, and was released this June. In 2013 an animated short was created to promote the manga (see below) and in May of this year, it was announced that an anime series has been greenlit, and will premier in October of this year (see the end of this review)

The book's back cover blurb lists it as "an elegant new action manga for fans of Steven Universe" which, to me, was kind of a mixed recommendation. I've seen a few episodes of Steven Universe, mostly early episodes, and enjoyed them, but have never been a hard core fan (and frankly, I find some of the more intense Steven Universe fans I've encountered have put a bad taste in my mouth for the fandom as a whole, which is a shame, because I understand there is a lot to love about the series outside of that). HOWEVER that said, since I don't actually have that much SU knowledge, I was able to kind of look at it objectively and think about Land of the Lustrous on its own merits! (Fun fact I learned while researching this review: Houseki no Kuni predates Steven Universe by a whole year, just putting it out there for folks who'd say this is a Steven Universe rip-off!) 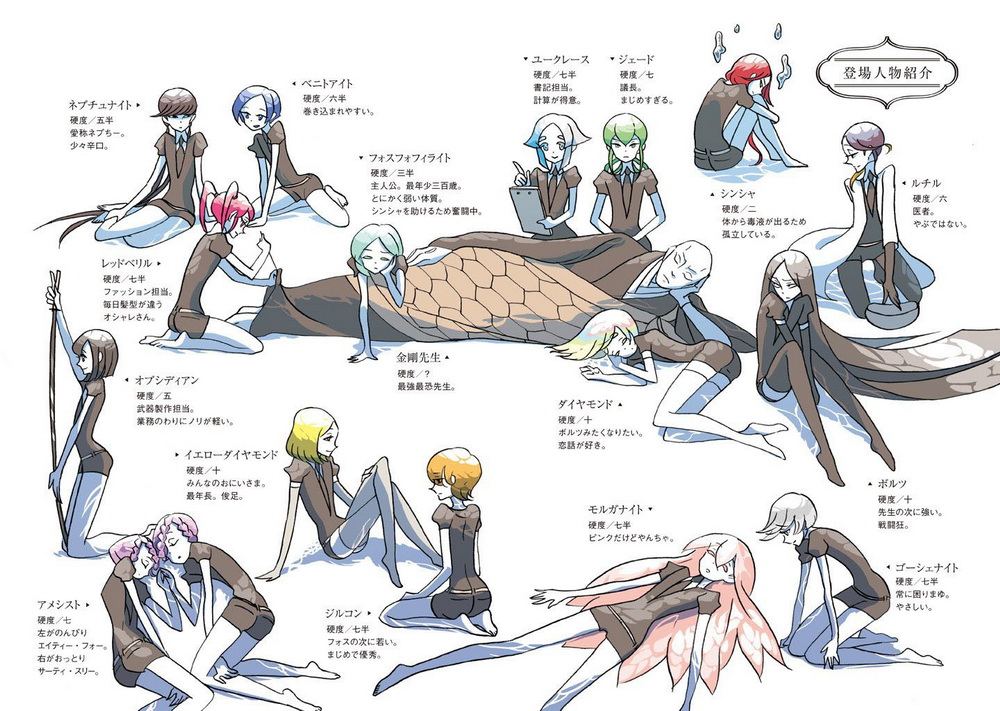 Like I mentioned, the first thing that drew my attention to this book was its art style, which is both simple and fluid-looking, particularly when representing the most crystalline parts of the gems, their hair. The same things that can look shiny and reflective can simultaneously have kind of a viscous, gooey look, and something about that fascinates me. The book maintains a sort of minimalist simplicity that appealed to me in a way I didn't expect; even though manga is traditionally a black and white kind of medium, there is a real sense of the starkness and bleakness of the earth, how empty it is, with broad seascapes, cliffs and endless grass fields. Even amongst the gems themselves, save for their colorful hair, they are all pale, and wear black uniforms. The only thing determining one gem from another is hair color and style, for the most part. Occasionally, this can get a little tricky but once I got a handle on who was who, I was actually kind of surprised how easy it was to tell the gems apart. 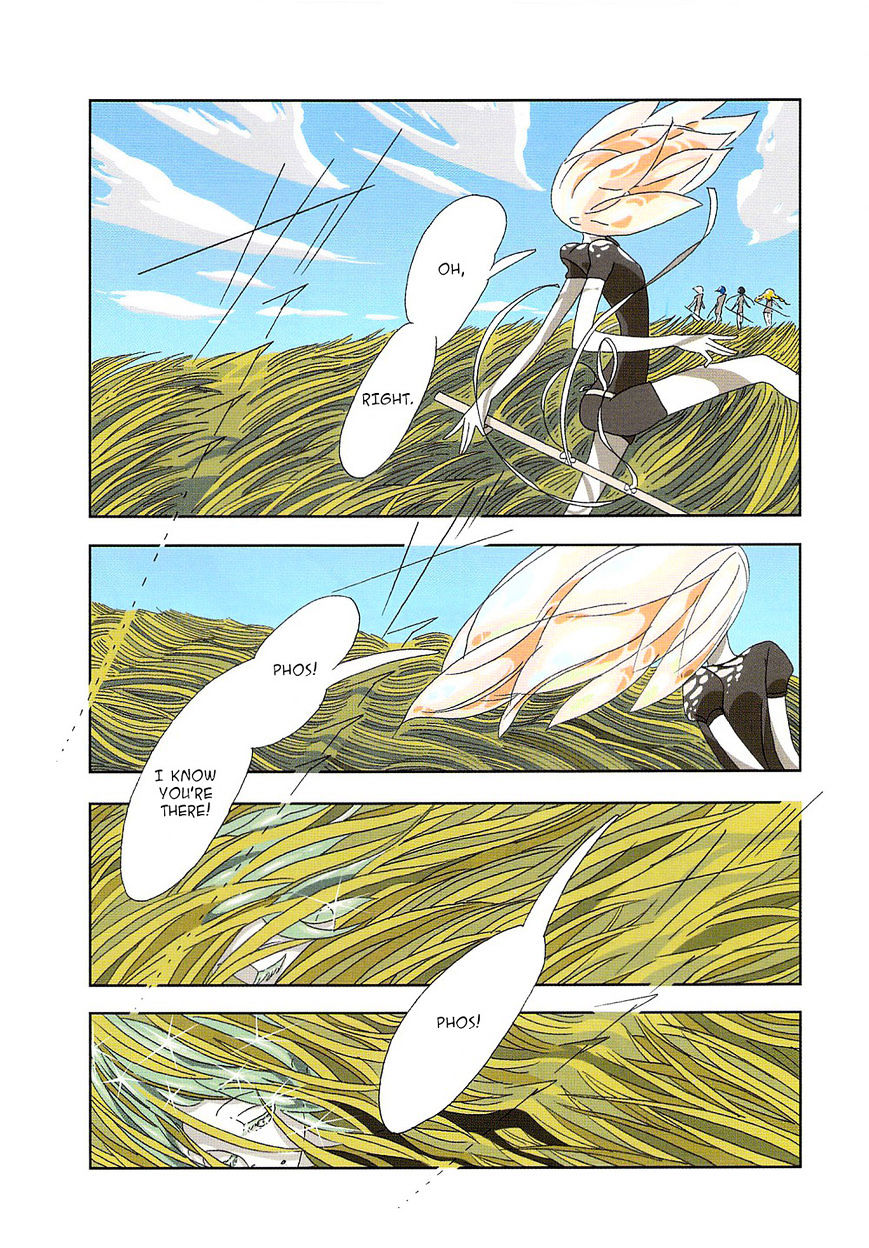 As mentioned above, this is an action oriented, fighting manga. There are many fight scenes between the gems and the Lunarians, creatures from one of the six moons orbiting the planet, who wish to capture the gems and use them as decoration. A lot of the fights could be considered almost gory, in that the gems can and do often shatter or lose body parts, but since they are crystalline structures containing microorganisms encased inside them over time, their body parts and scars can be knit back together, so there is little risk of permanent damage (note I said little risk, but not that it's impossible). This is a concept I'm waiting to be fleshed out more, as it wasn't 100% clear to me upon a first reading, but I'm on board.

All the Lunarians appear to be heavily influenced by Hindu and Buddhist imagery; for example, compare the first Lunarians you encounter at the beginning of the book to a piece of buddhist art of (to the best of my research) Tara Bosatsu, aka White Tara, one of the female Bodhisattvas and a goddess of Mercy. (This may be reading too much into it on my part, but White Tara has a counterpart, Green Tara, and it's stated once in the book that Phosphophyllite should be a tempting target for the Lunarians, because they love the color green. Coincidence???? Who knows! Certainly not me). 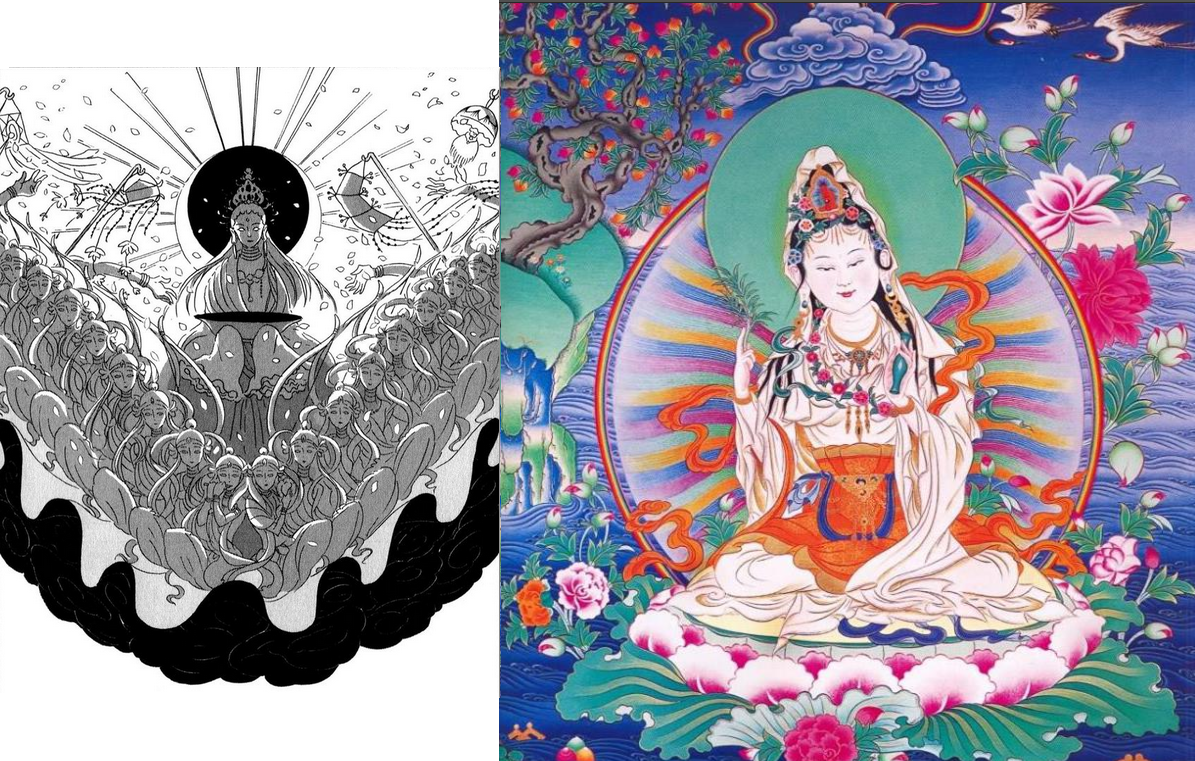 There are actually a lot of interesting ties to Buddhism throughout the story, from the fact that the Lunarians heads, when sliced apart, appear hollow like lotus roots, to the fact that Kongō (as in Kongō-sensei, the teacher/leader of all the gems) is a word of significance in Japanese Buddhism, sometimes referring to a weapon that pierces all evil and represents three elements of Buddhism, as well as meaning "gold, metal, and hardness" AND being related to the Sanskrit word meaning "diamond" and representing indestructability (Thanks, linear notes and the internet!) 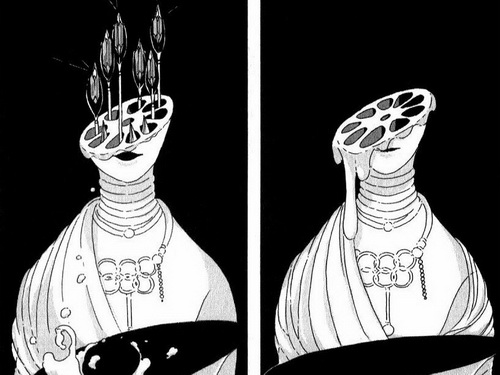 The plot of the story follows Phosphophyllite, often called Phos, who is very fragile and brittle, as well as clumsy and brash, who has struggled to fit in to the society of gems despite her longing to enter battle against the Lunarians. At a loss for what to do with her, Kongō-sensei entrusts her with the task of compiling a natural history, which Phos, in return, struggles with and rails against. 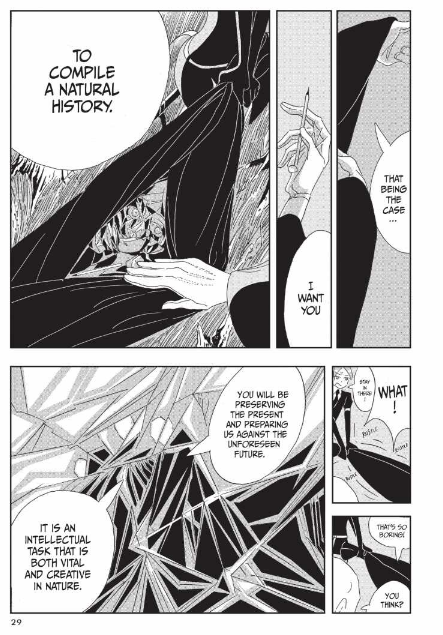 Phos procrastinates, complains and tries to dodge her job, until she crosses paths with a lonely gem named Cinnabar. Cinnabar is given the task of keeping the night's watch for Lunarians to keep her away from other gems, due to the fact that she excretes a toxin that destroys everything that it touches. She hates her ability, and the solitary state it forces her into. The Lunarians attack, and Cinnabar fights, although she is almost overcome, and Phos saves her, but is heavily damaged by Cinnabar's venom in the process. 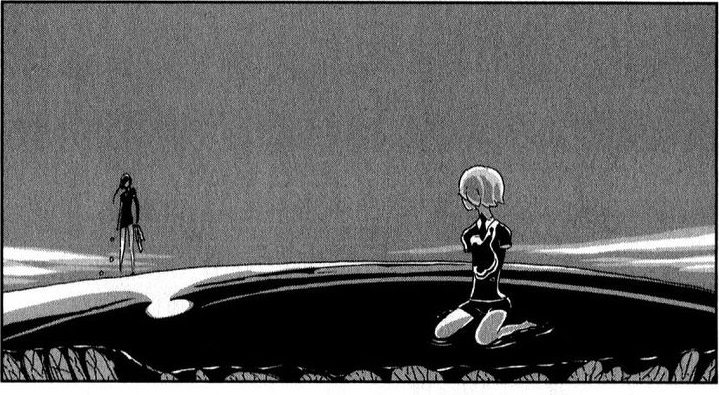 The plot goes forward from there, and I don't want to give anything further away. The more I got into the story, the more intrigued I was by the structure of the gems' society, how they do battle, and just what is up with the Lunarians, anyway? The art was charming, and I was genuinely touched by the battle mentioned above, where Phos tries to save Cinnabar. I would definitely recommend this series; as it says above, for people who are fans of Steven Universe, but as a broader statement, I'd recommend this for people who like their action tempered with a intricate and developing mythology of the race of gems, with sincere stories about insecurities and weaknesses, and what really makes someone tough. 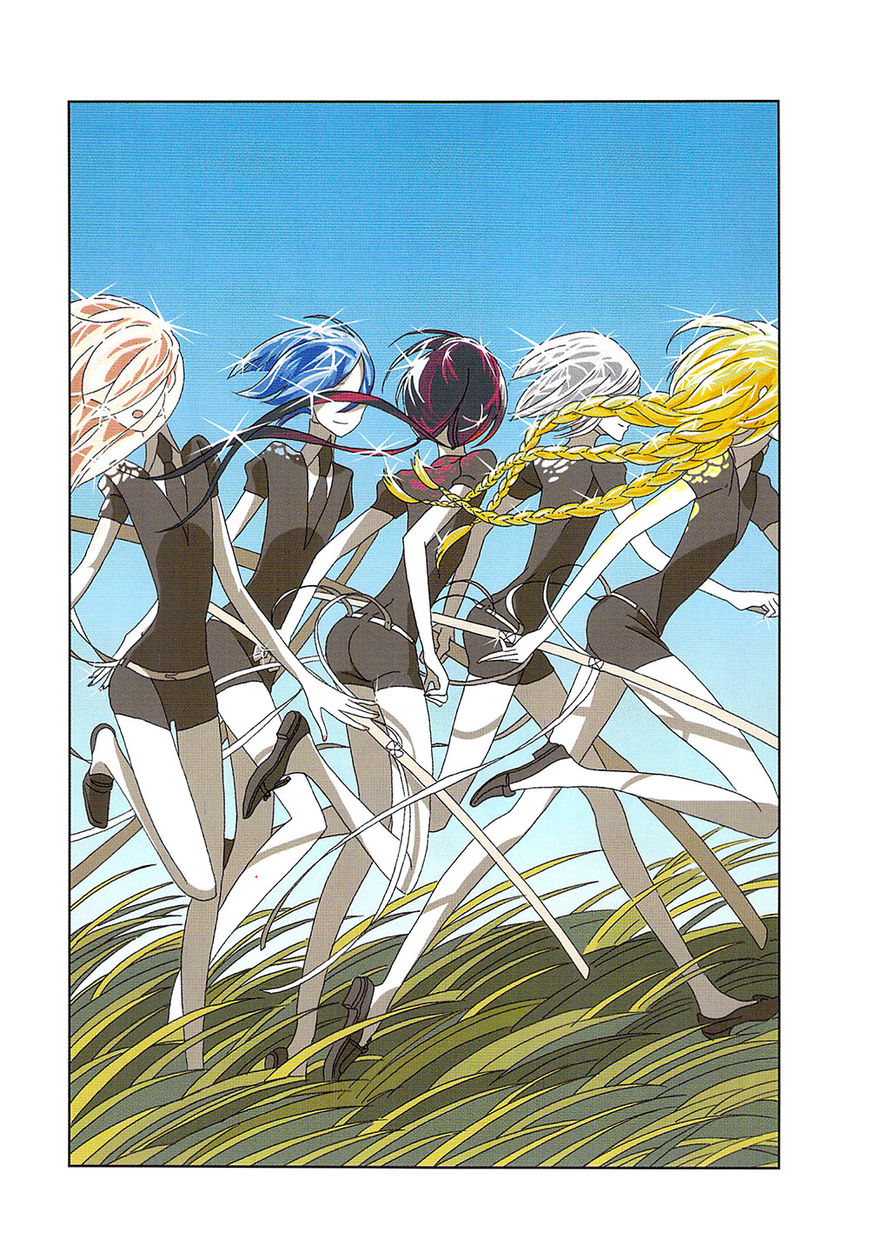 Funko Pop! Vinyl is the Death of Collectibles