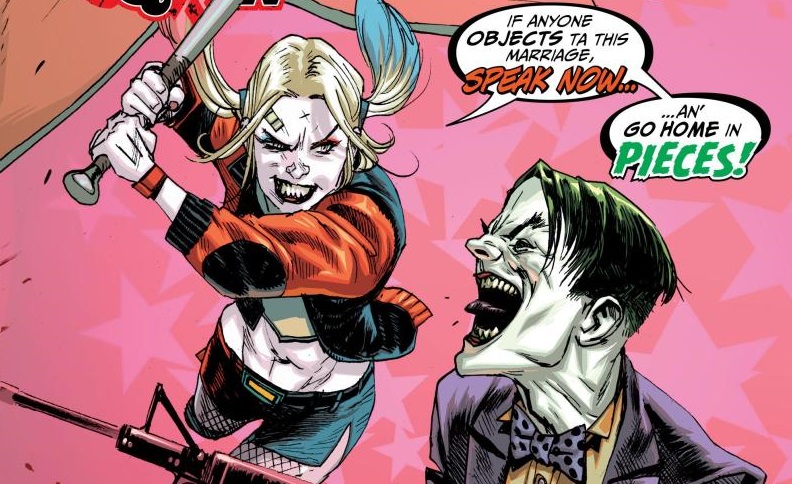 Batman: Prelude to the Wedding: Harley Quinn Vs Joker Review

I have not been a fan of, or consistently reading, Harley Quinn in years. I found the Conner/Palmiotti team's work to be contrary to what the character represented. Great, interesting stories can be written with this character, but for the better part of a decade, she was reduced to Deadpool without the charm, and drawn with a body that can be the butt of a joke (no pun intended), as the focus of a certain type of reader. She was a sexy fart joke. More recently, with the general public coming to understand that her relationship with the Joker was not something to idealize but something to avoid in real life, the character herself strayed further away from the clown act, both in personality and the man himself, opting to take on a very one-dimensional Strong Female Character (tm) personality. Joker was represented as charmless and ruthless and Harley was shown reacting with unpredictable, extreme violence any chance she was given, to the applaud of diminished readers everywhere. The cautionary tale that was their relationship, and in my opinion the slow progress towards the closest thing to normality characters like this could have that was worked towards in the comics, and especially in the DCAU, was removed. I've complained about it before. When Rebirth started, for some reason, the creative team was kept, and the title didn't improve. Since, the character has had three creative writing teams in under a year (including the original Conner & Palmiotti). All said, it doesn't generate positive ideas of what may come out of the series. This issue changed that. 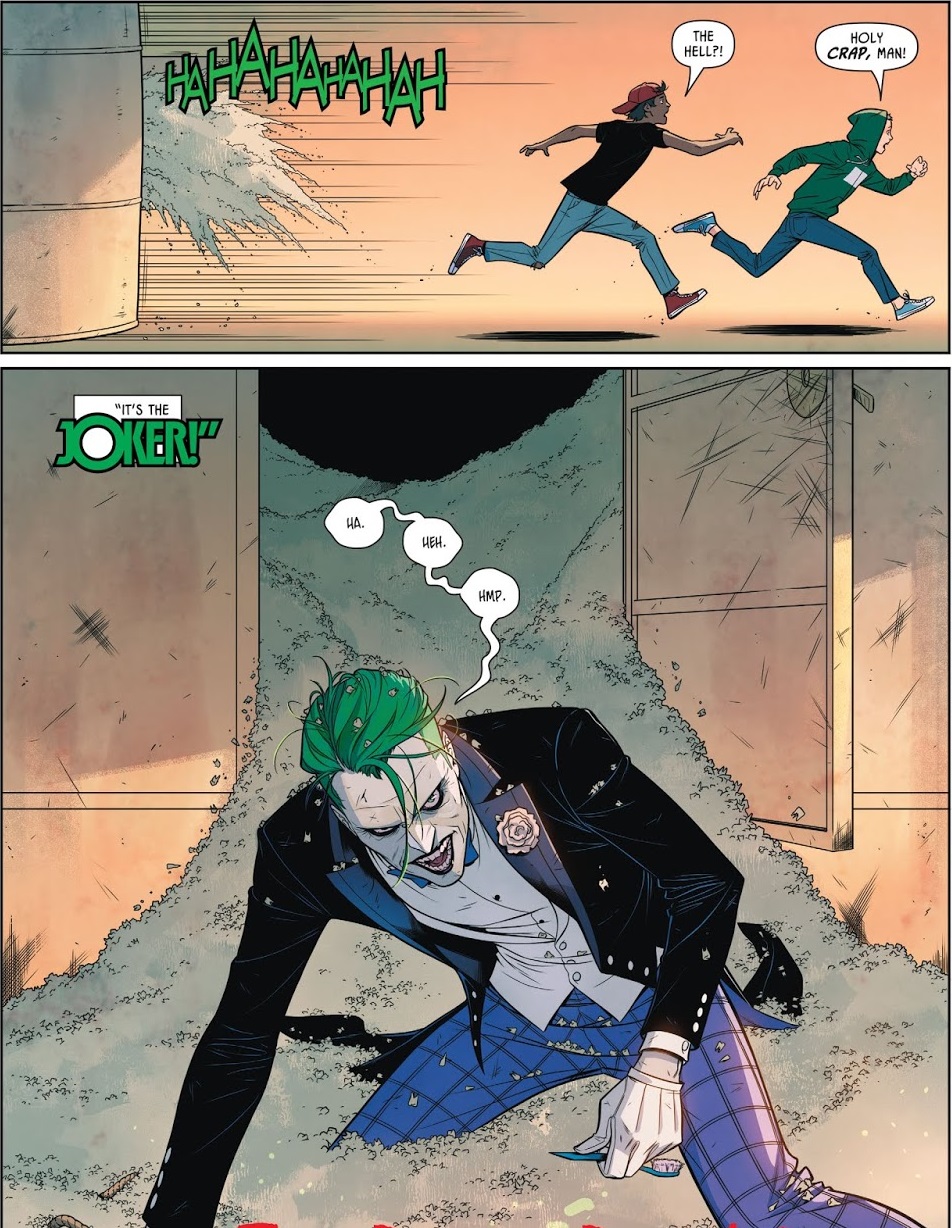 The comic starts with two kids in a bad part of town, talking about how super villains once used the warehouses they are hanging around for secret lairs to plan their evil doings. From a silo filled with teeth, out pops Joker and, as soon as he stands, he is hit by a car. Given the title, it's Harley, and she's angry. Soon after, she has him tied in a vat quickly filling with pudding in a death trap of her making. In the rest of the comic, the two mostly talk as Joker tries to escape and, in doing so, realize that they know each other better than anyone else, and the prospect of a reunion seems less unlikely than in the years of prior less-than-subtle abuse and violence. Yeah, it's violent, but it's not out of character, and it's not less than funny. It's them. 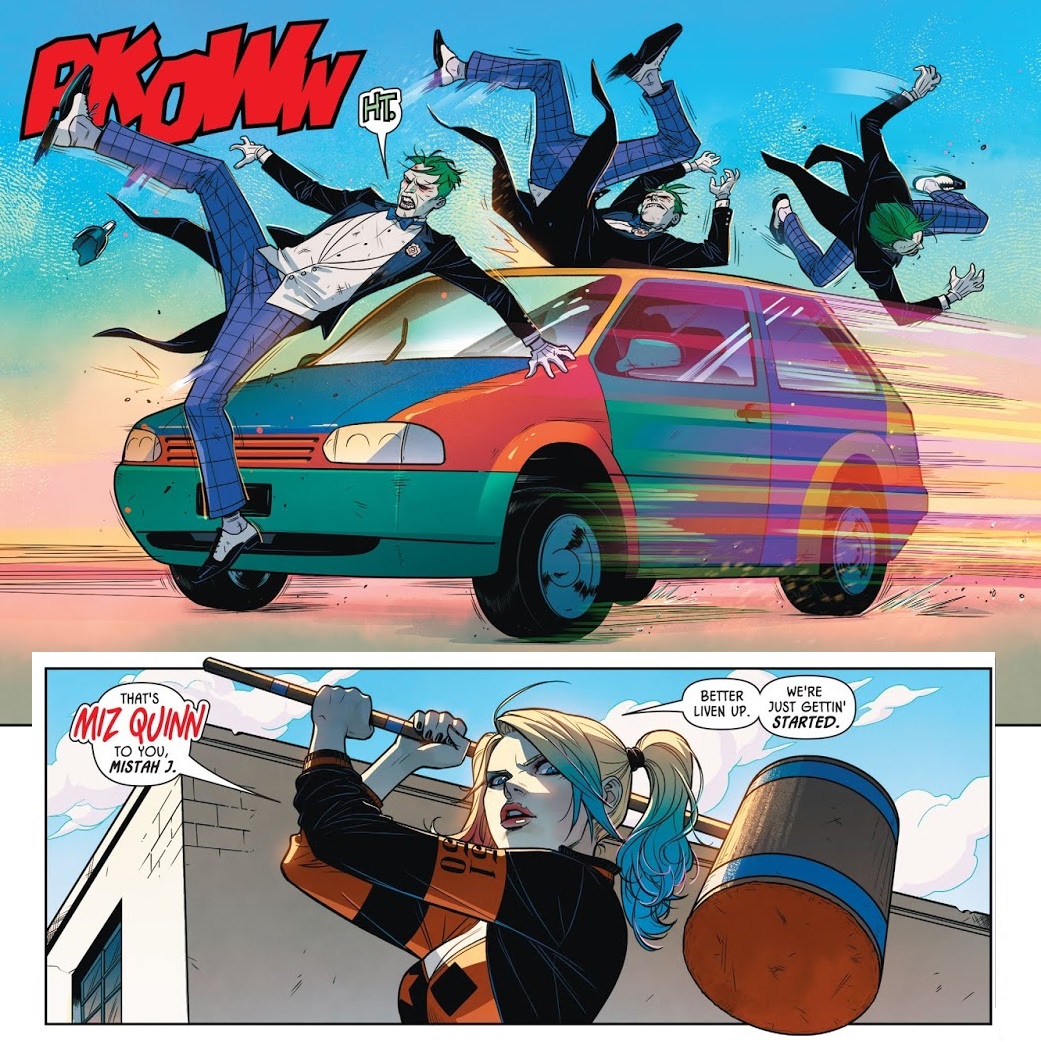 A few things really struck me about this issue. Namely, how in-character our players seem. That shouldn't be a revelation or relief for a reader of a comic but, given the past few years of writing, it's refreshing to see the two interact as equally intelligent people with their own personalities and a history that isn't boiled down to straightforward and senseless abuse. Harley outsmarts Joker, Joker outsmarts Harley. Harley predicts Joker's actions, knowing his each move until she reaches something she can't predict, in this case that's the move of another of Joker's old lackies and their dedication to him. It's an echo of her old self. It isn't treated as something she has fully left, either, but instead something that will always be a part of her. Let's be clear, in my opinion it's all together ridiculous to try to remove everything that is Joker from Harley when she created her act as a counterpart to his. The name she has used since her first day in red and black was one he gave her. That's not an accident. 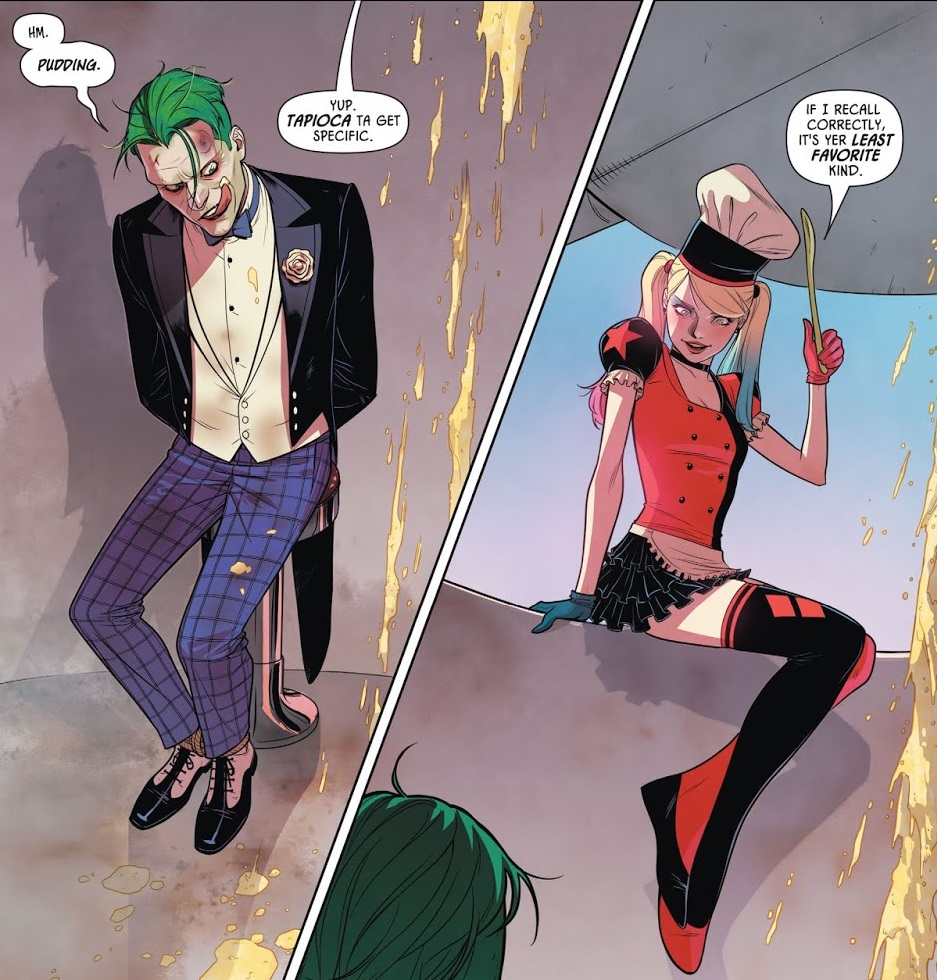 What also struck me was how unmalicious the two seemed. Even when Harley is planning to kill him, Joker knows that she won't, and she knows he'll escape. It's a game between the two of them and always has been. Even when given the opportunity to kill her, he doesn't, almost to his own surprise. While he is shown claiming he always respected and needed her while in chains, it's later demonstrated that he could escape at any time. He wanted her to know what he told her and used what looked like his immediate danger, to her, as a reason. 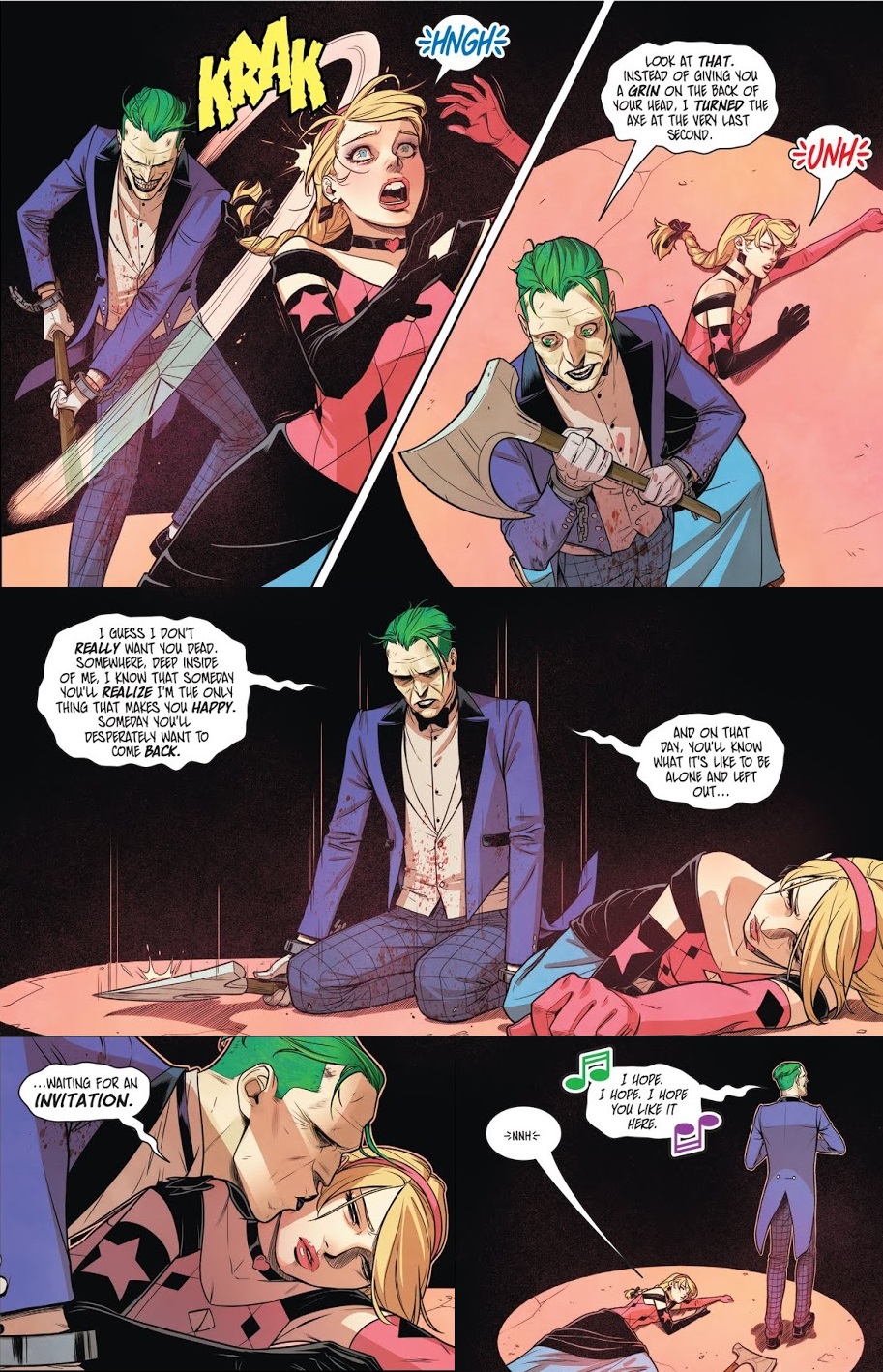 In short, it's nice to see Harley played as smart and capable and it's nice to see Joker as more than a simple monster. It's refreshing for Harley not to be in constant jeopardy at the hands of her previous partner. It's almost pleasant to see him show the closest thing he probably has to respect for anyone that isn't dressed as a flying mammal. It's also nice to see something resembling their classic character designs. Joker doesn't look like an edgelord (any more than he has for 75 years) and Harley isn't in a revealing outfit, unreasonably stacked for a lithe gymnast. Her outfit resembles something she would have put together in the animated series. Joker's outfit looks like something from a classic comic (and Nicholson's pants), and in many panels looks like an updated, modern take on the classic B:TAS design in terms of facial expression and modeling. 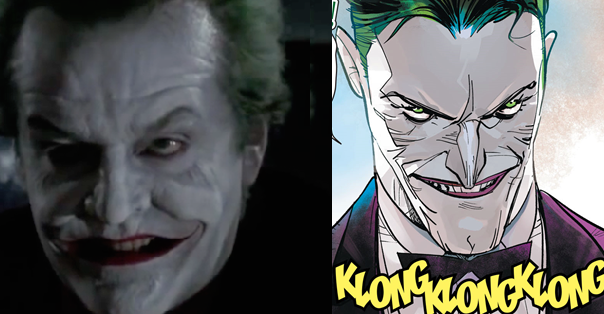 Speaking of Nicholson, there seem to be two panels taken straight from movie shots, for better or worse. (Above: Nicholson's "Wait 'til they get a load of me", below: Leto's Joker bangs his head against the side of a car - at least in this comic, Joker's hitting his head against the side of his prison to test for weaknesses, not because he's So CrAzY)

To sum up, thanks are due to writer Tim Seeley, artist Sami Basri, and colorist Jessica Kholinne. The only downside is that this issue is a one-shot, not part of the regular Harley Quinn solo series. The issue ends with a prompt to read Batman #48 and #49, the two issues immediately prior to the penultimate wedding issue, Batman #50 coming up next Wednesday on the Fourth of July. With the Joker's fate at the end of #49 left in some degree of question (inasmuch as any character in a comic book's fate can be), it adds a layer of bittersweetness to this issue, and for fans like us who have been rooting for the pair, watching them grow and develop for decades now.

Hopefully what Seeley has brought to the table here can be expounded on more, and we can see him return for more wicked banter and clowny laffs soon.

The XIII Club 5: Cut The Sheet