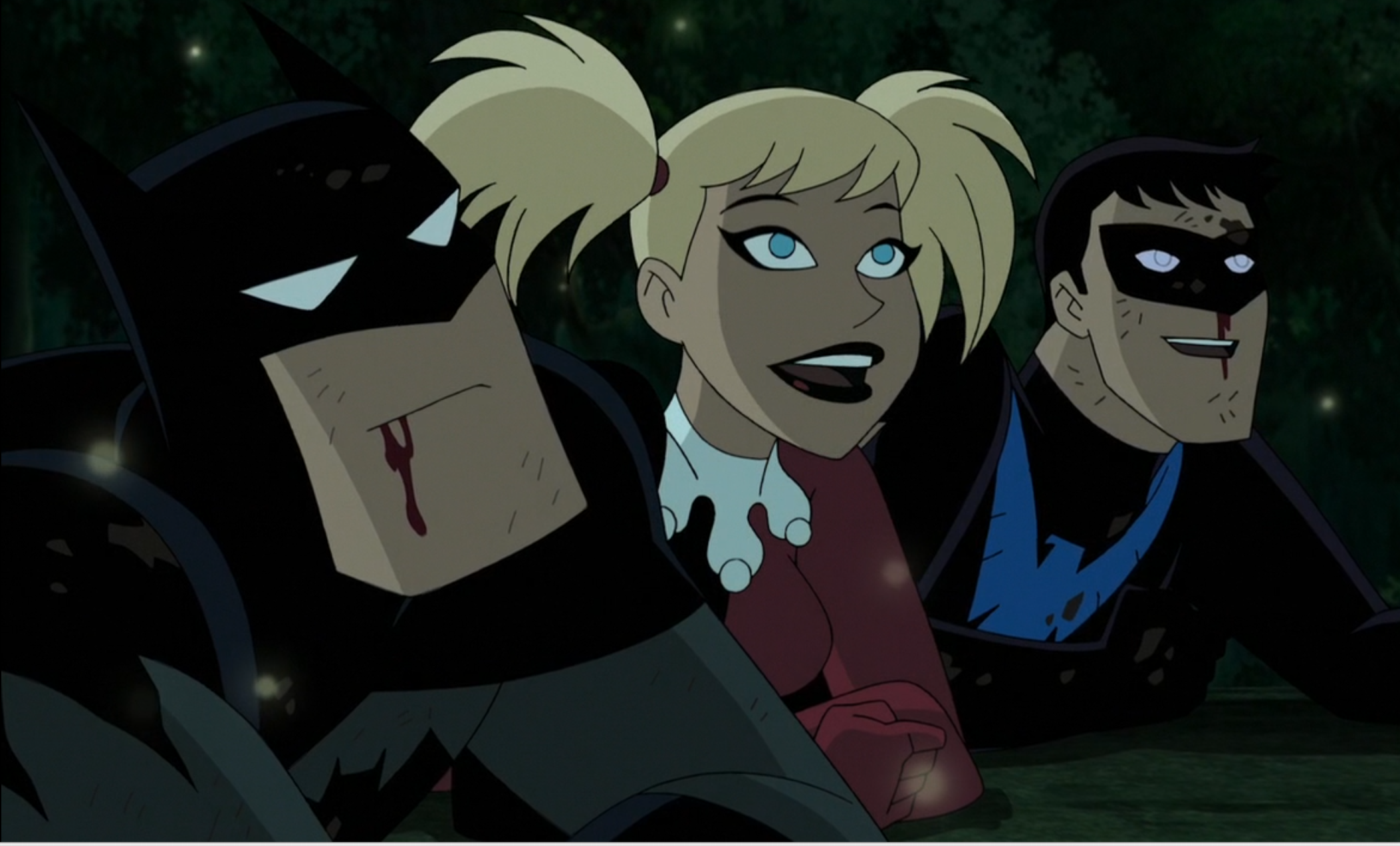 Several of us here are big fans of the character of Harley Quinn and have some pretty specific ideas about what makes the best media featuring the character. In recent years, DC has struggled to represent her in a way that fans of her original incarnation, the Batman The Animated Series show and spinoff comics started in 1992, find both appealing and on model for the character.

DC has released many products geared towards that audience with the image of the animated character, many of them high end and relatively expensive, which means they know that the market is both hungry and willing to spend money. For the past few months, the character's creator, Paul Dini, has had a backup story in the current run of Rebirth Harley Quinn, one of the only titles to not get an actual canon and creative reset at the start of the year. The stories have been cute but light, making them a refreshing return to form from the edgy, joyless run of New 52 and relatively tactless and meandering writing of Conner and Palmiotti. With the release of the Batman & Harley Quinn film, co-creator and designer of the Gotham City siren Bruce Timm makes similar moves, giving audiences a movie that injects that cute and lightness with an addition of some occasionally jarring fan service that many accuse Timm of being responsible for in previous DC works. 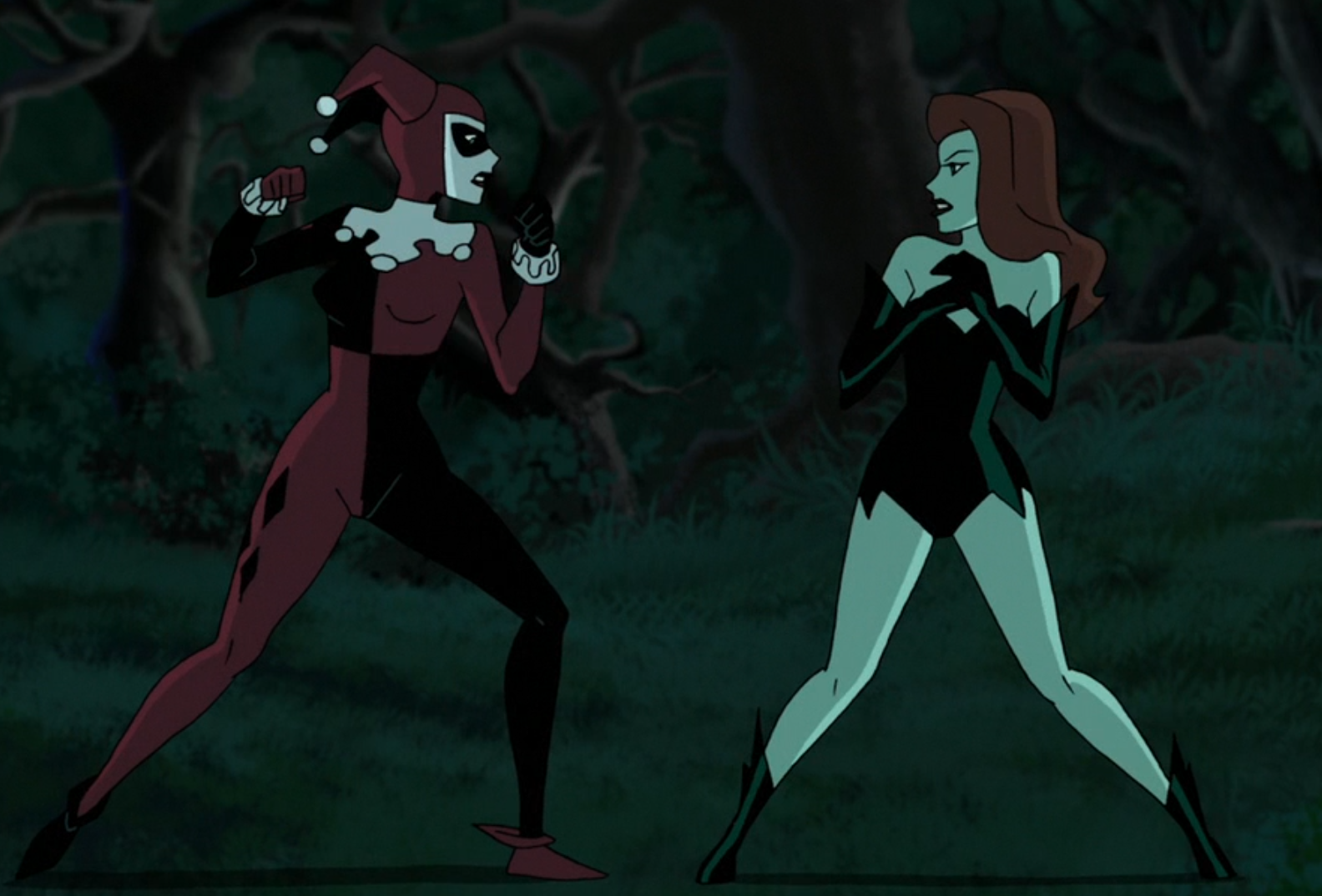 The film itself is somewhat light on plot and story compared to other DC animated features, which is one of my main issues with the past few years of Harley Quinn solo comics but seems more forgivable in an animated format with a combination of talented new voices and classic actors playing these roles. The film starts Melissa Rauch as Harley and Kevin Conroy and Batman. I won't warn of spoilers because there isn't much to spoil: the film is more about the journey than the destination. Batman and Nightwing need to stop Poison Ivy and the Floronic Man from ending humanity, and Harley is recruited from civilian life to help stop her old partner in crime. When we find Harleen, she is working at a restaurant and bar in which women dress in slightly more sexualized versions of classic DC heroes and villains to serve entirely male patrons, hiding in plain sight after disappearing from both her life of crime and the public in general. It's Hooters with spandex costumes. While the move is somewhat eye-rolling, Harleen stands up for herself against an aggressive patron and is shown as doing what she must to survive. It also serves as a nod to Kingdom Come's superhero themed restaurant at the end of the story and a dig at Harley's more risque (and sometimes less suited to the character) iterations and costumes, putting her in red and black pigtails while real Harleen is still a blonde in her everyday life. 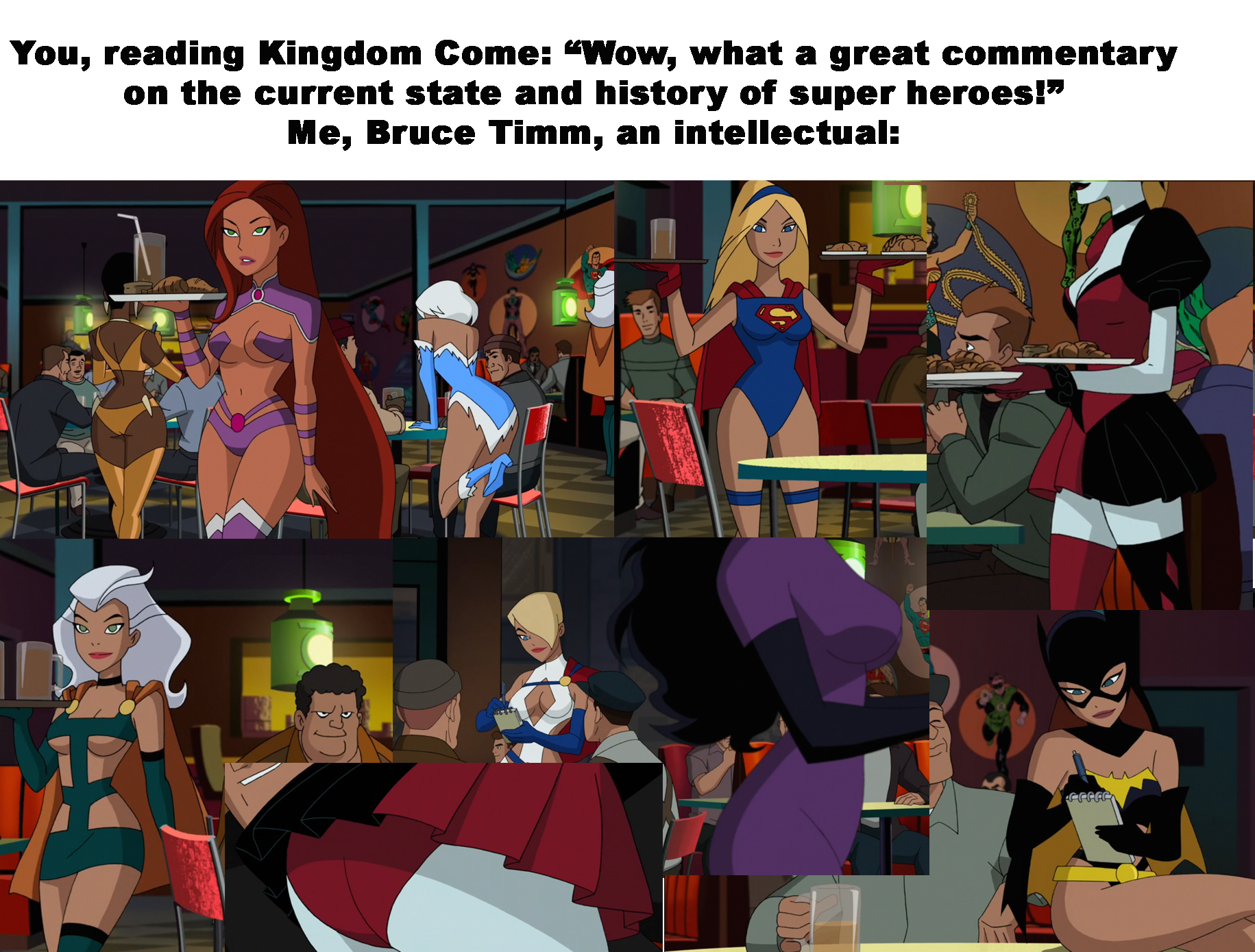 Nightwing follows her home, she tells him she doesn't do the costumed stuff anymore, and after a fight, she bests him with a low grade Joker toxin (the only reference to the character and "the only good thing that asshole ever gave her"). Nightwing is soon found bound to her bed in her apartment, and a conversation and a dick joke later, she is undressed, the lights are off, and some implied funny stuff takes place between our hero and a guy she once knew as an adolescent boy. This will likely be the most talked about scene in the film, and given the Batgirl and Bruce scene in The Killing Joke, it feels like audiences were clinched for something of this sort. That said, it's far less questionable and mostly a brief bit of fan service (don't worry, he told Batman they just "made out"). 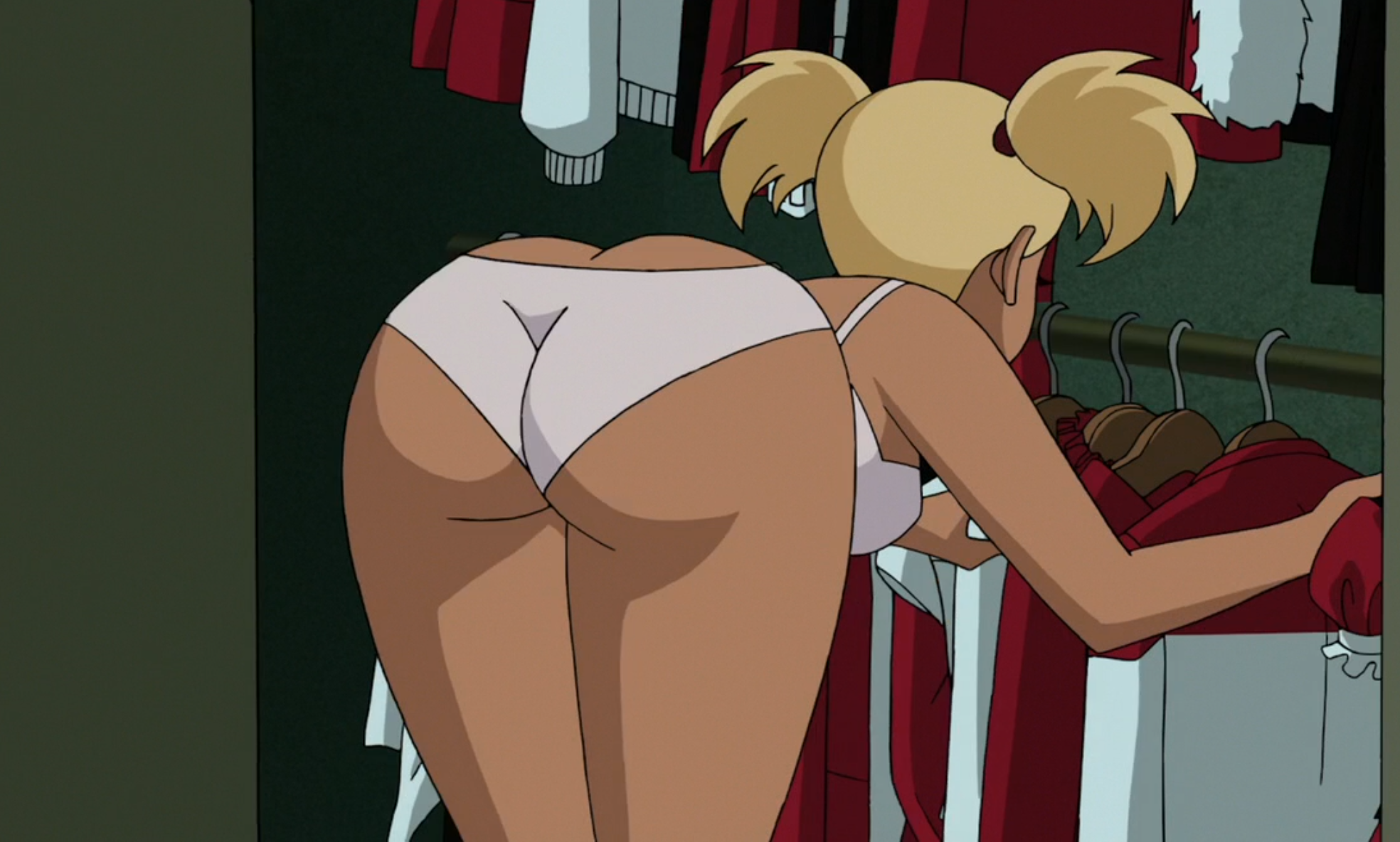 In my personal opinion, it also isn't the most obnoxious and unceremonious use of a plot element built around a dick joke that DC has done with the character since Rebirth started. 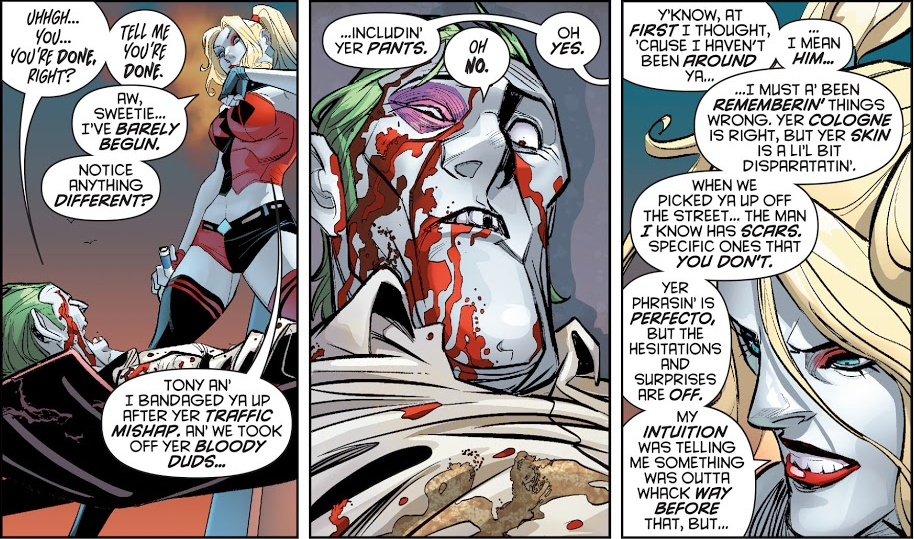 While some might find the scene unneeded, it does serve to humanize the character and give the audience something to empathize over. Harleen and Nightwing debate about her job choice, at which point she tells him that finding a career after a life of costumed crime is not simple and offers her stack of rejection letters. If anything, this film does seek to make Harley more relatable and remove the "bUt ShEs CrAzy aNd A MuRdErEr" complaints that many make of people who enjoy a silly but also complex fictional antihero. 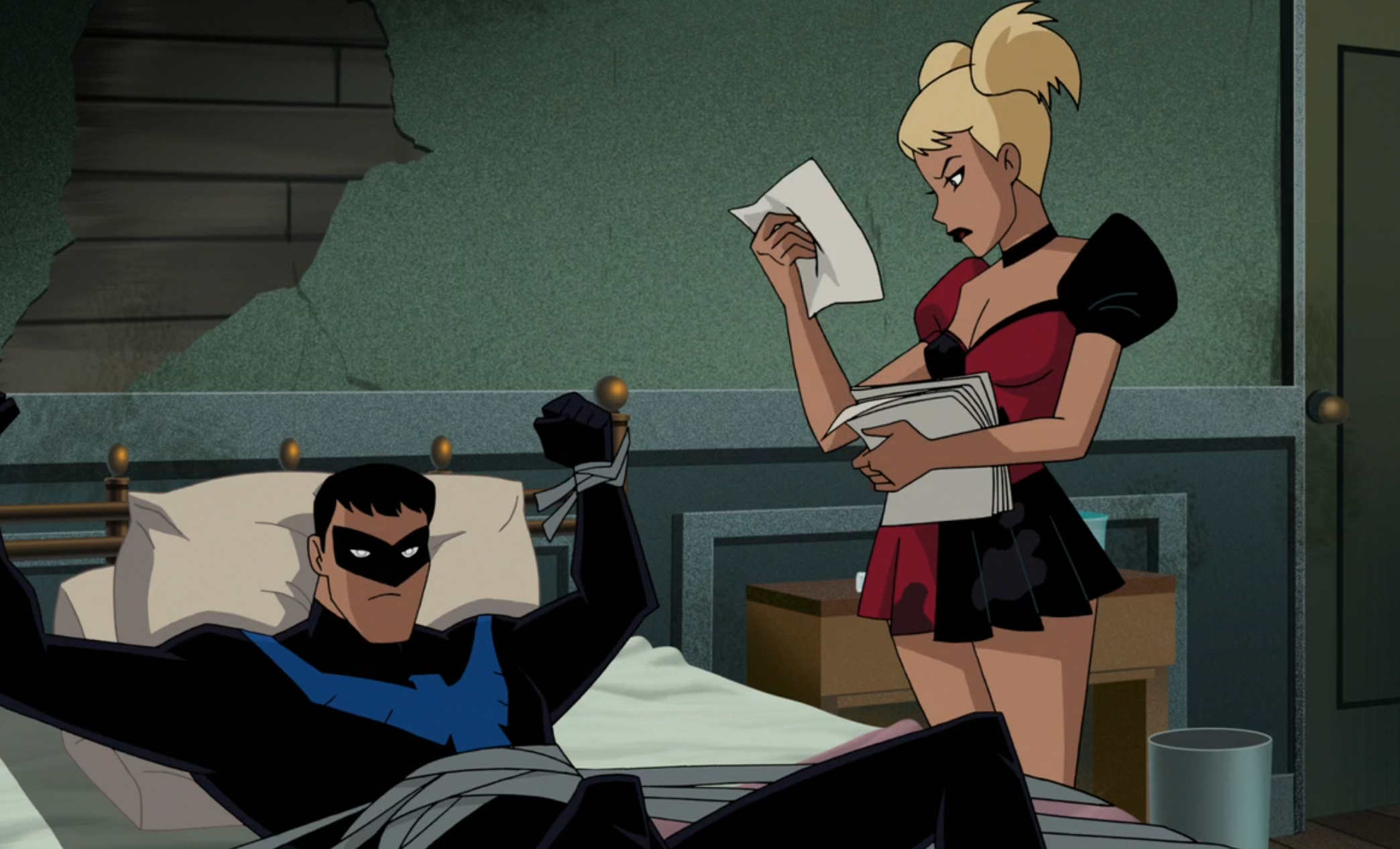 After recruiting her, Harley tells the Dynamic Duo they can gather information at a bar populated by henchmen, a reference to many episodes of the Animated Series. This scene starts as one of the film's most fun and becomes one of the more tedious, as an informant insists that Harley sing in exchange for information. Another move taken from what may now be guidelines for DC animated features started in The Killing Joke, this musical number is far less fun and makes less sense. It's mostly somewhat shaky animation of henchmen dancing and, the main focus, Harley shaking around on stage. The shots choose to give her hips and bust a strange pronouncement and elongation to give her curves that are not only unnatural but seem to be created out of nowhere, like she is a Ralph Bakshi cartoon that chooses it's proportions at it's whim.

It seemed as if the creative team had her sliders turned up.

Unlike the previous film, it does less to entertain an audience that isn't interested in watching her dance, with fewer creative shots that stick more closely to the style of the second run of Batman The Animated Series, New Batman Adventures, known for it's simplified designs and animation. There's a batusi reference that doesn't hurt my feelings.

The team track down Ivy and Floronic Man, another fight takes place, and Harley is given a moment to exhibit her compassion for others, caring for a dying scientist the team exploited. Tracking down the pair after their escape, the film's climax ends in another series of fights between the group of heroes and villains, and Harley and Ivy given a scene of surprisingly brutal catfighting that ends in the pair reminding themselves of their past affections. 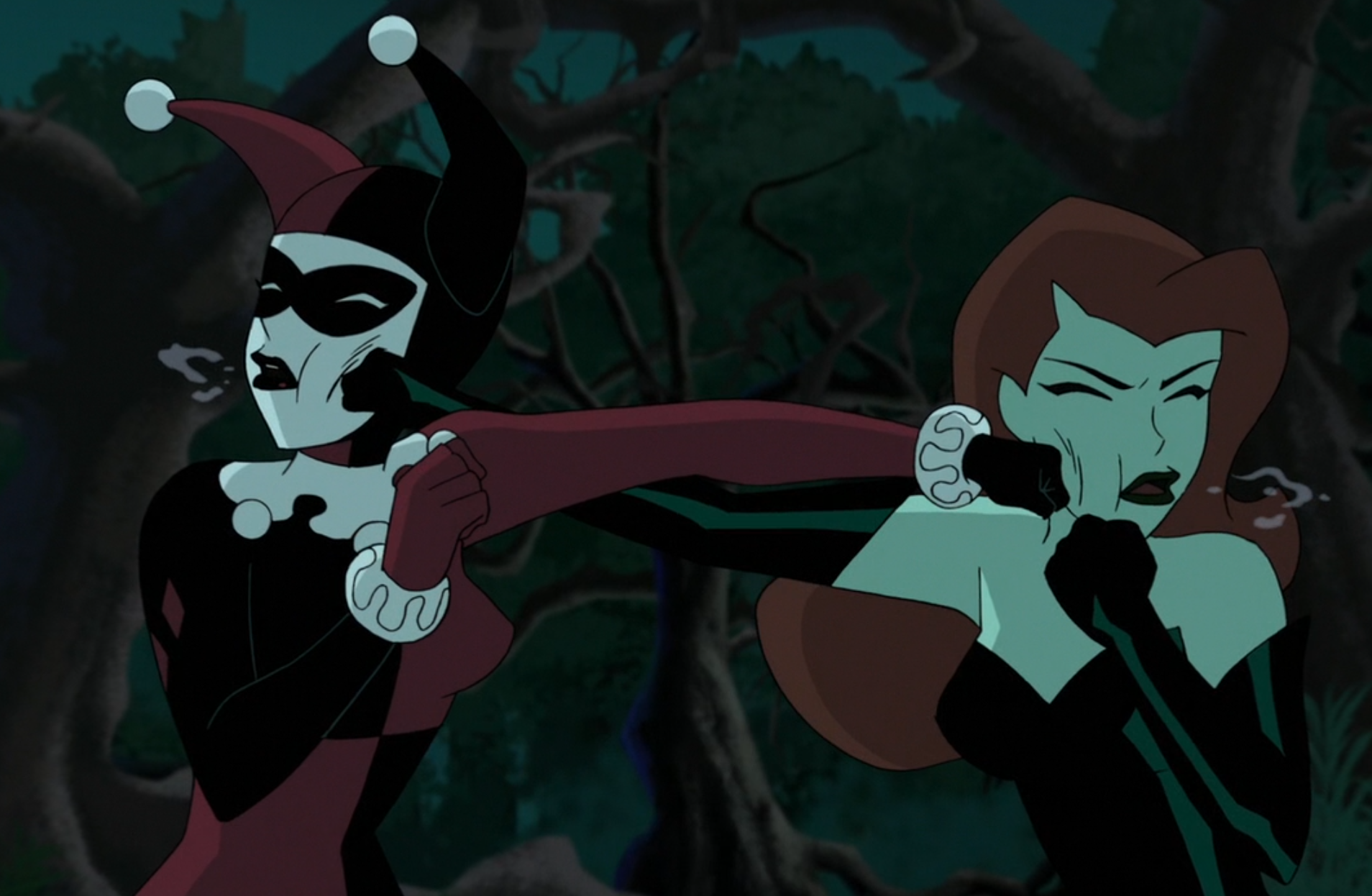 There are a few additional surprises, and a fart joke that is equal parts painfully unfunny and amusing only to hear Kevin Conroy's stoic performance say "it's not that bad" about diarrhea fumes, but all in all, the film is fairly short while also feeling like it occasionally takes it's time in scenes that might not need it. The focus of the film is a few beloved characters, and we are given limited locations that make the film feel like a B movie on budgeted sets, though this may or may not be intentional.

Not to beat a dead horse and make the entire write-up about the designs and animation focusing on the body of our main character, but another peculiar thing that we independently realized after watching the film was how little they gave Ivy the same odd gaze that was given to Harley. The shots of Ivy's body were far fewer and the details, in a spinoff of a series with limited detail in the design when compared to the Animated Series, she was given none of the lines and shapes that suggest the feminine attributes of her figure. It seems like the design team had a favorite. We don't say this because we pay strict attention to the way women are drawn; it is very much in the focus of the visuals on this feature. 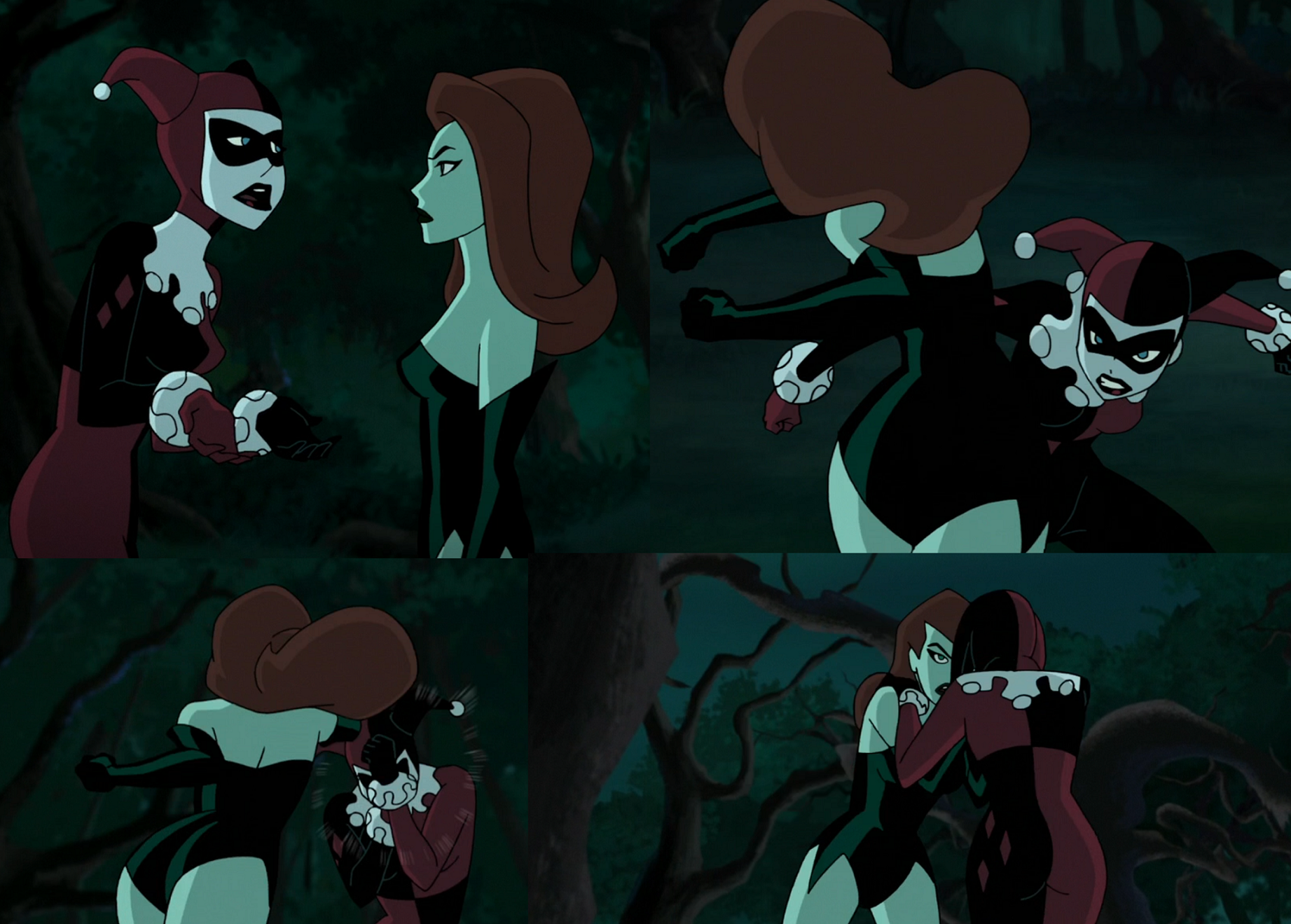 Fans of the character will likely enjoy the return to a more classic representation and story. It's good to know that DC is putting a toe into the water to feel out their ability to write the character in a manner that feels like... the character, and for fans of that version to put their money where their social media comments have been for many years. 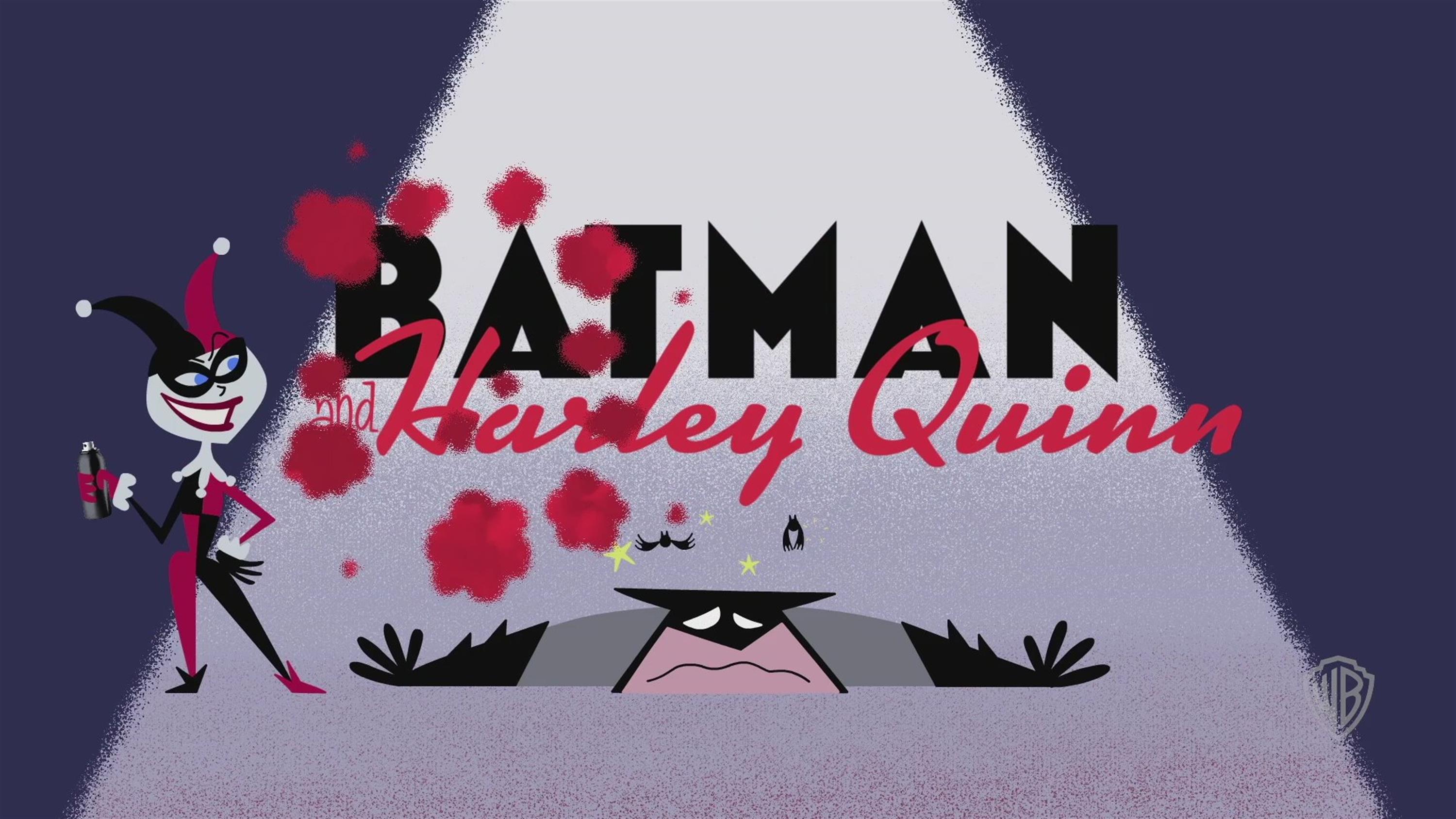