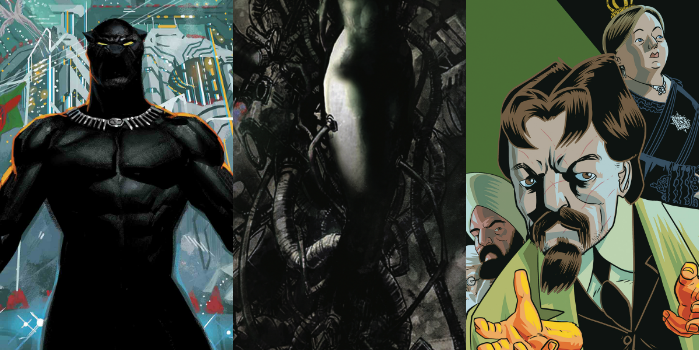 Honestly, perhaps getting back into launching this series in May was poor timing. There has just been a comparative dry spell in new comics worth writing about these past few weeks, particularly those outside of Marvel and DC. It's Summer Event season, so from those two alone, we're looking at Marvel's Fresh Start titles slowly rolling out (see my post on Venom a few weeks back), Infinity Countdown, and the fast approaching wedding of Kitty Pryde and Colossus; DC has its own nuptials with their own "kitty", the wedding of Bruce Wayne and Selina Kyle, as well as the Justice League: No Justice weekly miniseries (again, see past reviw), followed by a big shake-up in creative teams, and the newly-started Flash War. Interesting releases from Image, Black Mask, Dark Horse, and the rest have been very sparse. Hopefully they'll pick up later this summer, but for now, here's what I've got. 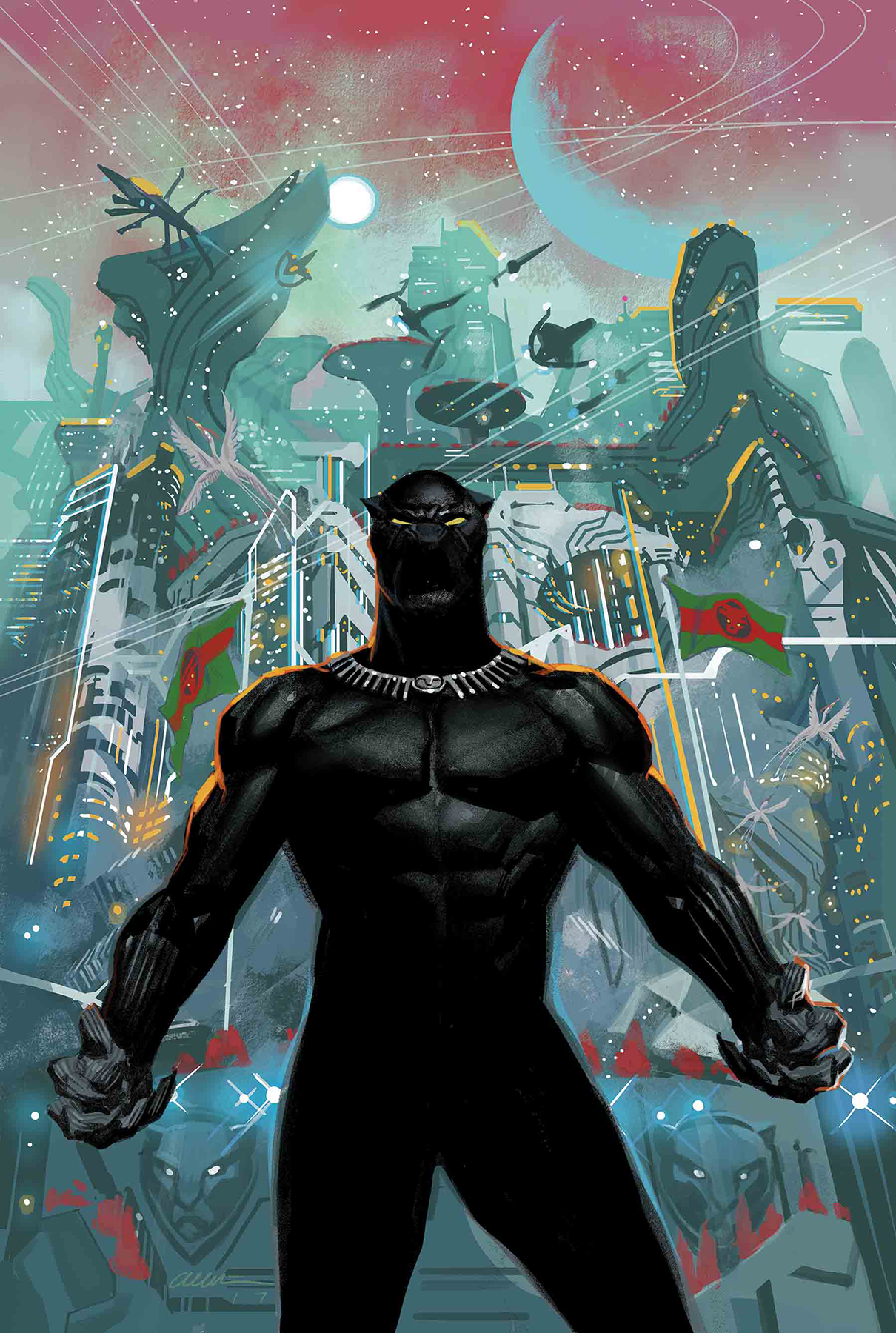 A bold new direction for the Black Panther! For years, T'Challa has fought off invaders from his homeland, protecting Wakanda from everything from meddling governments to long-lost gods. Now, he will discover that Wakanda is much bigger than he ever dreamed...
Across the vast Multiverse lies an empire founded in T'Challa's name. Readers caught a glimpse of it in MARVEL LEGACY #1. Now find out the truth behind the Intergalactic Empire of Wakanda!
Ta-Nehisi Coates welcomes aboard fan-favorite artist Daniel Acuña for a Black Panther story unlike any other!

I'm not going to pretend to be a big Black Panther mega-fan. The character's meteoric rise to popularity since the movie came out, and before that, when Ta-Nahisi Coates took over as writer in 2016, brought tons of new fans, either from the silver screen, or from the pages of Coates' novels or correspondant pieces. I was certainly excited to see his name next to a Black Panther title, and thought this might be an entry point for me to finally really get into the character, especially given that we live in a time where Black voices have never been so important, and in many ways, less heard than ever. However, despite my best efforts, I was never taken by Coates' writing style for this series. The fact his main experience has been in writing long-form prose is evident, in the length of his story arcs, and the way that, while any given handful of pages may seem busy and important, it actually takes several issues for anything interesting to... happen. Pacing is a big issue, and fights / action sequences are often hit or miss to me. I continued to read Black Panther, though trying to find something to keep me interested, until I finally gave up partway through his second story arc, Avengers of the New World. However, when this new Black Panther issue came out, with a new #1, I decided to give it a go. It could be that he's just... new to writing comics, and over time, he will loosen up and realy find his groove with the medium. And I'm happy to say that this issue was, in fact a bit better. We are dropped in the middle of space, in the distant future perhaps, where a colony of Wakandans have built an empire on the backs of slaves, presumably captured from planets and races they have conquered. Our hero awakes, and attempts to escape beore being captured and sent back to the mines. Througout he has flashes of a woman that appears like Storm, asking him to come back home safely, although he can remember little else. A rebel group called The Maroons, who dress in panther-like attire, stage a break of the prison mining facility, and rescue many, hoping to recruit them as soldiers to their cause. After performing acts of heroics in the breakout, a commander of the Maroons gives our hero the name "T'challa", after "a man who was born a king and died a hero". Raising many questions about the identity of the man we just followed for an issue, how he got there, who the Maroons are and their mission, and more, this is a compelling first issue. On a personal note, I'm not always the biggest fan of being dropped into a major storyline change when it's so tonally and thematically different from the one before, although I cut it slack because our hero appears to also be missing most of his memory; this just sets the status quo to us as readers as well. Also, in most superhero comics, I honestly start to check out when we get into spaceships and alien races; I don't know why, I just do. All in all, I'm interested to see if this time around, I can find more Black Panther to love than I did last time. 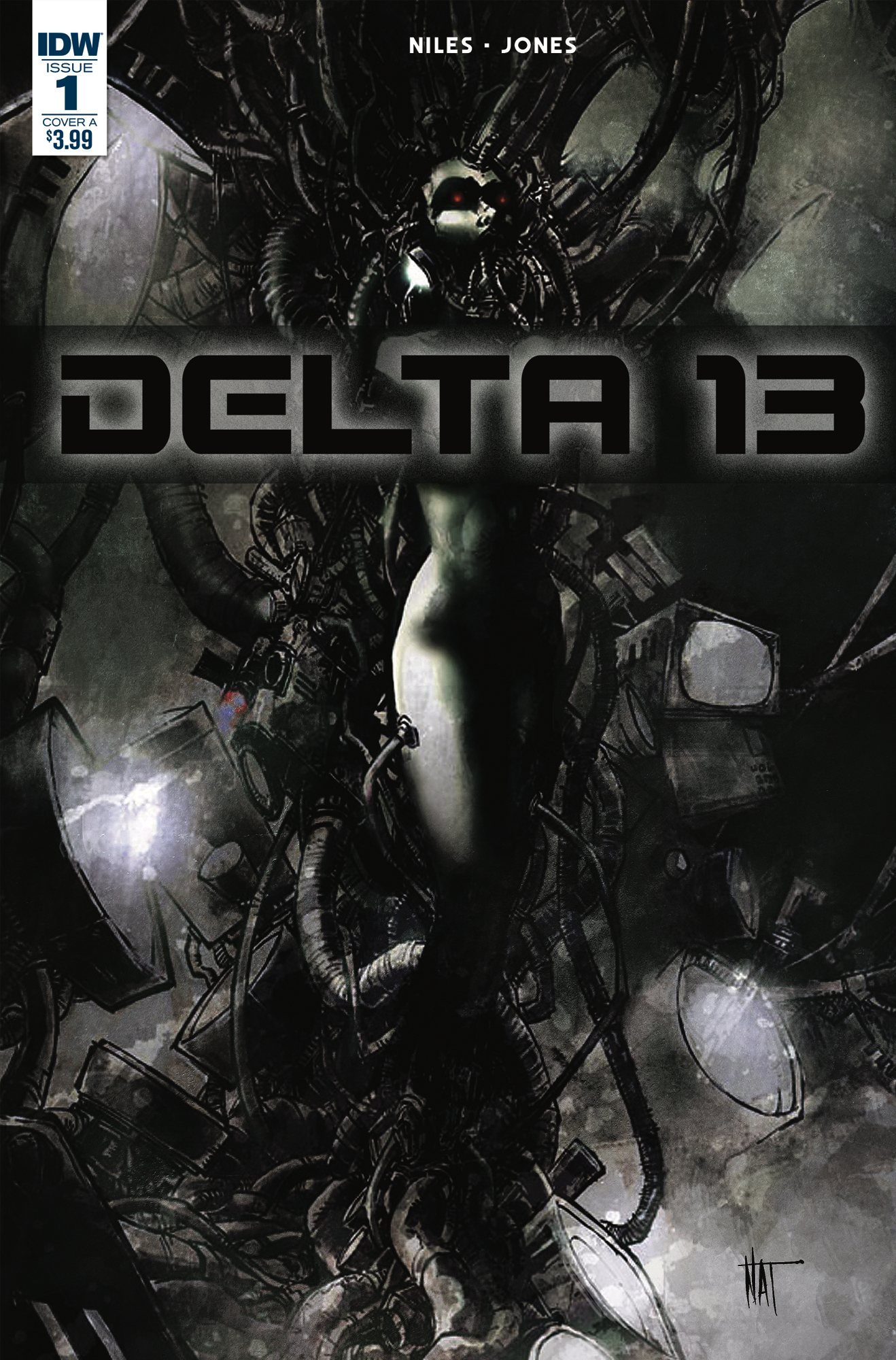 Who knows what mysteries lie deep in the asteroid belt? When a mysterious, huge, and previously undiscovered asteroid looms over their ship, a small crew of blue-collar workers discovers a terrifying threat unlike anything they've ever seen. Now, the crew must escape the asteroid, but even if they do, will they be able to escape each other and anything they bring back with them? A chilling and thrilling new tale from writer Steve Niles (30 Days of Night, The October Faction) and artist Nat Jones (Frank Frazetta's Death Dealer)!

Delta 13 is... as standard a Science Fiction story as you can imagine. Small crew in space deploying "crawlers" run into a previously undiscovered asteroid. After nearly crashing into it, they find a series of tunnels as well as a heat signature, and some sort of constructed narrow wall. Our main character, a woman named Sanders, has a family back home that she hasn't seen in a while. She and her shipmates have a decent camraderie, many of them ribbing on each other, playing games to pass the time, although we get the idea that Sanders is more serious overall. This is... literally nothing I've never read before, or seen some iteration of on a screen. The hook of finding signs of life on this undiscovered asteroid is executed competently, but isn't anything to write home about. The art on this book wasn't my favorite; it looks scratchy, and many of the characters manage to look same-y. Sometimes I'm really into this thin lined, messy look, but it just wasn't doing it for me here. The colors are watercolor-y, which does often work well with the lineart, and works well to set the dark, murky deep-space tone. But I do remember at one point coming across a panel that included a close up of Sanders' lips, and they were colored in with what was clearly photoshop brushes of varying sizes and opacities, in a way that was just... really off putting to me. I know most coloring is done digitally nowadays, but I don't like to be reminded of it so blatantly. Two of the men are difficult for me to distinguish between 90% of the time, so perhaps character design could have been more differentiated from one person to the next. All in all, there's nothing inherantly wrong with Delta 13, but there's nothing inherantly right - nothing to set it apart from anything else, no reason to really come back for more. Perhaps in future issues we'll get something with a real bite to it (pun intended, because I'm sure there's some kind of creature or monster on this asteroid that we'll soon meet, although the cover implies something a GLaDOS cosplayer might come up with), but as of right now, this is a fairly bland intro to a series, in my opinion. 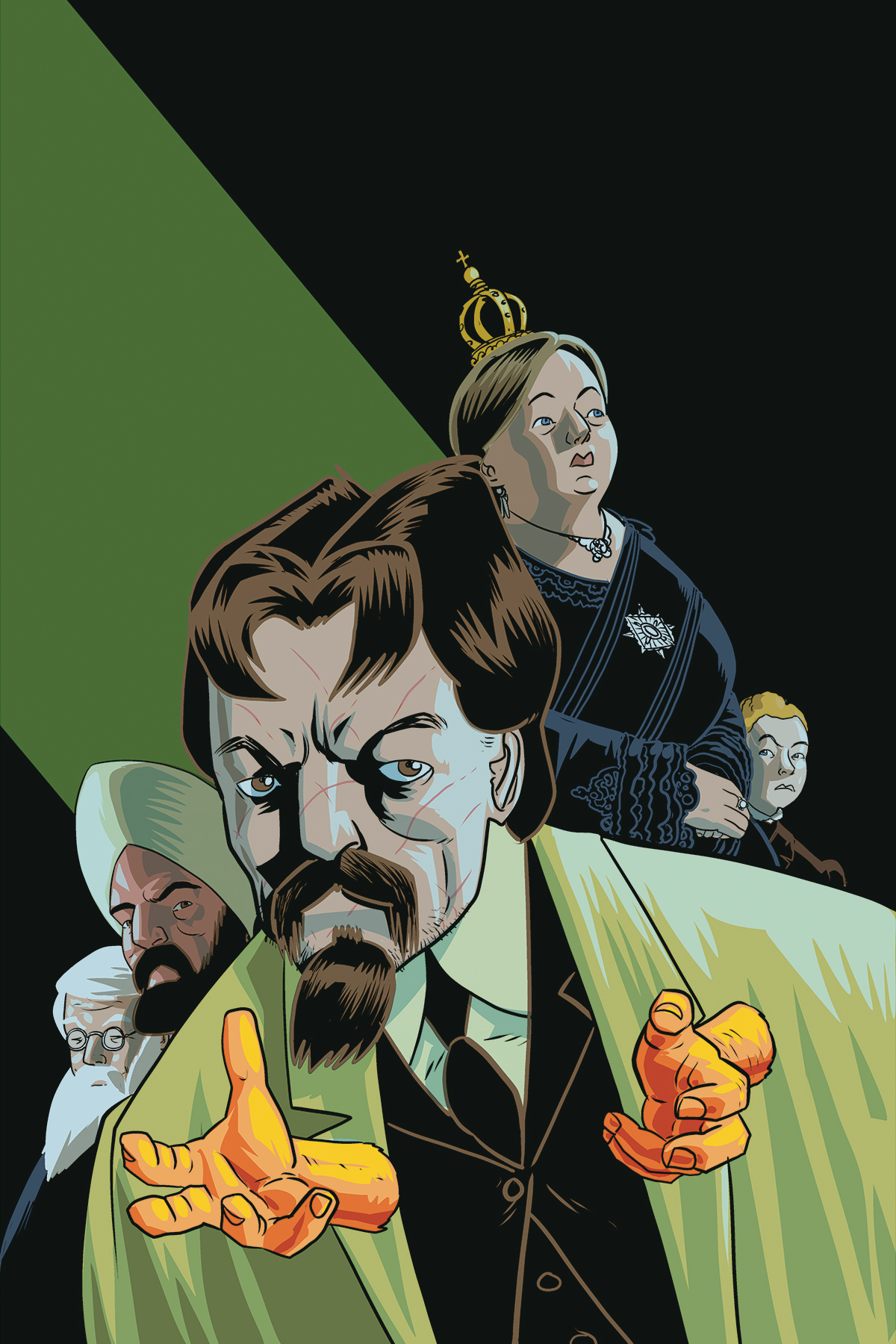 A series of occult events mystifies the man known as the Witchfinder, but even more surprising is the revelation that he is not alone in exploring the paranormal in London. When a personal invitation arrives from the palace, Sir Edward Grey is pulled even deeper into underground supernatural exploration alongside new allies in the race to stop a mad scientist from destroying London in his pursuit of mystical power.

A few weeks back, Dark Horse released its newest set of Hellboy omnibuses, collecting the stories in print in chronological order (storywise, not publication-wise) for the first time. No doubt this is meant to lead up to next year's Hellboy film, but still, it's a long overdue book that fans have been clamoring for for years, as the many and oft-updated Hellboy reading order lists to be found online can attest. And fresh of my re-reading of the stories contained in that volume, I'm feeling hungry for more of Mignola's universe, so I opted to pick up this issue of Witchfinder. The Witchfinder books are considered spin-offs to the main Hellboy series, and take place in late 19th century London, for those unfamiliar. In a time that Great Britain was plagued by murder and the occult, Sir Edward Grey is a paranormal investigator of a kind, personally employed by the royal family. In this first issue, we're introduced to a series of "ghost" sightings first at an arcane site and the next at a musuem, culminating in one casualty and two stolen artifacts. Edward Grey investigates both, suspecting they are linked, before being called in by Her Majesty personally. If you're familiar with the Mignola-verse, this seems to be yet another fun read in the same vein, and if you aren't and are simply a fan of occult stories set in foggy London, I'd say pick it up - what small references there are to Hellboy aren't distracting, and don't make the plot hard to follow in my opinion; and what can't be picked up right away are easily estabished with context clues.

Thanks for coming back to read my weekly take on a few of this week's new series! Read any of these, or something I missed? Don't hesitate to leave a comment below! Next week, I'll be out of town on vacation, so I won't have a weekly new series post included, but hopefully I'll have something else new to read, things willing. See ya next time!