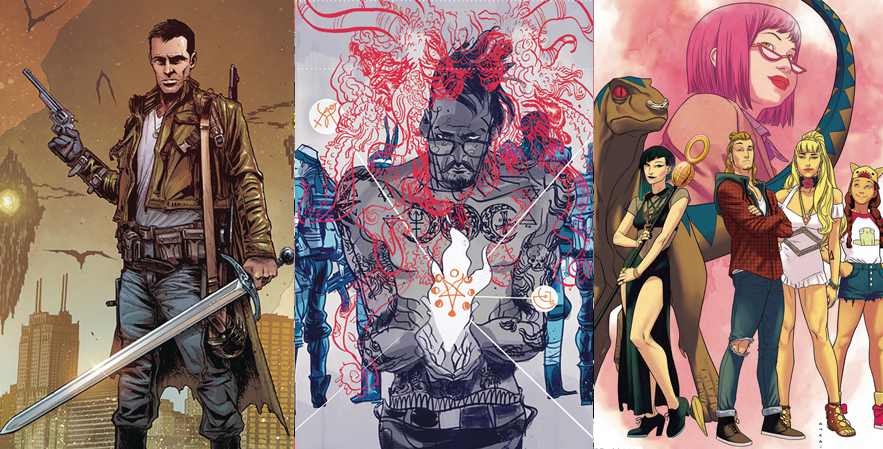 Small week this week; not as much to talk about. Most of the action is in series that are continuing this week, particularly with DC comics, with Metal #2 (and the first Metal tie-in issue in Teen Titans #12), the beginning of their long awaited Oz Effect storyline in Action Comics #987, and a Harley Quinn 25th Anniversary Special. Marvel brings us another installment in its Generations one-shots, with fan favorite Captain Marvel meeting Captain Mar-vell, and I'm also looking forward to the continuation of a favorite series I've reviewed here before, Redlands, which is back for a second issue. All in all, not a lot of new series this week. But I'm still here! Read on! 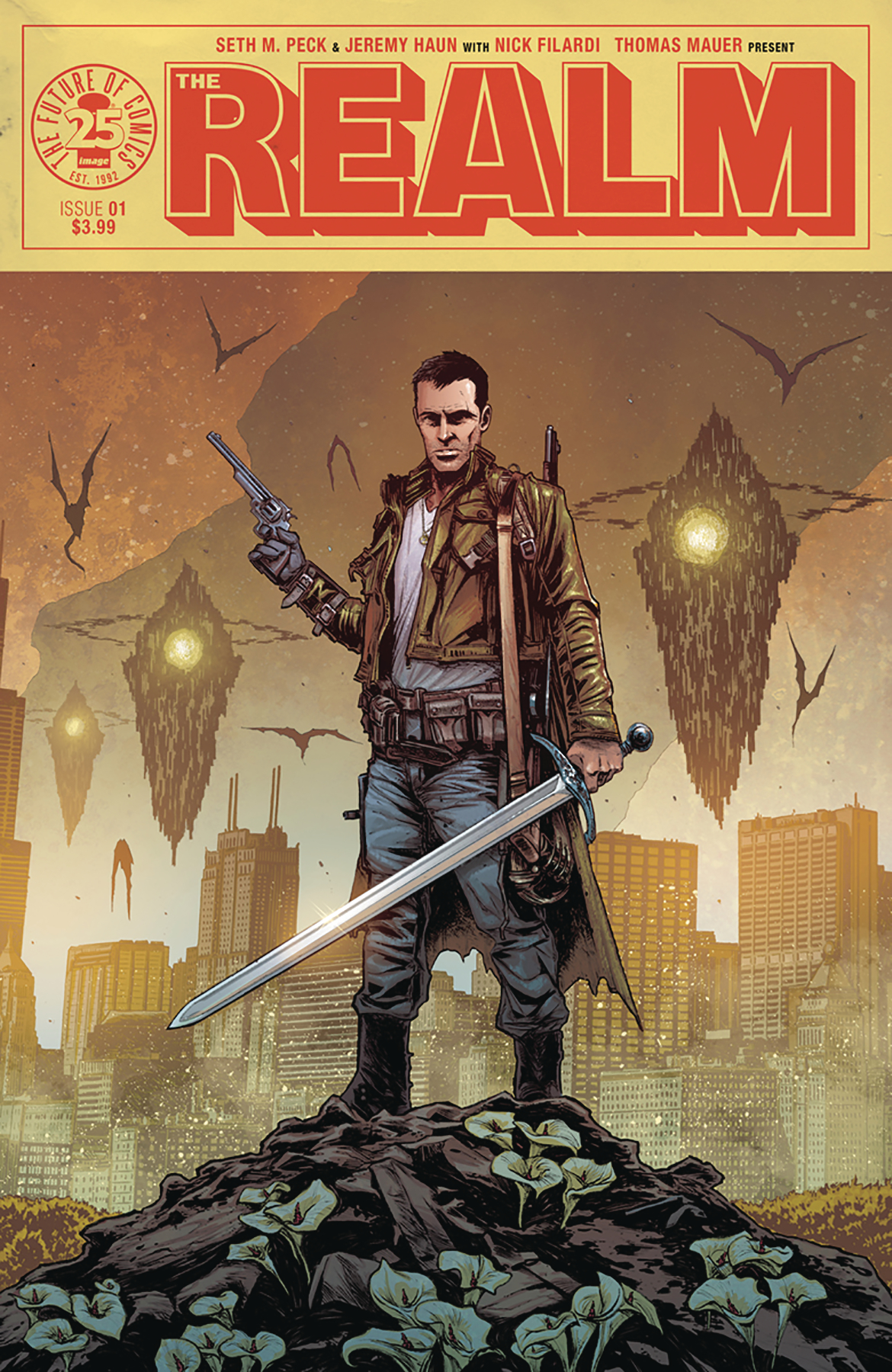 Fifteen years ago, our world was overrun by creatures of myth; orcs, dragons, and other nameless horrors threw the entire planet into total chaos. Today, the shattered remnants of civilization must fight just to survive in a deadly new era of violence and mayhem. While a powerful sorcerer marshals his forces, a group of warriors embark on a journey to reclaim our world from the growing darkness. An all new post-apocalyptic high-fantasy adventure series from co-creators SETH M. PECK (X-Men) and JEREMY HAUN (THE BEAUTY) featuring colors by NICK FILARDI and letters by THOMAS MAUER.

Issue #1 of The Realm introduces us to our main character, Will Nolan, who appears to be some sort of hero for hire (I'm not convinced mercenary is the right term), doing odd jobs for money in a world that's simply ceased to function when some sort of magic appeared, bringing with it mystical creatures of all kinds. While the who, why, and how of that remain unclear, we do get a sense that while this is a magic event, the entire book feels more like a sci-fi post apocalyptic story than anything else with abandoned buildings, men declaring themselves kings, and toothbrushes being a rare and desired commodity. If our main character is some sort of rogue, we get glances at who the rest of our party may be, with two skilled archers hiring Will to help them escort two scientists (maybe?) to another city, a man who slays orcs (are they orcs? I'm not as up on my fantasy creatures as I should be) while singing and wearing a skull mask, and finally, what is surely our antagonist, a sorcerer of some sort that summons a dark force of some kind before allowing it to possess his body. So we've got magic users, barbarian-types and perhaps even rangers. Maybe it's also a little Mad Max too, but less desert and studded leather. I think I would best describe this book as "D&D but in a modern apocalypse", so I'd recommend this for fans of either. I'm not sure it's really my type of thing, but I can see where both genres have room for a little bit of something new, so some folks mayreally enjoy this story. 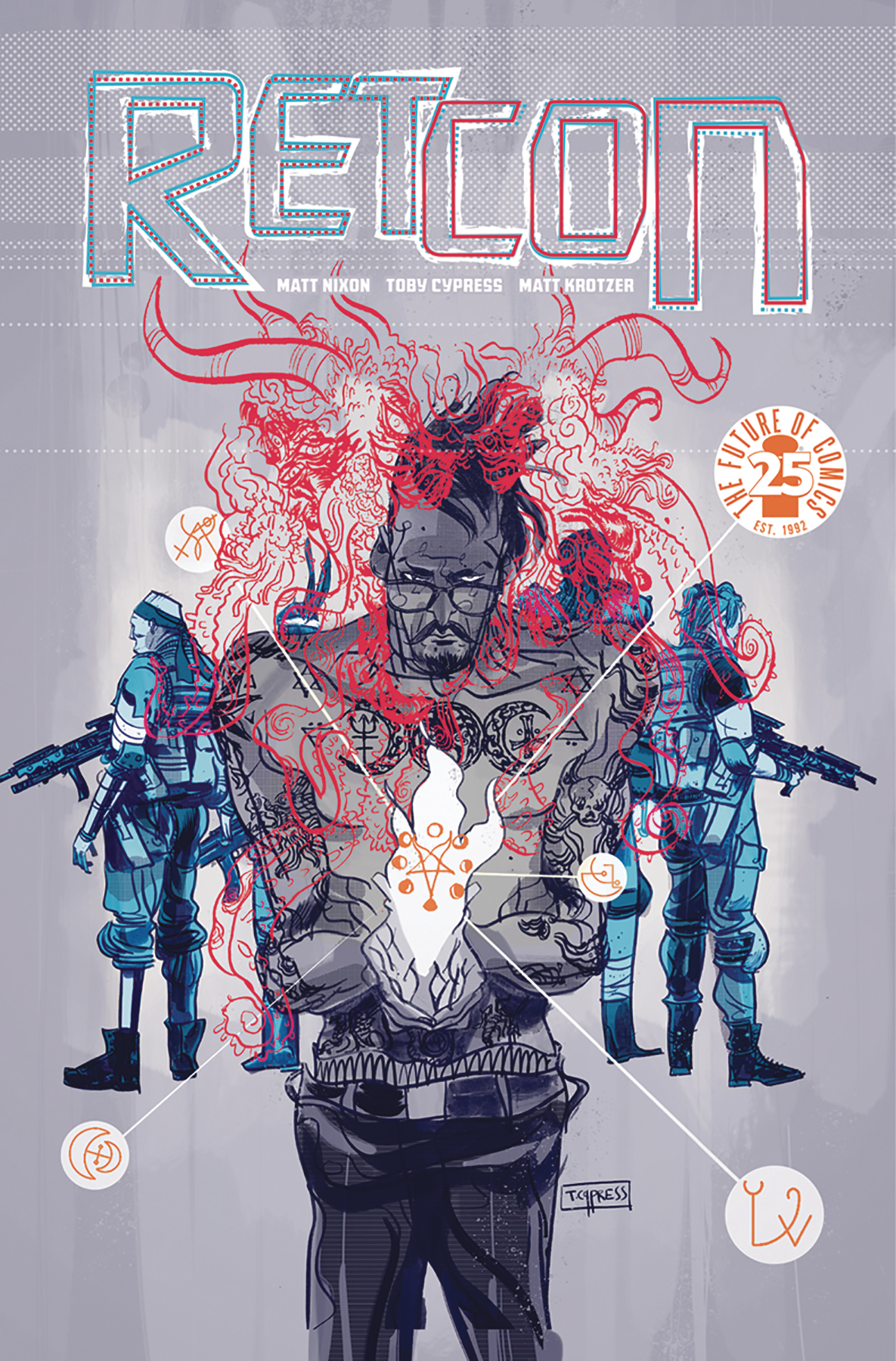 Part One-The reboot of a comic book miniseries that has never existed begins with an all-new, all-different issue #1! Time to travel back and jump in on this comic while it was new!

Retcon follows Lt. Brandon Ross, a member of a shady government agency of folks with special abilities, meant to act when bad people attempt to weaponize paranormal entities. Ross is part of a team that is given orders to terminate a previous member of the team and military vet who is deemed a risk for giving away classified information and secrets, which he does in a support group meeting. But Ross feels something is off and can't do it. We're introduced here to a world where genies, were-bears, skinwalkers and entities by the name Merry Sue all coexist. The art in this book is fantastic, and I'm interested in seeing what way this story develops, however a big gimmick of this series is that it's supposed to be a story that is retconned from the start - that is, often a story has its original iteration, and then a few years later, it gets a new iteration that resets many of the established facts of the previous storyline. We, as readers, are supposed to have a feeling of vague familiarity as if these characters have done this before, and in an interview the writer Matt Nixon described it as something similar to being trapped in Groundhog Day for the characters. But thus far, I don't feel that vibe. However, that's a pretty ambitious thing to attempt to accomplish, the idea of a story that is a retcon from the start somehow, so I'm willing to be patient and see what comes next. I'm intrigued enough by the story - paranormal monsters are a pretty good bet for drawing me in, and like I said, Toby Cypress' art is fantastic, fluid and glitchy somehow at the same time. I feel like this concept will take a while to develop but I'm game to see how it goes. 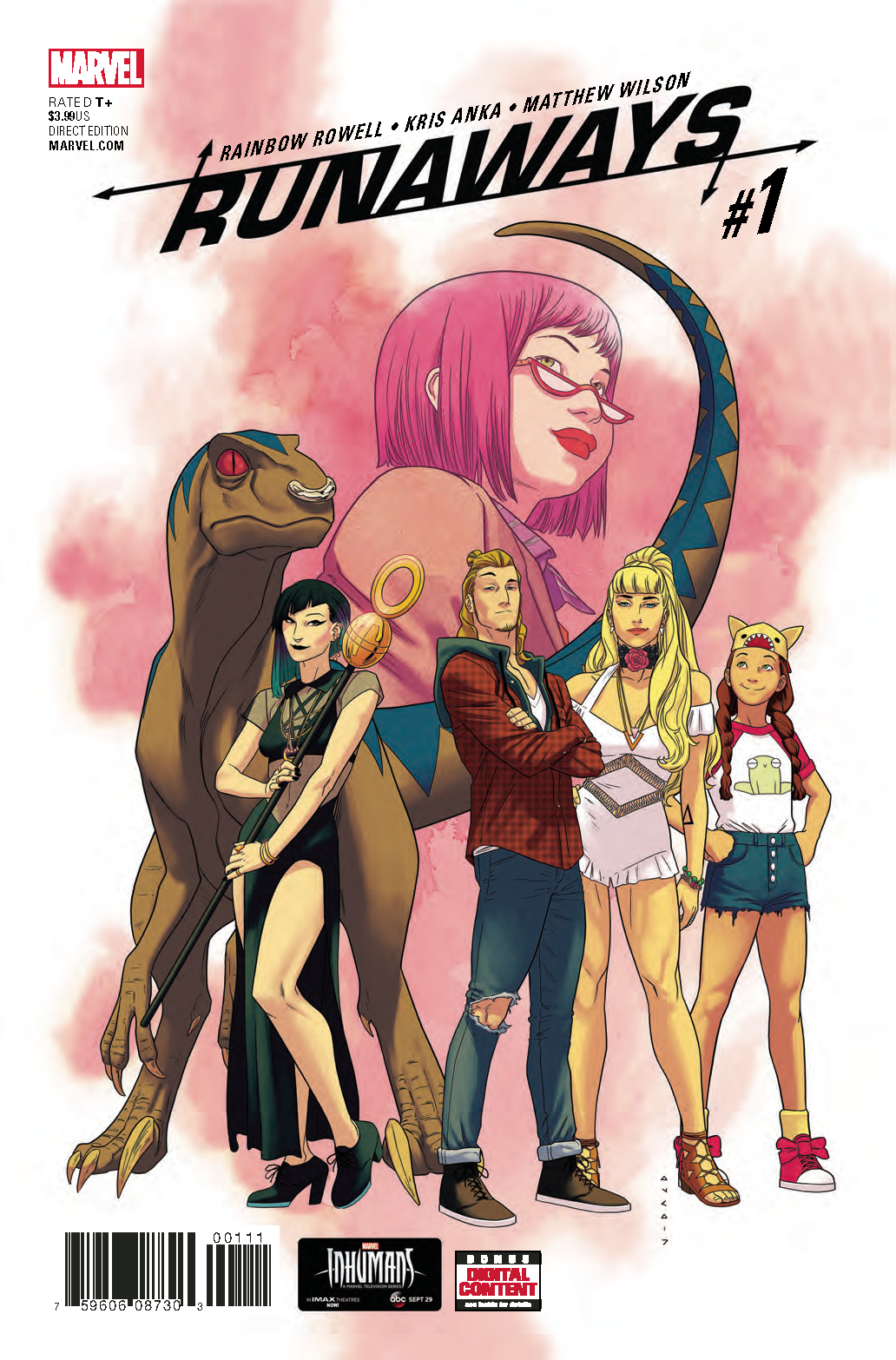 The "IT" book of the early 2000s with the original cast is back - Nico! Karolina! Molly! Chase! Old Lace! And, could it be? GERT?! The heart of the Runaways died years ago, but you won't believe how she returns! Superstar author Rainbow Rowell (Eleanor & Park, Carry On) makes her Marvel debut with fan-favorite artist Kris Anka (ALL-NEW X-MEN, CAPTAIN MARVEL) in the series that will shock you and break your heart!

I've only read the first run of Runaways, the original one from 2003. It's very good, and easy to see why it's a fan favorite. I read it shortly before the release of this comic, so I could be fresh when the first issue of this new series came out. And since it was so fresh on my mind, it was easy to make comparisons between the two. The writing on the original is very strong, with every issue feeling action packed and full of story, and the appropriate amount of romance-slash-teen-angst. But that's something Brian K Vaughn is good at, so I'm not surprised there. However the art of the early series is....frankly, hard for me to look at. I'm not the kind of person who tends to let art detract from a good comic story, and it didn't, but still, sometimes the art was distractingly not to my taste. However I felt in this issue that had been flipped. I found the art by Anka to be pleasant and colorful, with that modern look most Marvel comics have, and his interpretations of the Runaways looking older (mostly just Chase and Nico are seen in this issue) are great. But I found the issue doing something I feel like happens in a lot of modern comics - just....not much happens. Like, a lot of big things happened! We establish Nico and what she's been doing since we saw her last; Chase shows up through a time portal with Gert; she's injured and they desperately try to save her life but Nico struggles to cast a spell to help her, with the limitations on her magic. But somehow the issue didn't feel as packed with action, character, and story as I got from the previous series. It may yet pick up, and if anything, it may encourage me to go back and read previous Runaways series that I missed, as it seems to reference them pretty heavily for the plot of this series to work (a lot of time travel...not always my favorite plot device but it can work. I'm just not sure this is as strong of an issue as I would have hoped for, particularly how much buzz is around it, especially with a Runaways series in production. Then again, Vaughn's shoes are big ones to fill. I look forward to seeing what happens in this series and hopefully it'll develop more.