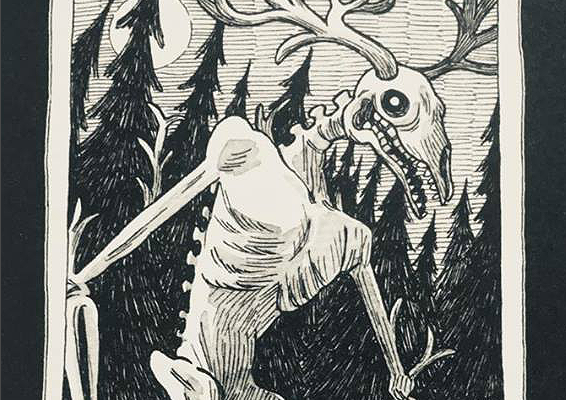 *Before I get started with my almost blatant fangirl gushing, I'm going to state that for the record, no one's paying me for anything here, and all opinions are my own. *

There's a very particular feeling around fall. Part of it is, of course, Halloween - the spooky decorations going up, the horror movie marathons, the scary costumes. But there's something else that's just a bit...creepy about autumn. Maybe it's the way the sun looks when it filters through all the turning leaves, getting darker earlier. Or the gradual feeling of the air getting colder that mimics a chill up our spine in a way that can only sufficiently be combat by a warm mug of something in between your hands. Even the smell of the leaves changing themselves, it's a kind of death smell, simultaneously comforting and crisp AND a little bit rotten. In so many ways, not just Halloween but the whole season of fall is a celebration of death, and many cultures and religions across the world seem to agree, so there must be something to it. But all good things must come to an end, and somewhere in December we start seeing a little less orange and brown, and a little more red and green, and whatever dark magic that holds our moods is suddenly well and truly gone. And I know I'm not alone in saying that I spend the rest of the year waiting for that feeling to return.

Luckily for me, there are plenty of things I can do to stay spooky year-round. For one, I'm addicted to watching youtube videos of weird stuff, everything from paranormal encounters to internet mysteries. I also am a bit of a true-crime addict and have probably seen every episode of Forensic Files more times than is healthy. And as a manager of a comic book store, I consume tons and tons of horror comics. But of the many things that I partake in to keep the whiff of weird present in my life, one of my favorites is to listen to the podcast Lore, written and produced by novelist Aaron Mahnke. 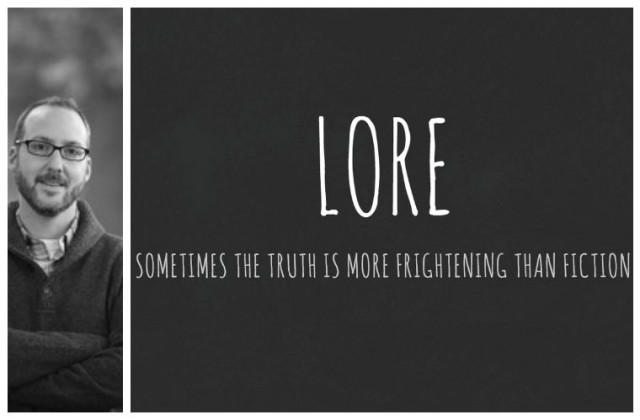 I'm a longtime listener to the show, it was recommended to me by someone when there were only two episodes out. I listened to those two episodes over and over... and over... until the next one, and then I listend to those three on repeat and so on and so forth, telling everyone I could about how much I loved it. It really just scratched a particular itch for me, I suppose, somewhere between Mahnke's gifted storytelling and the topics he chose to cover. And that's a real strength of the show - its diverse content. Horror is such a brilliant - and difficult - genre because everyone is scared by something so different. This is why it's so hard for me to take reviews of horror movies seriously; what one person swears scared the pants off of them might, to someone else, be yawn-inducingly cliche. Lore covers a broad spectrum of the strange, from the rumors, superstitions, and folklore to hard facts. Subjects range from the supernatural, paranormal and occult to real life monsters like serial killers. Even if you're like me, and not easily frightened, there's sure to be something of interest, and something new to learn. In complete honesty, listening to the new episode every other week on its release let me feel, for just a moment, the cool autumn breeze, and imagine for a moment that something really could be out there, behind that tree, around that corner, just across the way.

In terms of the podcast itself, the audio production is really nice, with appropriately eerie background music. I know many people feel Mahnke's voice isn't for them, however it works for me, and I listen to the show to fall asleep just as often as I do on my commute, like someone telling me a spooky bedtime story. I would love to hear him narrate any of the "Scary Stories to Tell In The Dark" books.

Clearly, I can't be the only person who feels this way - Lore topped the iTunes podcast charts for quite a while, prompting Mahnke to begin traveling to do live shows, and it wasn't long after that before it was picked up as an Amazon Prime exclusive television show, by folks who were driving forces behind The Walking Dead and, my personal favorite, The X-Files. There is also now a book series, bringing the podcast back to Mahnke's roots as a writer, rounding off the trifecta of ways to bring Lore into your life. Both the book and television show were released recently, with the book debuting only ten days ago as of this writing, and the show premiering, appropriately enough, on Friday the 13th. 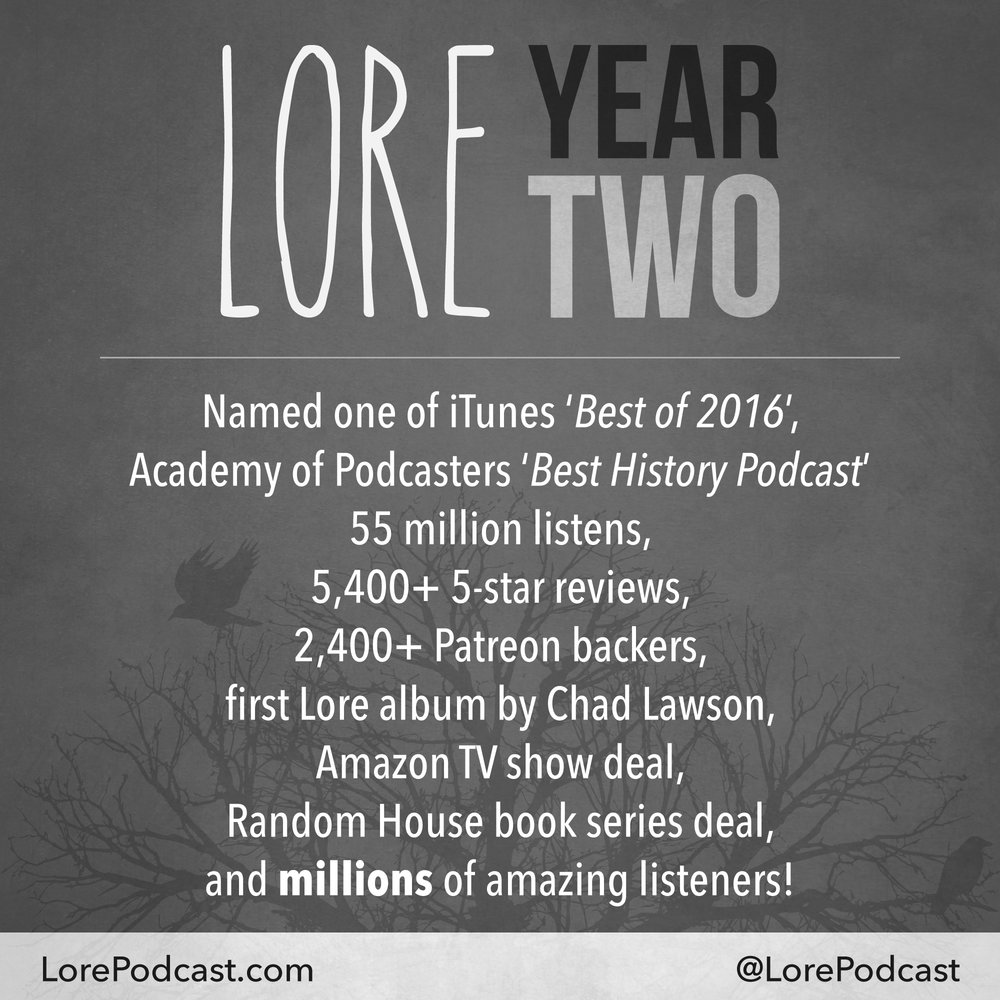 I had the opportunity to meet Aaron Mahnke, albiet briefly, at NYCC this year. I knew he was doing a panel, but had no idea the book would be available at the con, a few days early, and that he would be there to do signings. I also had no idea that Amazon Prime was going to have an interactive exhibit, a sort of museum, dedicated to the release of Lore; one that was perhaps too popular for its own good, as many people waited for hours in line nearly every day only to be turned away with the con closing down (myself included!) The whole experience got me even more hyped for Lore than I was already, and I was certainly excited. Mr. Mahnke was exceptionally kind, even though I was exhausted, a little greasy, and suffering from a severe lack of coffee when I met him, and to be honest, having been an early listener of the show, I almost felt a weird sense of parental pride getting to meet him, and see all this Lore stuff around, as if my baby (or in this case, the baby of a friend) was growing up - I can only imagine how Mahnke must feel, himself.

The awesome thing about the first World of Lore book, "Monstrous Creatures", is that while it does collect and transcribe several well beloved episodes of the show, there are a few things sprinkled throughout that feel fresh and new, like the short "The Trees" at the end of the book's first chapter. Some segments feel a little more fleshed out than their respective podcast episodes did (although perhaps that's more memory loss on my part). The illustrations throughout by M.S. Corley, are also charming and add a lot to the book's vibe. 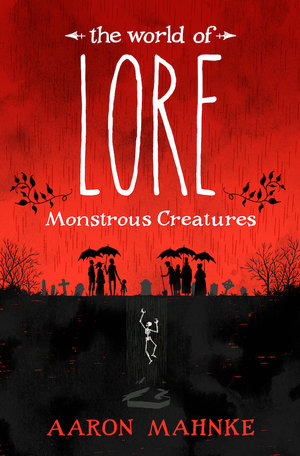 And if the book being a little more substantial in content than the podcast excites you,then wait til you see the television show. While only 6 episodes long, each ~40 minute episode is just as well put together as the podcast, and oftentimes includes extra anecdotes and historical explanations to further contextualize the episode's subject matter, in a way the podcast's standard 20-30 minute runtime might not be able to. It's supplemented with the occasional documentary footage, and has awesome animation and effects, not to mention surprisingly well done re-enactment segments. Seriously, the historical re-enactments were the part of the show I was most concerned about, but I feel like everything was super well pulled off. 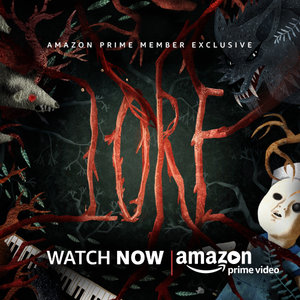 Clearly, I'm biased -- I loved Lore, the podcast, so it's a safe bet that I would love the book and television show. But I didn't expect to be as pleased with them as I actually am. They're familiar, but new, like a good urban legend or scary story, and if you haven't ever tried the podcast before, I recommend that you do - or if podcasts aren't your thing, now's the perfect time to try the book or television show. Grab some hot chocolate, bundle up, and enter the world of Lore. Perpetual autumn awaits.